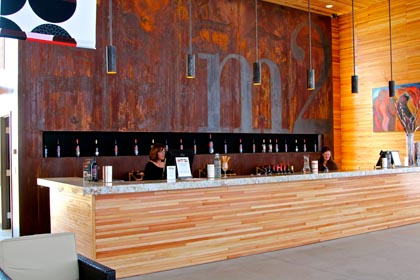 The new m2 Wines winery and tasting room, located at 2900 E. Peltier Rd. (just north of the town of Lodi), is a low slung, rectangular, 6,000 square-feet affair; looking like a gigantic lego brick with a square hole near the middle, plopped down on an open field of flowering mustard (a surrounding vineyard is planned as phase 2), yet every bit as congruous against the Lodi landscape as an Andrew Wyeth house/barn in Maine. 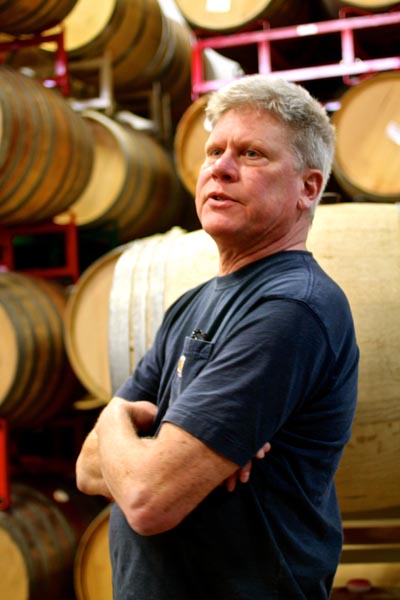 "It's a helluva lot easier to work," says m2 founder/owner/winemaker Layne Montgomery, comparing it to his original winery space, in an industrial warehouse on the east side of Lodi. "This place is built for only two things – to make wine and sell it, not to hold weddings or concerts."

Looking up at the ceiling, topping 25-ft., Montgomery points out the practicalities of customized architecture: "The ceiling is 4 and a quarter-inch thick, the walls 3 and a half inches thick – all pre-fab, tongue-in-groove, steel clad expandable foam panels providing maximum insulation. There's natural lighting coming through portals at the top edges, minimizing use of our LED floodlights – very energy efficient. I could kiss the epoxy sealed, anti-microbial floor for making winemaking so much easier… plus floor drains where they're supposed to be, between the barrels and tanks."

At the same time, m2's new winery is expressly built for the winery's current boutique-sized production, about 4,000 cases a year – the perfect comfort level, where Montgomery and his small crew can continue to execute truly handcrafted wine.

Adds Montgomery, "my partners – brothers Ted and Terry Woodruff, and Steve Stiles – deserve all the credit for making this building happen. The response has been more positive than what we even expected – since opening in January, the place has been packed every weekend, four times more than what we ever got during our 10 years at the old place. And we don't even have a paved parking lot yet! (There currently is ample graveled space… one step at a time for the partners, who are clearly putting the horse before the cart).

"Before, we would only get the most knowledgeable wine lovers, who took the trouble to find us. Now we're also getting knowledegable newbies. I think we're helping to create a new Lodi Wine Country corridor along Peltier Rd., sort of like Harney Ln. in the south. Hardcore Lodi wine lovers can start at Acquiesce and Macchia on the east side, and go west over Hwy. 99 to find us, and LangeTwins' new tasting room." 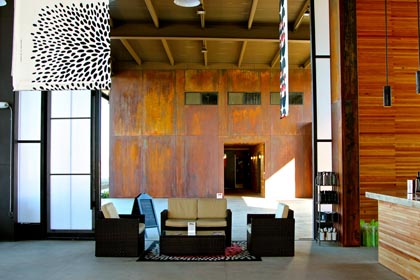 Looking at m2′s winery through opened doors of tasting room

But if anything, m2 Wines will always remain something of a connoisseur's brand; especially as long as its primary vineyard source remains Soucie Vineyard, a 98-year old Zinfandel planting located at the farthest western edge of Lodi's Mokelumne River AVA. This growth – once one of Michael David's 7 Deadly Zins (a popular bottling that has long since outgrown the Phillips family's original seven vineyard sources) – is known to produce one of the most unique Zinfandels in California: distinctly earthy yet plush, expansive red wines, always layered, supple, fluid, bouncy, and uncannily buoyant – like the veritable mattress balanced on a bottle. 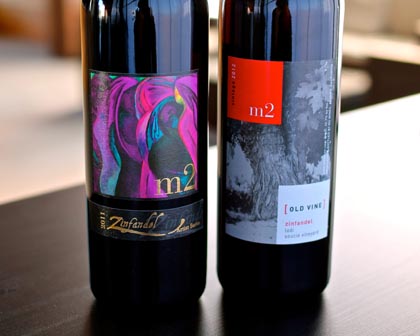 The newly released 2012 m2 Soucie Vineyard Lodi Zinfandel ($28) has all the features: lush black cherry/raspberryish fruit tinged with peppery spice and just smidgens of loamy/composty earth – what Montgomery affectionately calls "Soucie stink" – embedded in a rounded yet zesty medium-weight body (at 15.1% alcohol, not at all over-the-top). "The acid was in the zone in 2012," says Montgomery – "the Soucie is tasting fresh, even edgy because of that."

The current release of Montgomery's top-of-the-line – the 2011 m2 Artist Series Lodi Zinfandel ($35) – is composed of about a third each of fruit from Soucie's 1916 block, Maley's Wegat Vineyard (the same planting that goes into Maley Brothers and Macchia's Voluptuous), and Mohr-Fry Ranches' property at the end of Devires Rd. (far west side of Lodi). The combination, almost strangely enough, tends to produce a Zinfandel that is not only earthier than m2's pure Soucie bottling, but even lusher, plusher, and rounder: pungent black cherry fruit is mixed in the nose with almost Tootsie Roll-ish chocolaty and the loamy notes; the zesty fruit seeping through fleshy layers on the palate.

Increased tasting room traffic also has Montgomery thinking about more single-vineyard bottlings, to keep return-visitors coming back for new things. If or when this happens, Lodi Zinfandel lovers will be able to experience even more variations of the more delicate, fragrant style for which the region is becoming increasingly known. A barrel tasting of m2's 2012 Century Block Zinfandel – from a +100-year old vineyard on the east side of town – was much more of a feminine, silky yet bony, "pretty" style than m2s west side cuvées, with a red cherry perfume punctuated by roasted coffee tones. Says Montgomery, "I don't know if people would even spot this as a Zinfandel – there's a leanness to it, but it has the finish of a Zinfandel." 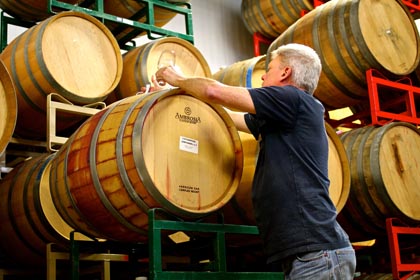 In 2013 both Montgomery and Fields Family's Ryan Sherman took their first small crop from the Stampede Vineyard: a 1940s-era vineyard located on an isolated, Mokelumne riverside bed of sandy loam in the more rolling Clements Hills AVA (Morgan Twain-Peterson of Sonoma's Bedrock Wine Co. is now taking most of Stampede). A barrel tasting of m2's 2013 Stampede revealed an ultra-fragrant wine with a flowery, violet candy-like note, tinging raspberry and black licorice aromas; tasting bright, upbeat, medium-full on the palate. Montgomery contrasted this with tastes from his 2013 Soucie Vineyard barrels; which, in the comparison, were less fragrant but denser, meatier, deeper toned wines – "still tasting like angry, young, fermenting juice," according to Montgomery… "typical Soucie."

Stepping out into the open space dividing the wine production area from a spacious, airy, high ceilinged tasting room, a whistling freight train suddenly thundered by. "Well, that's all part of the Lodi Wine Country experience, too," quipped Montgomery. "If you stand on the other side, from the crush pad you can see hang gliders plunging to their death over Lodi Airport, just a couple miles away." You can take Montgomery out of a warehouse, but not the Montgomery out of Montgomery – a Lodi personality every bit as different as the wines themselves. 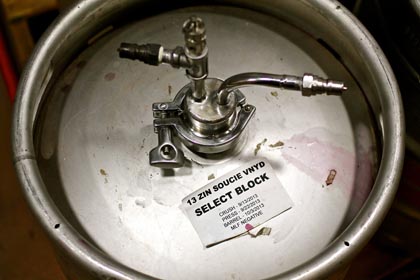