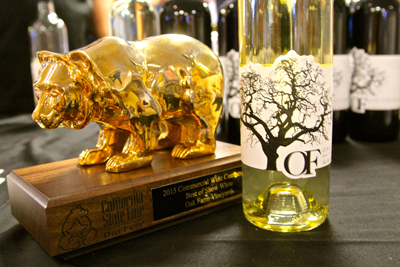 At the The Best of California Awards Ceremony this past Tuesday, June 23 in Sacramento's Cal Expo, a significant number of Lodi AVA grown wines were awarded Blue Ribbons or Golden Bear trophies for finishing at the very top of several categories at the 2015 California State Fair Commercial Wine Competiton. 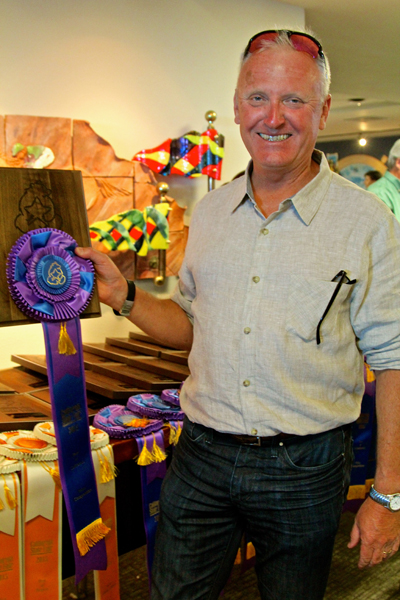 At this year's competition, 72 judges sniffed, sipped and evaluated 2,881 wines submitted by 743 participating winery brands. The tasting format is "blind" – judges are not biased by knowledge of the brands or regions from where each wine comes.

It was a 3-day process (June 3-5, 2015), ending with the sifting through of the best of 254 Gold and 57 Double Gold (when all judges in a committee agree that a wine deserves a Gold) medal winners to determine "Best of" wines by category, region, and the entire "Show."

Yet Lodi also garnered its share, including a "Best of Show White" going to the 2015 Oak Farms Lodi Albariño; and in "Best of California" categories, for Lodi grown wines produced by Lodi's Bokisch Vineyards and Michael David Winery, plus winery/brands based outside of Lodi (but utilizing Lodi fruit) such as Fenestra, Torn and Wise Villa.

According to Mark Chandler, the California State Fair Chief Judge (also a Wine Business Consultant as well as the City of Lodi's current Vice Mayor), "Lodi wines are finally getting that recognition that they are due… it gives Lodi bragging rights."

For the record, the California State Fair Wine Competition is the oldest (since 1855) annual wine judging held in the U.S.; and considering the fact that California produces over 90% of the country's commercial wines each year, it is one of the most prestigious.

For a complete listing of all the medal and blue ribbon winners, please visit the California State Fair Commercial Wine Results.

Below are our own tasting notes on the Lodi grown wines finishing at the very top of their respective categories in the 2015 California State Fair Commercial Wine Competition. 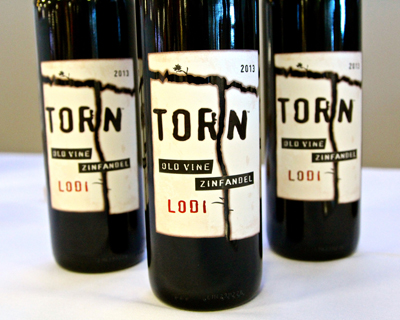 2014 Oak Farm, Lodi Albariño ($19) – The selection of this wine as the very best white wine of any type in California is a big victory for Lodi – a region most consumers and critics associate more with red wines such as Zinfandel. Albariño – a grape native to the Rías Baixas region at the north-west tip of Spain (along the Atlantic Ocean) – is now grown successfully (albeit in small quantities) all along the California coast, from Santa Barbara to Mendocino; and so what did the judges like about Oak Farm's? This Albariño is bone-dry yet light, airy and lemony crisp with a faint mineral feel, and delicate perfumes of white flowers and white peach skin. The judges responded positively to the wine's balanced, finesseful feel, and lauded its purity of varietal character, unobstructed by excesses like oak or high alcohol. Finally, giving credit where credit is due: Oak Farm winemaker Chad Joseph tells us that two-thirds of this wine came from Portuguese clonal material grown in Ron Silva's Silvaspoons Vineyards in Lodi's Alta Mesa AVA, and the rest (a Spanish clone of Albariño) was grown by Jonathan Wetmore's Round Valley Ranches. 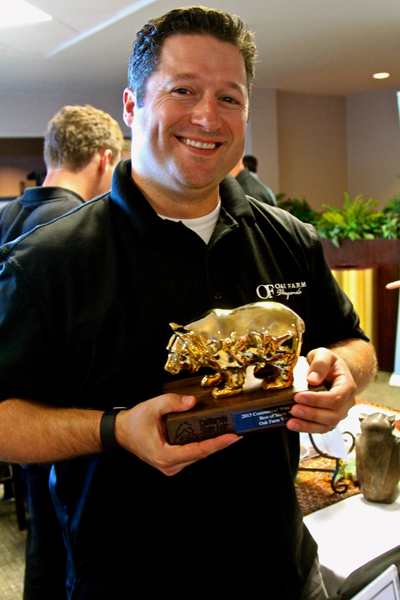 2013 Torn, Lodi Zinfandel ($9) – This is not the first time a Delicato Family Vineyards brand crafted for the $7.99 or $8.99 market has taken top honors like this – "Best Zinfandel" in all of California (getting the nod over Zinfandels more than twice the price) – and it undoubtedly won't be the last. The 2013 Torn is grown in Lodi, after all – the home of more acres of 40-plus-year-old Zinfandel vines than any other region in the state – and Delicato's winemakers are able to blend from extensive lots to craft lush yet balanced styles of the varietal. The 2013 Torn's fruit definition is as bright and inviting as its purplish ruby color – black cherry veering toward blackberry, with just a slight jamminess – with plump, juicy, zesty sensations teeming out from an easy, pliant, medium-full body.

2012 Michael David, Rapture Lodi Cabernet Sauvignon ($59) – Michael David's ambitious little army of growers and winemakers, led by the Phillips family, has never made any bones about the intent of this ultra-premium priced, meticulously crafted varietal: they want you to feel the sumptuous quality of Lodi grown fruit like a religious (i.e. rapturous) experience. And its qualities are compelling – beginning with a multifaceted nose of concentrated blackcurrant-like fruit, notes of smoky cigar box, the grape's sweet mint/herbaceousness and subtle touches of cedar, and ending with deep, lush yet fluid sensations framed by sturdy tannin and a medium-full body. This is not "Napa Valley," which tends to produce edgier, more dramatic styles of Cabernet Sauvignon; nor "Paso Robles," where Cabernet Sauvignons that blast the palate with silken-sweet varietal sensations are frequently made. Rapture is very much "Lodi" in its gently rounded, luxurious texturing – couched in a wealth of French oak that Cabernet Sauvignon lovers crave – and therefore should be appreciated for being a top flight example of Cabernet Sauvignon from Lodi as much as the entire state of California.

2013 Michael David, Inkblot Lodi Cabernet Franc ($35 ) – For most wine regions in California, it's darned near impossible to produce a thick, inky, fruit focused style of Cabernet Franc – a Bordeaux grape that, more often than not, wants to taste more like fresh-cut bellpeppers than berryish fruit, when grown in California's fertile soils. There are a few terrific examples, of course, grown in more rugged slopes in parts of Napa Valley, Lake County and Paso Robles; but in Lodi's deep, porous, sandy loam soil, the Phillips family has been proving, in recent vintage after vintage, that this grape can thrive and produce a wine of almost unexpected depth and sturdiness. The 2013 Inkblot is aptly named – a black purplish color, signaling a remarkable concentration and focus of raspberryish fruit enriched by mildly smoky oak spices 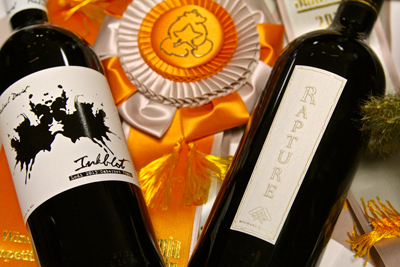 2013 Wise Villa, Alta Mesa-Lodi Malbec ($32) – Wise Villa is located on Wise Rd. in Lincoln, which falls within the Sierra Foothills appellation; but credit for farming of this Malbec goes to Ron Silva's Silvaspoons Vineyards in Lodi's Alta Mesa AVA. This is not a big, blustery style of Malbec most consumers are familiar with in Argentine bottlings; but rather, more of a finesse style, medium bodied Malbec, exuding ripe blackberryish fruit tinged with flowery, dried hibiscus-like notes and cedary oak, with moderate tannins shoring up a balanced feel.

2012 Bokisch Vineyards, Lodi Graciano ($23) – In Spain, the Graciano grape is grown as a companion to deepen Tempranillo based red wines, which was Bokisch Vineyards' original thought when they planted the two varieties in their Las Cerezas (in Lodi's Mokelumne River AVA) and Terra Alta (Lodi's Clements Hills AVA) Vineyards. To see Markus Bokisch talk about Graciano grapes, watch this video on All need to know about Graciano. But five or six vintages ago, Graciano began to emerge as a more-than-stand-alone varietal for the Bokischs; consistently producing a varietal red, like this 2012, of curvaceous, downright sexy layers of plummy, flowery scented fruit, with complexities suggesting Mexican spiced chocolate and sweet, almost cumin-like earthiness. Both tannin and body are moderate in scale, and so the wine is a delight just to sip and savor with easy aplomb as much as absorbing curiosity.

2014 Wise Villa, Alta Mesa-Lodi Torrontes ($29) – Because of their multiple Gold and "Best of" award winners, Lincoln's Wise Villa Winery also took a Golden Bear trophy for being the California State Fair's 2015 "Winery of the Year." They also show impeccable taste by sourcing their Torrontés grapes from Silvaspoons Vineyards in Lodi's Alta Mesa AVA. Their 2014 edition is their most luscious rendering yet – gushing with tropical papaya and honeydew melony fruit with white pepper and musk spices, sliding onto the palate with lush, round, off-dry, easy-going sensations.

2010 Fenestra, Lodi Tempranillo ($22) – While located in Livermore Valley, Fenestra Winery has been sourcing Portuguese and Spanish grapes from Lodi for years. This one, grown by Lodi's Bokisch Ranches, is a suave, fruit focused rendering of this Spanish grape; couching red berry qualities in a medium body and smooth, suede-like textures. 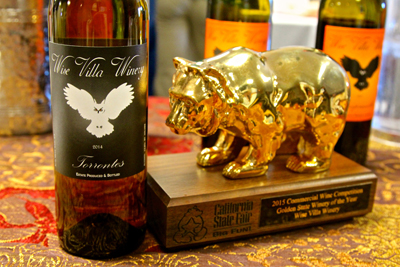