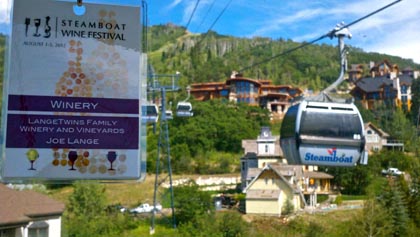 Winter, spring, summer or fall, a visit to Steamboat Springs – a 6,732+ ft. elevation ski resort/community in the Rockies of Colorado – is a breathtaking affair.  Especially if you happened to participate in the Mud, Sweat and Cheers event that was part of the yearly Steamboat Wine Festival, which took place this past August 2-5. 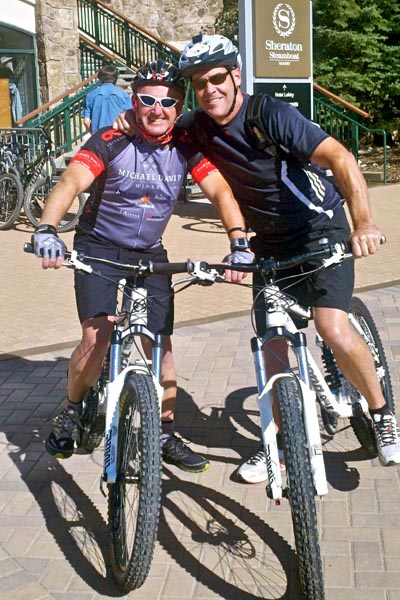 The mud, sweat and cheers were supplied by three vintners who were among the contingent of the seven wineries representing Lodi, and its “LoCA crazy-by-the-barrel” energy, at this mountain high festival:  Joe Lange of LangeTwins Family Winery & Vineyards, Michael McCay of McCay Cellars, and David Phillips of Michael David Winery.

Lange, McCay and Phillips led 15 wine lovers through what has to qualify as the most strenuous wine seminar in the world:  starting with a 2 hour mountain bike ride through the trails of Mount Werner, which was only then followed by a presentation by the winemakers and lunch at one of Steamboat Springs’ premier restaurants, the Truffle Pig.

In an article that appeared on the front page of the local paper, the Steamboat Pilot & Today, the wine lovers were said to have gathered at the top of the gondola of Steamboat Springs’ famous ski resort, where Mr. Lange greeted them by saying, “you’ve got to work hard… I want everyone to come to lunch… a little sweaty, a little dirty.”  And so, led by the three vintners attired in colorful cycling jerseys, emblazoned with their winery logos, the group biked over the mountain, with the taste of Lodi wines and their gourmet lunch waiting for them as a reward at the end of their arduous exercise.

Donn Wiese, who came with his wife Helene from Golden, Colorado, was quoted to say, “it was a totally new experience… and the scenery, holy cow… we’ve never been to Steamboat in summer before.”  Ms. Wiese chimed in, saying “I loved it… it was so cool… to go out on a mountain like that.”

Says Lange, of this most unusual “wine seminar,” “it was great to get out on a bike and talk to people in a setting that’s not a booth setting.”  Mr. McCay agrees, telling us, “it was work, but fun, too… I’m definitely coming back (to the Steamboat Wine Festival) next year for sure… it’s a slam dunk, just because of the way I’ve been treated.” 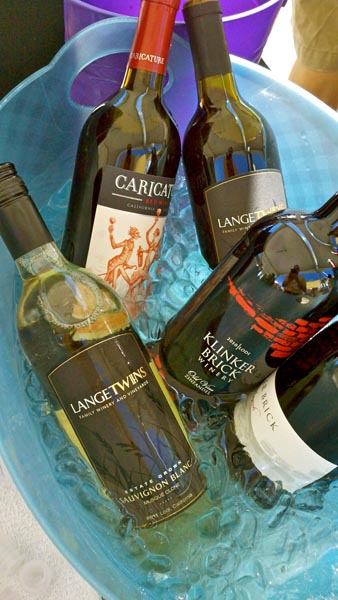 One of the Lodi wines featured at the Truffle Pig lunch was the 2011 McCay Lodi Rosé ($18), one of the finest dry pink wines made in the world today, vinified primarily from phenomenal 109 year old Carignane vines owned by Jean Rauser:  teeming with fresh strawberry fruitiness, tasting light, lithe, lush and juicy in the mouth.

Back home in Lodi, David Phillips reminisced enthusiastically about the experience, telling us that “it was a fantastic event… we were swamped by people telling us how much they loved our wines – telling us that the Lodi wines were the best wines at the festival (there was a total of 30 wineries, from around the world, showing in Steamboat Springs), and that they would be coming out to visit us in Lodi soon.”

Lodi was also represented by d’Art Wines, Jessie’s Grove Winery, Klinker Brick Winery, and Van Ruiten Family Winery; putting on a total of four seminars, which included the mountain bike ride as well as a hike, and participating in the Steamboat Grand Tasting, attended hundreds of consumers from far and wide:  work hard, playing harder!

Phillips also noted that Bob Lauchland, a fourth generation Lodi grower (with his brother, Richard Lauchland), was also at the wine festival.  “The fact that Bob was there, cheering us on, demonstrates the solidarity that exists between Lodi wineries and growers… we are all working together towards the same goal,of expanding the appreciation of Lodi wines wherever we can.” 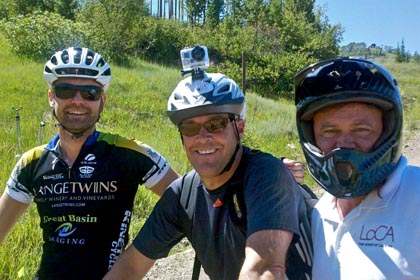