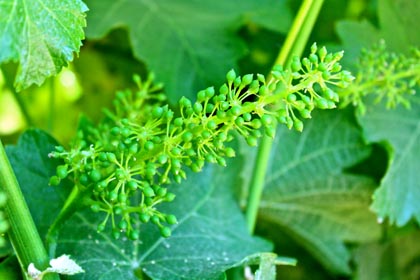 Summer officially arrives in three scant weeks (June 20, 2012).  What will you be drinking?

In a region fast becoming known for its variety, from Albariño to Vermentino, there is one Lodi grown wine that has become the dependable mainstay for its exceptional quality – purely as a wine, and also for its palate soothing taste – as well as reliably great price:  the Sauvignon Blanc cultivated by fourth and fifth generation Lodi growers, the Lange family. 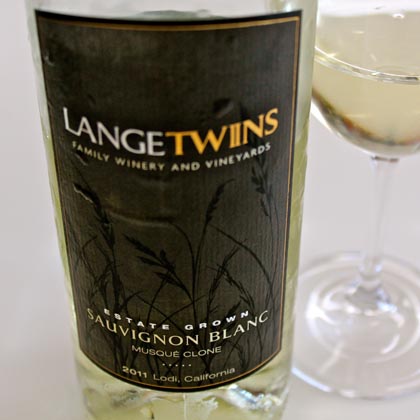 The 100% estate grown 2011 LangeTwins Lodi Sauvignon Blanc ($13) is already perking up for the season of toothsome salads in refreshing vinaigrettes, or fresh seafoods, hot or cold, braced by salsas or simple twists of lemon:  a white wine tasting of lush honeydew and wedges of fresh apple laced with its own lemony nuances; and a taste that is bone dry, bright and zesty with dancing, tingling, citrusy sensations – not too heavy, not too light, but just right (at 12.9% alcohol).

Earlier this week David Akiyoshi, LangeTwins Family Winery & Vineyards’ winemaker, walked us out into their Jahant Woods Vineyard just north of Peltier Rd. to look at the recent fruit set of their Sauvignon Blanc grapes.

Taking hold of a tiny developing cluster – with miniature green beads that will soon grow into individual grape berries – Akiyoshi tells us, “looks like a good, healthy set.  Flowering occurred about three weeks ago (early May 2012) – I can usually tell when that’s happening when I start to sneeze.   This year the weather has been ideal – temperatures in the 70°s, 80°s, no rain or cold – unlike last year (2011), when the weather was lousy, making flowering extremely problematic.  Last year fruit set was more protracted, giving us grapes of extremely variable ripening levels – in the same blocks, and even on the same vines.”

Akiyoshi continues:  “Sauvignon Blanc is one of the first grapes to set fruit.”  By way of explanation, he shows us the LangeTwins Cabernet Sauvignon in a block right next to their Sauvignon Blanc, which has its little green beads of self-pollinated fruit that are still attached to their tiny white petals and calyptra (see photo below).  “You can see that the Cabernet has just begun to set its fruit, and it’s also looking good.  The white wine grapes tend to flower earlier, and they are pruned earlier than the red wine vineyards.  Especially Cabernet Sauvignon, which we always want to delay to lessen the chance of eutypa (a “dead arm” disease that can occur when fresh wounds from pruning expose cordoned arms to too much moisture).  Things are on track, which bodes well for us in 2012.” 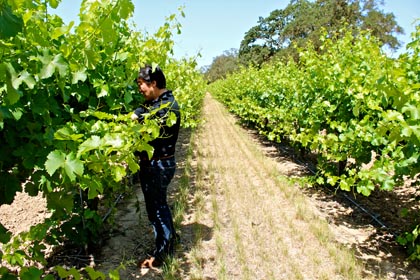 Lodi grown Cabernet Sauvignon, as in most places in California, is among the last grapes picked each year – usually mid-to-late October.  LangeTwins’ Sauvignon Blanc, on the other hand, is picked very early in the season – as soon as mid-August – not only because it ripens sooner, but also because Akiyoshi prefers to harvest at lower sugar levels – reading as little as 20.5° Brix, or 22° at the most – when the grapes’ acid levels are still crisp and zingy. 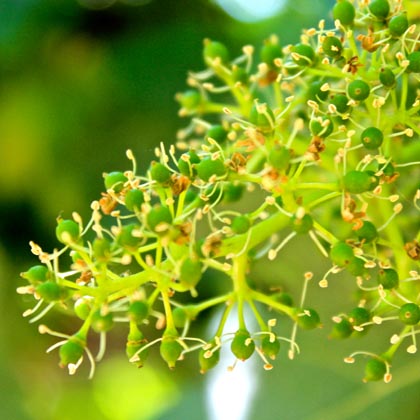 Naturally, there is some danger to picking Sauvignon Blanc at sugar levels that would be considered “unripe” for most other varieties:  Sauvignon Blanc’s well known tendency towards a varietal character associated with green or grassy, weedy or downright vegetal/bell peppery aromas and flavors – what vintners usually refer to as pyrazines (short for methoxypyrazines).  Who wants a white wine that tastes like cut grass, green vegetable juice or something unpronounceable?

The LangeTwins estate, however, has two things going their way preventing that from happening in their wine:

1.  The benign Mediterranean climate of Jahant/Lodi AVA, with its fertile yet well drained sandy loam soils, which allows Sauvignon Blanc grapes to ripen just long enough to pass gracefully through its “green” stage (contrary to what’s become less and less a “common knowledge,” Lodi does not get desert hot like the rest of Central Valley – its growing seasons are actually a shade milder than parts of mid-Napa Valley, Sonoma’s Dry Creek Valley, and most of Paso Robles).

Wherefore Sauvignon Musqué?  This is a variation of Sauvignon Blanc that was almost accidentally “discovered” by a grower in Monterey’s Arroyo Seco AVA in the late seventies, during budding trials of experimental grapes furnished by U.C. Davis.  The grower – Doug Meador, who also made wines under the Ventana label at the time – noticed one plant that bore grapes having a more flowery, lemon/lime and melony taste, without a hint of bell pepper, that had been mis-identified by U.C. Davis as “Savagnin Musqué.” 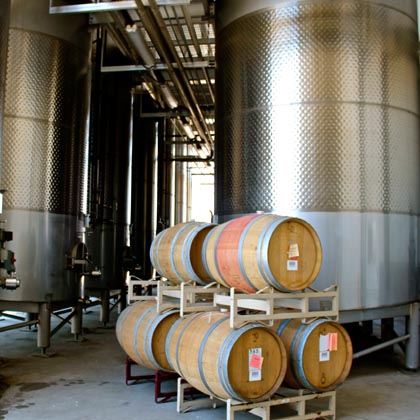 Suspecting that it was a variant of Sauvignon Blanc, Meador had the plant studied by Pierre Galet, a renowned French grape ampelographer (i.e. grape scientist), who confirmed Meador’s suspicions.  Since then, the Sauvignon Musqué has been distributed by nurseries, cultivated and made into some of the state’s most highly regarded Sauvignon Blancs, by prestige wineries such as Araujo, Merry Edwards, Selene and Spottswoode.

Says Akiyoshi – whose winemaking experience prior to LangeTwins (25 years as production manager of Woodbridge by Robert Mondavi) was strictly with traditional “green” strains of Sauvignon Blanc (still predominant in California vineyards) – tells us, “the Musqué definitely makes a difference, giving us the advantage of achieving phenological ripeness and sugar accumulation along parallel lines.  It allows us to grow the grapes under protective canopies (see photo of trellised overhanging shoot positions) to help hold acid levels.  Most importantly, it gives us wines with a good mix of melon and grapefruit flavors; and rather than pyrazines, just nice hints of fresh green pea in the taste.”

In the winery, Akiyoshi ferments and ages the LangeTwins estate grown Sauvignon Blanc entirely in temperature controlled stainless steel tanks that help retain a purity of the Musqué fruit, without distracting tastes of oak.  To round out the otherwise sharp taste of acidity, Akiyoshi and his team keep the wine in contact with dead yeast cells, called lees, stirring them up about once every other week – a practice the French call sur lie.

“Sur lie adds mouth-feel, while helping to hold and balance out the acid,” says Akiyoshi, while adding:  “not all winegrowers are created equal, and LangeTwins is among the best when it comes to viticultural techniques that ‘raise’ wine quality in the vineyard, rather than us having to somehow make it happen in the winery.  A great appellation (i.e. Lodi) gives us an extra advantage.” 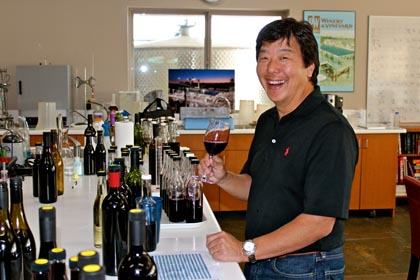 LangeTwins David Akiyoshi in his lab/office