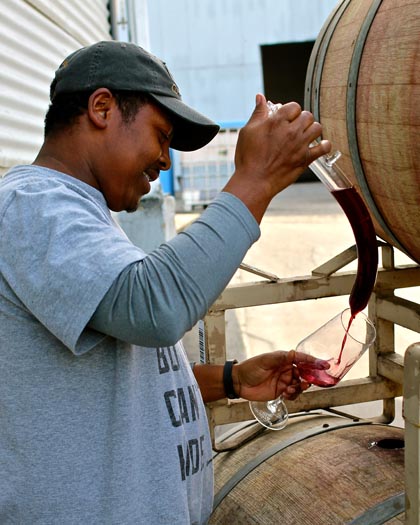 GRANDMA AND GRANDPA HAD IT RIGHT

Summer is three weeks away (June 21, 2014); but lately, it sure has felt like it has already arrived. 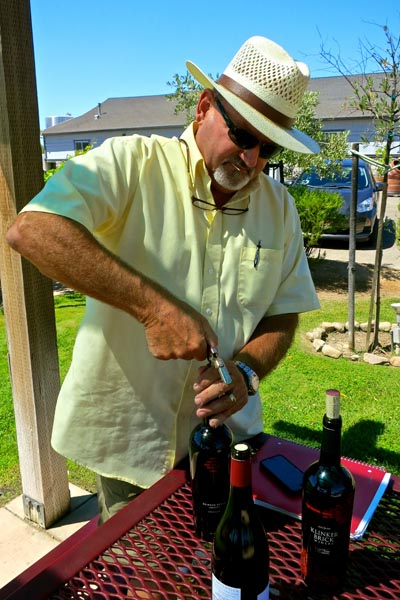 Time was, when the weather caught fire, wine lovers would suddenly reach for ice-chilled bottles of fizzy Portuguese rosés in cute little bottles that could be turned into cheesy lamps or vases. But that was grandma and grandpa. Their kids discovered the joys of "Riunite on ice," domestic Chenin Blanc, and later on, White Zinfandel or Chardonnays that were dryer than Chenin Blancs, but seemingly just as fruity.

What are today's younger adults thirsting for? More and more of them seem to be gravitating back to what grandma and grandpa drank: pink rosés. Only, today the rosés are pretty much bone dry, yet still light, fruit forward, and easy as, well, summertime.

Lodi's Klinker Brick Winery owner/grower Steve Felten learned this almost by happenstance. A red Zinfandel specialist (believe it or not, none of the premium wineries in Lodi produce a "White" Zinfandel), Klinker Brick first came out with a dry rosé three years ago, after opening their tasting room on Alpine Rd.

Explains Felten, "We produced a rosé because we don't grow white wine grapes (authentic rosé style wines are made from red wine grapes – their faint color derived from brief exposure to grape skins), and we wanted to offer something similar to a white wine in our tasting room."

Felten soon discovered something other Lodi wineries have recently been experiencing: rosés sell out in a matter of weeks. Says Felten, "Everyone is all over it as soon as the weather warms up. Now that they don't drink White Zinfandel, I guess dry rosé is it."

The 2013 Klinker Brick Lodi Rosé ($15) is indeed the ideal summer sipper: orangy pink, with a refreshing watermelon/honeydew fruit aroma hinting at pink grapefruit; its light-medium body zipped up by an edge of tart acidity, while finishing soft and round. 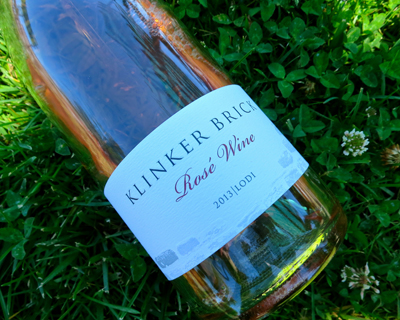 Smith's approach – following the Southern French model – makes sense because Americans have been falling hard for imported rosés over the past nine years. The 2014 Nielsen Report (cited in the Vins de Provence Web site) states that American consumption of Southern French dry rosés increased by 39% in 2013, following a 41% increase in 2012.

Felten tells us, "We knew that rosés were getting popular when we first got into it –now we know how popular." Subsequently, Klinker Brick has more than tripled its production to 1,000 cases. Adds Felten, "700 cases are going out to select markets, and the rest we'll sell in the tasting room." Klinker Brick, incidentally, now sells in 44 states, and will add three more states by the end of the year.

"It took us a couple of vintages to get it down," says Smith, "and the 2013 rosé is pretty much where we want it to be – about 12.8% alcohol, and .2% residual sugar (technically, well below the threshold of perception) adding a nice creaminess."

Explains Smith, "If you want to make rosé right – in a way that it's going to be appreciated – it has to be a very delicate wine, with lots of natural acidity. To get that, we pick the grapes very early, at 18° to 20° Brix (i.e. sugar readings), at least a month before we pick for red wines. Then we give it the gentle treatment – whole cluster pressing, and 100% cold temperature stainless steel fermentation." 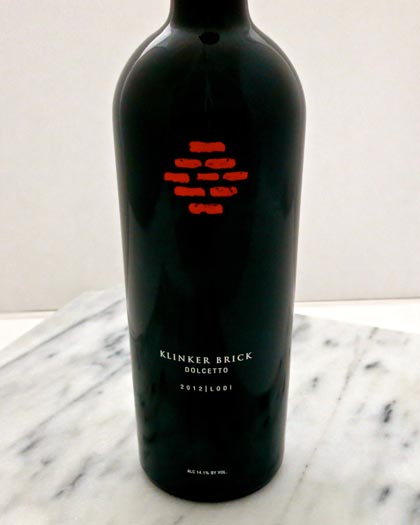 Klinker Brick Zinfandels, the winery's bread and butter, have always been calculated to express the jammy, wild berry side of the varietal – big, bold, yet round and palpable on the palate – with dependable consistency. The latest iteration – the 2012 Klinker Brick Lodi Old Vine Zinfandel ($19) – achieves exactly that.

Production is now up to 40,000 cases. What's changed over the most recent years is the fact that the Felten family is no longer a grower/supplier of Zinfandel: to meet market demand, they not only have to utilize every bit of their own fruit, but they now buy from seven other growers in the Lodi AVA.

But not everything Klinker Brick does falls into predictability. In the middle of an industry-wide retreat from the grape, for instance, the winery has been steadily increasing its production of Syrah over the past five years. Why? "Because it sells out within a couple of months each year," says Felten, "and it's been on strict allocation in all the markets… we haven't been able to produce enough."

8,000 cases of the 2012 Klinker Brick Farrah Syrah ($20) have just been released: a flowery scented dark red wine; smoothly polished, yet virile, meaty and toothsome on the palate – like a WWE wrestler in a designer suit.

Says Smith, "Our Syrah is not as earthy as French Syrahs, but it does have a little bit of that chocolate/bacon character. I think the key is elegance – 100% French oak (40% new) just adds to it – and balance… it's the Farrah's balance that everyone finds so appealing."

It is also a balance keyed by a site that has steadily come into its own: the Farrah Vineyard, planted 18 years ago in the super-sandy east-side Lodi soil along Locust Tree Rd. The vineyard started off on rather complex Smart-Dyson (i.e. a vertical split canopy) wiring, but quality increased following conversion to more standard VSP (Vertical Shoot Position). Felten tells us a-matter-of-factly, "It's one of those vineyards where we no longer have to do much – we don't shoot-thin, we don't pull leaves, we irrigate the hell out of it to keep the fruit from shriveling, and every year it gives us 4 to 6 tons of this incredible fruit. Why mess with it?" 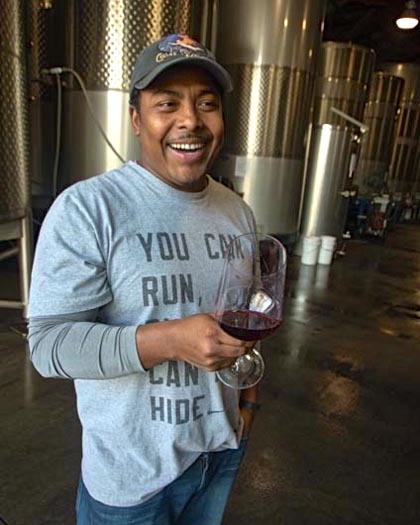 Finally, something that you won't find everywhere, but is raising eyebrows in the Klinker Brick tasting room as we speak: the 2012 Klinker Brick Lodi Dolcetto ($20) is not just a first for the winery, but also a purplish, teeth staining varietal red wine with its own panache – loaded with vivid, blackberry liqueur-ish fruit, thick, sturdy, ultra-dry, yet more medium bodied (as opposed to big and heavy) in the mouth.

Dolcetto, for the record, is an Italian grape associated mostly with the Piedmont region of Northern Italy. It is unusual, says Smith, because "its skin is thick and inky in color… it produces a dark red wine with a dry tannin that can be almost unbearable if you let it, yet is lighter and leaner in structure than most grapes."

To transform the Dolcetto into something that fits more easily into people's comfort zone, Smith admits to blending in a little Petite Sirah (5%) and Cabernet Sauvignon (5%) – "just to add structure and fill it out a little bit."

The Dolcetto grapes are sourced from a vineyard just outside the little town of Linden – the south-east corner of the Lodi AVA, where fruit and nut orchards far outnumber grape vines. Felten tells us, "We didn't set out to become a Dolcetto producer – the grapes came with 4 acres of Petite Sirah that we wanted to farm. It was planted by an old Italian family – just 3½ acres, owned by Antoinette Celle. It was her dad who originally brought the cuttings over from Italy in a suitcase."

Mr. Smith chimes in, "Sometimes the best things just happen to come along – like the 114-year old Carignan vineyard (owned by Jean Rauser, located right alongside Tegan Passalacqua's Kirschenmann Vineyard and Michael McCay's Lot 13) we are now farming, which is already adding a unique character to our rosé, and turning out to be a very interesting red wine that can stand on its own. If the Dolcetto does well, we'll keep doing it. 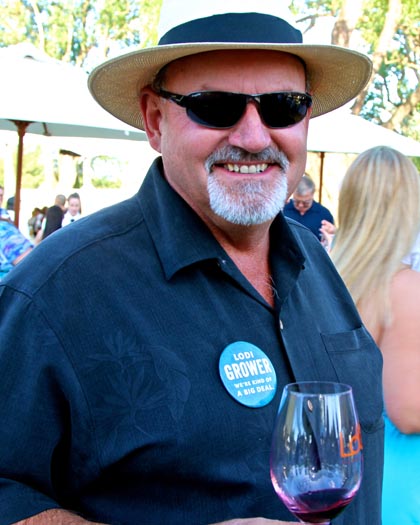