Hunters Oak’s red wines carving out their own niche 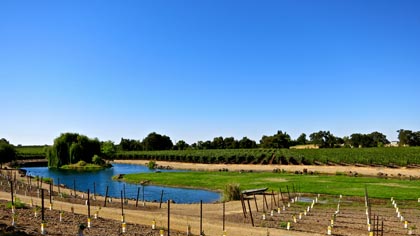 The cool thing about Estate Crush, located in Downtown Lodi, is that a number of small lot growers’ wines are produced (as well as sold) there.  Third generation Lodi farmer Ross Schmiedt has his Twisted Roots wines made at Estate Crush; so does Bob Lauchland, who has been having fun with his whimsical Crazy Legs and Jubilee labels.

One of Estate Crush’s first clients, when it started up in 2009, was Derek and Claudia Halecky, who have been bottling a few hundred cases a year under their Hunters Oak label – named after a giant oak tree (at least 300 years old) on their vineyard property, located east of the town of Lodi off Atkins Rd.

You can taste Hunters Oaks’ two current releases during Estate Crush’s tasting room hours (Fridays through Sundays, 12-5 PM); including a round, fleshy yet fine motor and muscle toned 2010 Hunters Oak Clements Hills-Lodi Grenache ($32), with its come-hither scents of fresh baked strawberry tarts.  There is also a suave, sturdy 2009 Hunters Oak Clements Hills-Lodi Tempranillo ($32) that is fairly low key in the nose; but sneaks up on you with a round, meaty, medium-full bodied feel in the mouth, finishing soft, with a toothsome dash of oak.  Besides Estate Crush, both wines are offered at the Lodi Wine & Visitor Center.

If anything, both Hunters Oaks wines also add to a growing body of work underlining the increasing significance of the Clements Hills AVA, one of the greater Lodi AVA’s seven officially recognized sub-appellations.

For such an old wine region, dating back to the late 1800s, there is still a lot that is new about Lodi; especially in Clements Hills, located east of the more historic Mokelumne River AVA.  Whereas Mokelumne River is a fairly flat Delta region consisting of deep sandy loams (home to most of Lodi’s 50 to over 100 year old Zinfandel plantings), Clements Hills is marked by more gravelly volcanic soils on rolling hills, situated on elevations rising up to 400 feet as they transition into the lower Sierra Foothills of neighboring Amador County. 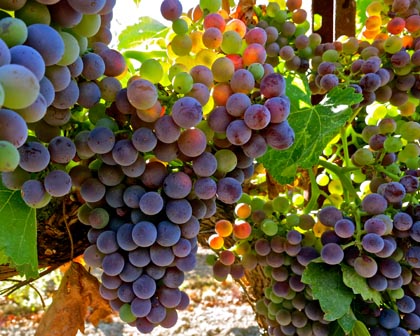 Although there are some scattered ancient vines (such as Turley’s Dogtown, dating back to 1944), most of the vineyards currently in existence in Clements Hills did not go into the ground until the late nineties or after 2000.  Therefore, only now are we starting to understand some of the AVA’s more significant wines, which come from vines that are just barely 10 years old.  Bokisch’s Terra Alta Vineyard Tempranillo, for instance, yields a bright, strawberry-fresh style of this grape; less earthy, yet no less meaty in structure, than many of the Tempranillo based reds of Spain (particularly, Rioja).

We are starting to see interesting Grenache (a.k.a. Garnacha) as well as Tempranillo reds coming from Gregg Lewis’ vineyard, located on a bluff off Collier and Hwy. 88, looking down upon the winding Mokelumne River.  The Napa based Odisea winery produces a Garnacha from this vineyard that is different from Bokisch’s Terra Alta Vineyard Garnacha in terms of slightly more peppery, anise and cardamom-like spice qualities.  Both Odisea’s and Lewis’ own Tempranillo (the latter, bottled under his Dancing Fox label) feel broader and fleshier in the mouth than Bokisch’s Tempranillo, while showing more Mediterranean-ish green and black olive notes in the nose. 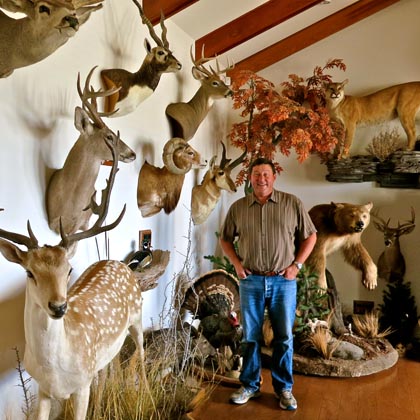 Markus Bokisch also farms the 13 planted acres of Hunters Oak Vineyard for the Haleckys; and since these vines did not go into the ground until 2006, it’s far too early to say exactly what kind of wines their Grenache and Tempranillo plantings will eventually produce.  We can, however, make some reasonable observations based upon

Noting the differences between the undulating volcanic-gravelly-clay hillsides marking his Terra Alta Vineyard, and the Haleckys’ vineyard barely a half-mile away, Markus Bokisch tells us:  “Hunters Oak is actually atypical of Clements Hills – composed entirely of alluvial soil, hidden within the folds of volcanic mud flows.”  The vineyard sits in a more gently sloping dell, close to Bear Creek – a site that also “collects cold spring air, and is subject to frost every year. “ 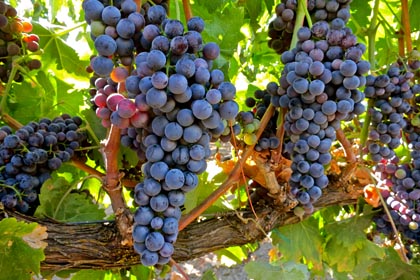 To avoid frost damage, Hunters Oak is pruned as late as possible each spring, which has as much impact on the way the grapes ripen as the promiscuity of the alluvium.  Says, Bokisch, “the late bud break leads to longer hang time, since it one of the last vineyards to be harvested in the region.  This longer hang time tends to accentuate softer, supple tannins, more rounded than angular.”

That roundness, along with bottom notes that seem to echo the site, are already typifying Tempranillos coming from Hunters Oak.  The red wines made from Grenache, says Bokisch, “develop strongly perfumed notes, yet shy away from that candied strawberry found in red clay soils” (such as that of Bokisch’s Terra Alta Garnacha).

So make no mistake:  as the vineyard matures, Hunters Oak is bound to carve out its own niche; especially since Derek Halecky is determined to grow for quality, not quantity.  “I ask Markus to do whatever it takes,” he says; which includes dropping fruit and pulling leaves three or more times during the course of each season, in order to restrict growth and encourage the photosynthesis that optimizes formation of flavor.  “The vineyard is small enough that we can micro-manage it to an nth degree,” says Halecky.

The Haleckys also like a good Bordeaux style red; and so earlier this year they added three-quarters of an acre of Cabernet Sauvignon (which should compliment the 4 acres of Petit Verdot, also planted in 2006), and there are plans to add half an acre of Syrah – “just to see what happens,” according to Mr. Halecky.

The meticulous care that is visibly evident everywhere in the vineyard, and the infectious energy and enthusiasm of the Haleckys themselves, also make it clear that Hunters Oak will be a vineyard, and wine brand, to watch over the next few years. 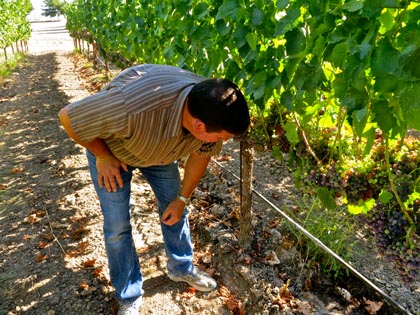 Derek Halecky examining his aggressively leafed Grenache, which will be thinned further before harvest in 2012