Having a Lodi Thanksgiving 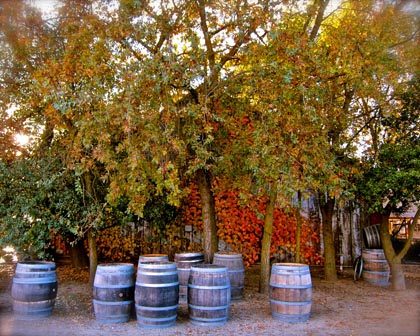 LET YOUR TURKEY BE YOUR THANKSGIVING WINE GUIDE

Is there anything more American than turkey for Thanksgiving, with all the extra delectable accoutrements?

The turkey is one of our greatest comfort foods. Has been, as we all learned in school, since the Pilgrims sat down with the local Native Americans for that historic big meal. Except of course, historians (such as Smithsonian.com) now tell us that if there was wild turkey at the first Thanksgiving, it most certainly wasn't the centerpiece. Neither did they have bread stuffing or pies, since they had no wheat flour or butter to make them. Plus, almost no women were among the 140 or so people (at the most, four women helped with the cooking): it was all men – including 90 Wampanoag Indians – hunting, gathering, and celebrating the religious refugees' first harvest party, which lasted three days.

Most likely, venison was the centerpiece at the first Thanksgiving meals; and probably duck, geese, passenger pigeons (skies were still thick with these extinct birds in 1621), eels, lobster, clams, mussels, and something called sobaheg (a traditional Wampanoag stew of corn, roots, beans, squash, and assorted meats). And with the dearth of ovens, everything was either boiled or spit-roasted. 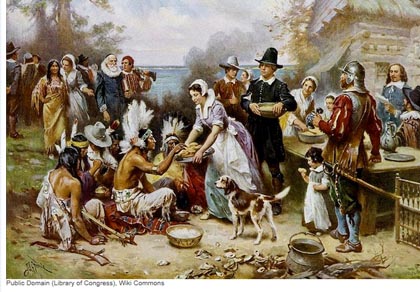 Nonetheless, Thanksgiving is Thanksgiving, and we all love it; whether we're enjoying it with our roasted turkey, Dungeness crab, baked ham, or even venison, lamb, beef, duck, Turducken or Tofurky®. It's a celebration, for Pete's sake, and when we celebrate Thanksgiving the most appropriate beverage, even for tofu lovers, is invariably wine. We can drink beer, sodas or iced teas any other day of the year: for Thanksgiving, nothing less than the fruit of the vine would or should do.

WINES FOR COQ D'INDE AND OTHER LOUISIANA STYLE TURKEYS

Turkey is a fine-feathered native of the good ol' U.S.; although, as Paul Prudhomme tells us in The Prudhomme Family Cookbook, the Cajuns have always called it by its French name: coq d'Inde, or "cock of India." The Cajuns also like to deep-fry their coq d'Inde (re this deep fried turkey recipe) in 12-gallon sized industrial drums with either lard (the original choice) or peanut oil (recommended today); preferably with Cajun spices or hot sauce marinades or injections. The result is a turkey that is crisp on the outside, juicy on the inside, and hopefully, not a little spicy and tingly in the mouth. 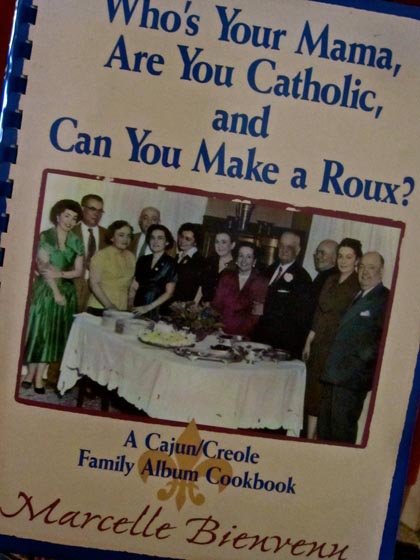 Have you also heard of Marcelle Bienvenu, whose classic Who's Your Mama, Are You Catholic, and Can You Make a Roux? is a paen to the Cajun-Creole culinary traditions of New Orleans? Bienvenu tells us that family members would refuse to show up for mandatory Thanksgiving gatherings unless there was turkey stuffed with oyster dressing, made with rice or bread crumbs (re one of Bienvenu’s mother’s oyster dressing recipes), complete with chicken livers and gizzards, and chili flakes sprinkled over the skin.

Justin Wilson, that old-time Cajun television cook, liked to recommend his "turkey in a bag": salt, pepper and cayenne pepper sprinkled on a greased, dressed turkey; shaking the turkey up in a Reynolds® cooking bag with a tablespoon (or two) of flour; punching holes at the top of the bag, and roasting at 325° F. until the skin is nicely brown and crinkly.

However which way you enjoy your turkey à la Louisiane, it is the hot spice inflections that naturally call for light, crisp white wines that are refreshingly fruity in the aroma, but dry on the palate.

Lodi, in fact, has come to specialize in precisely that type of white wine. For example, there may be nothing unusual about the Sauvignon Blanc grape; yet the LangeTwins Family Lodi Sauvignon Blanc ($15) is positively bursting with pristinely fresh, flowery, lemony and airy qualities, rather than the heavy, weedy or green herbaceous flavors so typical of the grape when grown in places like New Zealand. In a similar vein, Six Hands bottles a Cresci Vineyard Lodi Chenin Blanc ($16) that offers irrefutable proof that white wines as lemony crisp, delicate and pure (needing zero acidification) as white wines from anywhere in the world can be grown right here in Lodi. 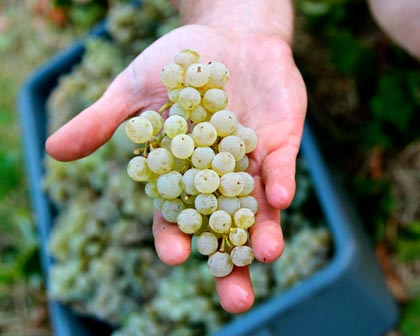 Lodi has also emerged as one of California's leaders in the production of crisply dry white wines made from less familiar, alternative grapes. A perfect example is the flowery and minerally scented Uvaggio Lodi Vermentino ($14), which winemaker/owner Jim Moore has described as a "thinking man's Pinot Grigio" – perfect if you're thinking about deep fried and spiced up turkey.

If you harbor a taste for something new and different, Borra Vineyards' Artist Series Lodi White ($22) is an amazingly sleek, dry, minerally textured white wine made from Kerner and Bacchus grapes – unusual German white wine crosses, practically unheard of in the rest of the U.S. – without one iota of manipulation in the vineyard or winery. In the same vein, look for Borra's nuvola Lodi White ($22) – a bone dry, exotically perfumed Gewürztraminer, and as nice a match with Cajun spiced turkey as any.

Barring that, you cannot go wrong with any of the dry whites produced by Lodi's Bokisch Vineyards. For going on 15 vintages, owner/growers Markus and Liz Bokisch have been leading the entire American wine industry with perhaps the purest, freshest varietal bottlings of Albariño ($18) made; plus, a more citrusy but richly textured Verdelho ($18), a spring scented Garnacha Blanca ($18), and a sprightly, tangerine-like Verdejo ($18).

Among our best and latest producers, Acquiesce has been forging a reputation for its its "naked" style of white wines – fermented in stainless steel tanks and seeing absolutely zero oak barrels – such as their wonderfully lithe and lissome Lodi Grenache Blanc ($23) and exquisitely balanced, svelte Lodi Belle Blanc ($24).

While located an hour's drive away from Lodi in Lincoln, a visit to the Wise Villa winery is worth the drive for a sip of their alluringly silken and perfumed Lodi Torrontés ($29), which took the sweepstakes award for being the best white wine, period, at the most recent California State Fair Commercial Wine Competition. 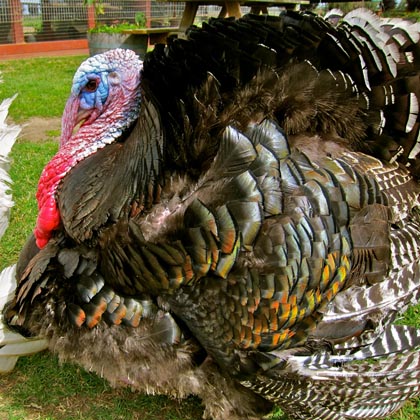 What are the best wine choices for roasted turkeys that are stuffed with bread (or croutons), sage and other pungent herbs? After all these years, we have to say that the most effortless match for these traditional styles of turkey is still the most traditional style of white wine: Chardonnay.

Are you tired of Chardonnay? Get over it. There's something about bread stuffings mixed with sage – or enriched even further by chopped mushrooms, caramelized onions and other vegetaables – that connects directly with the fleshy, creamy textured, apple or even pineapple nuanced qualities of a classic Chardonnay. Herb stuffed turkey and Chardonnay is like an eHarmony of holiday matches.

Lodi grown Chardonnays, in fact, might be the perfect Chardonnays for wine lovers who have grown a little tired of the varietal: because the region's mild Mediterranean climate tends to produce slightly lighter, more nimble styles of the grape. Exhibit A: the Harney Lane Lodi Chardonnay ($24), which deftly weaves crisp, medium bodied qualities with just smidgens of creamy oak-influenced aromas and flavors; ending up tasting fluid and refreshing, as opposed to the heavy, plodding taste more typical of coastal California Chardonnays. 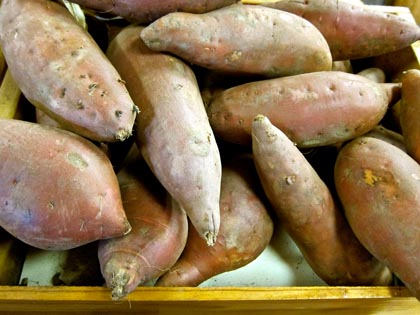 Michael David Winery used to call their Chardonnay 7 Heavenly Chards, but they have recently dispensed with that proprietary name. They now call it, simply, Michael David Lodi Chardonnay ($16) – signifying that they are getting serious about the grape. Indeed, current renderings are bone dry and adroitly crafted: a near-perfect balancing act of stainless steel tank and barrel fermentation, radiating citrusy crisp varietal qualities with subtle permutations of tropical fruit; with discreet slivers of creamy, vanillin oak notes, smoothing over the palate.

In similar fashion, Watts Family produces an Upstream Lodi Chardonnay ($18) that underplays the buttery/creaminess of oak in favor of nuanced notes of citrus, violet, and lavender, stretched across the palate with crisp, medium bodied, mineral sensations: a rather unCalifornian style of Chardonnay – because, of course, it comes from Lodi. Needless to say, a perfect foil for the mild, white meat taste of turkey.

But if you plan on going further by smoking your herbed bread stuffed turkey in, say, an outdoor smoker or Big Green Egg, there really is no better match than a classic barrel fermented style of Chardonnay, showing more pungent, viscous, toasty French oak qualities. Lodi produces that style, too: we suggest either the fleshy, full bodied Mettler Family Lodi Chardonnay ($25); or the meticulously crafted, finely textured Lucas Estate Lodi Chardonnay ($35). 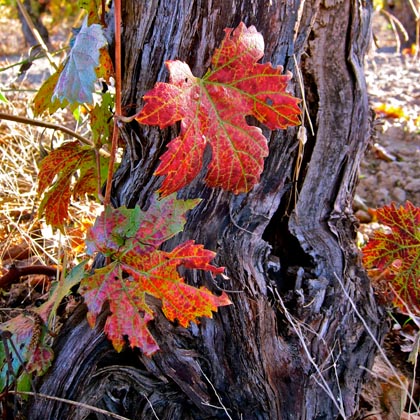 Then there are the myriad ways of roasting turkeys with more aggressive, super-rich stuffings, such as

These rich settings are where red wines become the higher percentage matches, although we say this with the eternal caveat: turkey can be a dry bird, and so any red wine choice probably needs to be lighter in (potentially) palate drying tannin. This means that you're better off with smoother, softer tannin, fruit-forward red wines – in which, as it were, Lodi also happens to excel.

Primitivo is a clonal variant of Zinfandel that both growers and winemakers favor because of its consistency of berry size, producing red wines bursting with fruit qualities falling in the "red berry" spectrum (raspberry, cherry, strawberry, cranberry, etc.) of the Zinfandel character. The Harney Lane Lodi Zinfandel ($22), in fact, is actually made from at least 50% Primitivo, which explains its buoyant consistency of red berry fruitiness. 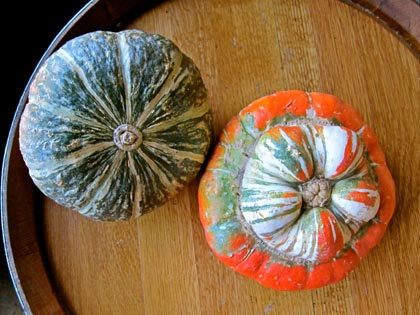 Still, when it comes to round, fruit-forward styles of red wine ideal for richly stuffed turkeys, it's not all about Zinfandel. Winemaker/grower Michael McCay, for one, truly believes that the Grenache grape may be Lodi's answer to Pinot Noir. The McCay Lodi Grenache ($28) exemplifies those qualities: soft, lush yet sturdy cherry pie fruit qualities, spiced up by aromatic pepper and scrubby (thyme or rosemary sticks) complexities. Just as compelling is the Bokisch Terra Alta Vineyard Clements Hills-Lodi Garnacha ($20), which exudes bushels of white pepper spiced strawberryish fruit.

Perhaps the ultimate Lodi grown red wine for richly stuffed turkeys? Any of the bottlings sourced from the historic Bechthold Vineyard, planted 128 years ago to Cinsaut – a grape one winemaker (Onesta's Jillian Johnson) loves to describe as liquid "spiced strawberry-rhubarb pie." Bechthold grown Cinsauts, in fact, tend to be exceedingly refined, silky/feminine, and almost magically scented with these baking pie perfumes. Hence, your Thanksgiving could not possibly go wrong with any red wine sourced from this phenomenally fabled planting; such as the Bechthold Vineyard Cinsauts produced by Onesta ($29), Turley ($18), Michael David ($25), or Estate Crush ($26).

Have a wonderful Lodi Thanksgiving! 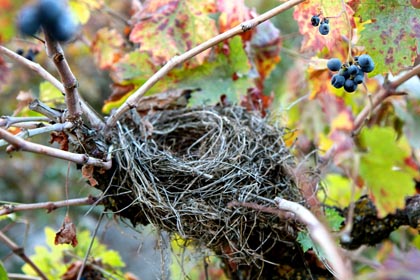