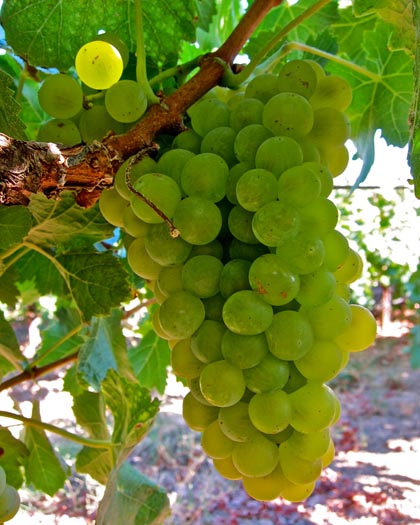 An heirloom vine grows in Lodi

What is it with winemakers and their “odd” varieties and blends?  Well, as Robert Mondavi always used to say, winemaking is as much an art as it is a science; and if there’s even a speck of truth to that statement, we have to expect something coming out of left field from some of our more artistic winemakers every once in a while.

Sometimes they produce a wine that is as outlandishly good as it is unusual, and it ends up getting picked out of over a thousand other white wines for an honor like “Best of Show White” in a big-time event like the California State Fair; which is the story of the 2011 Kenneth Volk Silvaspoons Vineyards Alta Mesa Torrontés ($24), grown right here in Lodi by Ron Silva. 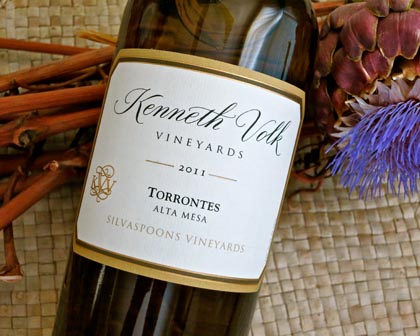 This week we got our chance to experience Mr. Volk’s and Mr. Silva’s Torrontés for ourselves, and we could see why the State Fair judges were so taken by this wine, made from a grape that is extremely rare in California, despite its popularity in wine regions like Argentina:  their Torrontés is a glimmering, pale straw white wine with the teensiest touch of spritz, and an effusively fresh, clean fragrance of pulpy white peach and tropical white flowers (faintly of jasmine).  On the palate, the wine is mouth-wateringly crisp, with a real sense of lightness to its medium-full body; redolent of summer stone fruits and natural acidity, finishing with a wet, lip smacking, tangerine-like juiciness.

Mr. Volk describes his Torrontés as an “underappreciated heirloom varietal,” like some of the other unusual grapes he makes wine from (including Malvasia, Mourvèdre, Negrette and Trousseau).  He admits that these varietal wines “are considered ‘hand sell’ marketing burdens in most channels… mass consolidation of wine distributors and retailers has made these wines at best a novelty niche market.”  But he reminds us that even better known grapes, like Viognier and Syrah, “took a long time to become part of the mass market consciousness.”

So why bother?  Say Volk, “our answer is that they can produce some delicious wines with different flavor profiles from the usual mass-marketed chocolate, vanilla and strawberry standards.”  Furthermore, it’s a matter of taking a stand, because “many of  these varieties could face extinction if the market forces stay on the current path.”  Thanks goodness for enological artists like Ken Volk! 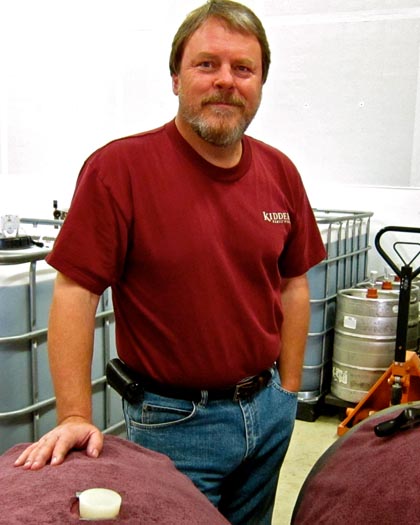 The Kidder Family’s artful blends rake in the gold

Mr. Volk, who once owned Wild Horse Winery (sold in 2003), has been making his eponymous Kenneth Volk Vineyards wines at the former Byron winery in Santa Barbara these past eight years.  Closer to home, one of Lodi’s most promising new wineries — Kidder Family Winery (est. 2011), owned by grower/winemakers Aaron and Linda Hauck Kidder — pulled off something of a hat trick at this year’s California State Fair:  they entered three wines, and they won three gold medals.  Not bad for first-timers!  Mr. Kidder’s eloquent response, upon first hearing the news:  “how cool is that?”

In fact, it’s an enormous achievement, since gold medals aren’t given out lightly in big competitions like this.  Last week we dropped by the Kidders’ tasting room on the east side of Lodi, and tasted their recently released, medal studded trio of 2010s:

2010 Kidder Family, Lodi Duet ($22) – A blend of Graciano (57%) and Tempranillo (43%), grown by the Kidders on their winery estate, along Hillside Dr. off Brandt Rd.  A brilliant purplish red wine with an earthy, cherryish nose, sweetened by oak and smidgens of balsamic-like syrup.  On the palate, you get the Kidder signature:  zesty, snappy acidity juxtaposed to truly fine, silky texturing, with a moderately weighted body (i.e. alcohol) and judiciously rounded tannin.  In other words, great food affinity — think braised meats and caramelized root vegetables, or else chocolate moles perked up with fruit or pungent nut shavings. 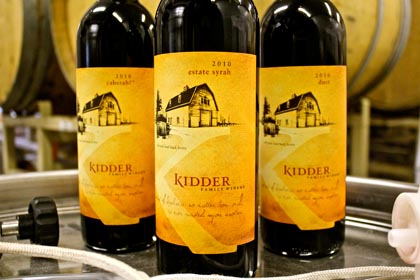 2010 Kidder Family, Lodi Caberah! ($24) – Another imaginative blend – Cabernet Sauvignon (60%) with Kidder estate grown Syrah (37%) and Petite Sirah (3%) — showing off the Kidder touch:  defying almost anyone’s expectation, a beautifully balanced red wine that is zesty edged, fluid and fleshy, but just medium-full in body — not heavy or ponderous, like so many Cabernet Sauvignons, Syrahs and Petite Sirahs.  The aromatic profile strikes a ringing chord — lush with red and blue berry qualities, with cedary nuances adding character like lines on a face.  We would also suggest:  possibly one of the few cabernet based reds that could taste just as good on a table of Chinese take-out containers as it would a platter of peppercorn and rock salt crusted roast beef.  Heck, just some Lockeford sausages on a bun (think whole grain mustard, thousand island and sweet/spicy relish) would make a fine Caberah! match.

2010 Kidder Family, Lodi Syrah ($26) – As unfashionable as it may be, Syrah is really what the Kidders grow and produce best — along with Klinker Brick’s Farrah, the best Syrah coming out of Lodi today (and seeing that the 2010 Farrah won both a double gold and “Best Syrah” at the 2012 State Fair, that’s saying a lot).  From 2010′s moderately cool, longer growing season, the Kidders fashioned a more buoyant, balanced style of Syrah — meaty, round, but also bright, almost sprightly in feel and texture — with aromas and flavors imbued with dark plum and violet perfume.  We immediately think of Chinese style duck or pork char siu bao (dumplings) — you want the wine’s plummy, wafting perfume to bathe over the exotically spiced meats — or else beef or lamb roasted with juniper, if not stewed with bay laurel, thyme or star anise.

Oh, those winemakers and their delicious oddball grapes and blends! 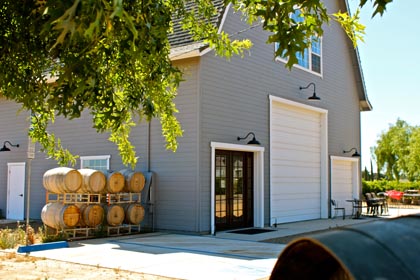