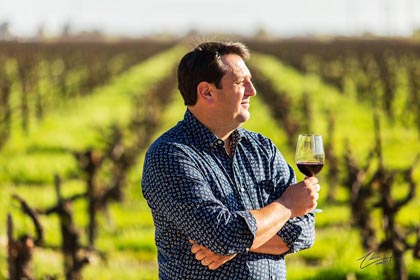 How does a French winemaker named Franck Lambert, with his India-born wife Rekha, celebrate Thanksgiving here in Lodi?

Monsieur Lambert was born in Southern France and educated at University of Montpellier (where he attained a Master's degree in winemaking). He has been a quiet but influential part of the Lodi winemaking community over the past 12 years.

After working in France's Alsace, Bordeaux and Languedoc regions, as well as a short time in South Africa, Lambert arrived in California’s Delta region in 2002 to be part of Michael David Winery's rapid (or rather, explosive) expansion. As Michael David's Senior Winemaker, Lambert was an integral part of the team perfecting wines like 7 Deadly Zins and Earthquake, taking the winery from just 10,000 cases in 2002 to over 350,000 cases by 2010.

Over the past four years Lambert has branched out as an independent consultant; lending his prodigious talents to Oak Farm Vineyards during their formative years, and most recently to Watts Family Winery and Stama Winery – the latter, nearing completion of the first phase of its new winery and visitor facilities (projected finish: next January 2015) on Davis Rd., just south of Turner Rd.

Having made Lodi their home, the Lamberts celebrate Thanksgiving with as much joy as any American. But of course, he tells us, "Thanksgiving is still a new custom for us, and so we celebrate it with a little bit of French heritage… 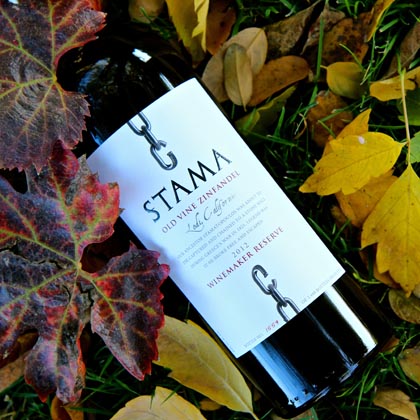 "We usually get up early and run or exercise our bicycle in the morning – enough to prepare ourselves for the big and nurturing day ahead. We often prepare a leg of lamb for Thanksgiving, just as we do for big celebrations in Provence, in the south of France. We also enjoy the lamb with a side dish of cauliflower gratin; and for dessert, my wife is an expert at preparing her classic flourless chocolate cake, which we have with vanilla ice cream." (Please see the Lamberts' recipe for lamb and cauliflower à la Provençale below).

Insofar as wine: Monsieur Lambert is French, and he is a winemaker – so he has lots to say about the wines they plan to enjoy this Thanksgiving. One of them will be the 2012 Stama Winemaker Reserve Lodi Zinfandel ($30): a full bodied rendering that is also redolent with the classic, red berry-perfume of Lodi grown Zinfandel, with a lush, almost plumcot-like, fleshy fruit tone; coming across as sturdy yet with a round, fine grained texture on the palate.

Says Lambert, "The 2012 Winemaker Reserve Zinfandel was produced and bottled in partnership with the Kapiniaris family, who own Stama Winery. I bought the fruit from the Mohr-Fry family's home ranch – very old, gnarly headed vines – and aged it for 10 months in French oak barrels before bottling it under the Stama label."

But having been born and raised just 20 miles east of the famous French wine region known as Châteauneuf du Pape, Lambert tells us, "We always have a bottle of Châteauneuf on the major holidays, and this year will be no different." For Thanksgiving this year, Lambert plans to enjoy a 2010 Châteauneuf du Pape produced by Grandes Serres.

Lambert is proud of his French heritage, and the standards upheld by strict laws that govern how grapes can be grown, as well as how wine made be made. He says, "There are 13 grape varietals allowed in Châteauneuf du Pape. I always loved driving along the roads of Orange and Courthézon and seeing the gnarly head trained vines – according rules decreed by the Appellation (i.e. AOC laws), all vines must be head pruned, except for Syrah which can be done on wire because it was introduced to the region later. Grapes must be harvested manually. The maximum average yield allowed is also very small – equal to about 2.7 tons per acre, by American standards.

With Rekha's flourless chocolate cake, Lambert plans to enjoy a bottle of Crémant de Limoux produced by Toques et Clocher: a gentle, fragrant style of sparkling wine, grown and produced in the Languedoc region, located in the south-east corner of France. Most Americans are unfamiliar with this wine, but Lambert reminds us: "Limoux is the birthplace of sparkling wine. It was in 1531, one century before Dom Pérignon, that wines from Limoux stepped onto the world stage thanks to Benedictine nuns from the St Hilaire Abbey, in a neighbouring village, who created the first sparkling wine in the world, called La Blanquette de Limoux."

The grapes permitted to produce Crémant de Limoux are Chardonnay, Chenin Blanc, Mauzac Blanc and Pinot Noir. Adds Lambert, "The name Crémant means the rules of production of this type of sparkling wine are very strict, similar to rules used to make Champagne."

When sharing his recipes, Lambert made note of the fact that the regional style of serving leg of lamb on a bed of vegetables dates back to at least 1897. A good number of Lodi families still cultivate grape vines as old, or older, than that: no wonder the Lamberts have felt perfectly at home here in Lodi, where “time honored” still means something! 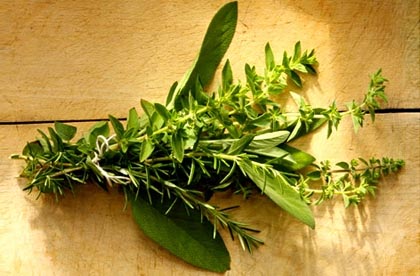 Leg of lamb: Prepare the leg by stuffing the garlic at equal intervals throughout the leg of lamb before searing it in a deep pan or Dutch oven. Pour olive oil into pan, and when it starts to get hot add the lamb leg and sear, browning both sides.

Slice onions and carrots; sear and add to the lamb leg. Add half-bottle of Chardonnay and half-quart water. Then add salt, pepper and the three garlic cloves that were set aside. Just before covering, add bouquet garni and let it simmer; covered until internal temperature reaches 140 F.

Preheat the oven to 375 F. Cook the cauliflower florets in a large pot of boiling salted water for 5 to 6 minutes until tender but still firm.

Meanwhile, melt 2 tablespoons of the butter in a medium saucepan over low heat. Add the flour, stirring constantly with a wooden spoon for 2 minutes. Pour the hot milk into the butter-flour mixture and stir until it comes to a boil. Boil, whisking constantly, for 1 minute, or until thickened. Off the heat, add 1 teaspoon of salt, the pepper, nutmeg, ½ cup of the Gruyere, and Parmesan.

Pour a third of the sauce on the bottom of an 8 x 11 x 2-inch baking dish. Place the drained cauliflower on top and then spread the rest of the sauce evenly on top. Combine the bread crumbs with the remaining ¼ cup of Gruyere and sprinkle on top. Melt the remaining 2 tablespoons of butter and drizzle over the gratin. Sprinkle with salt and pepper. Bake for 25 to 30 minutes, until the top is browned. Serve hot or at room temperature. 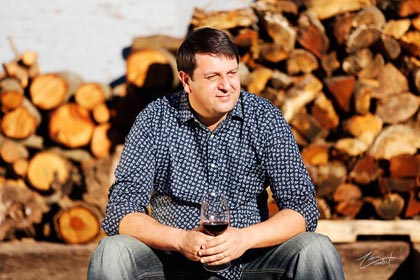