The supplanting of Plains Miwoks' sustainable life by European, Mexican and American cultures 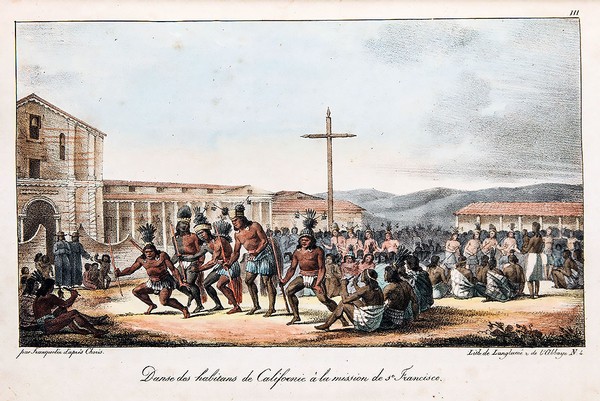 Continued from A full telling of the Plains Miwok, the "first people of the Mokelumne"

The Indian population is declining. They live well free but as soon as we reduce them to a Christian and community life they decline in health, they fatten, sicken and die. — Mariano Payeras Borrás (1769-1823, and early 1800s Father-President of California mission chain)

Mexico gained its independence from Spain in April 1822. On July 4, 1848, Mexico ceded the territories known as Alta California and Santa Fe de Nuevo México (i.e., roughly, California and New Mexico) to the United States in the Treaty of Guadalupe Hidalgo, which also ended the two-year Mexican-American War. 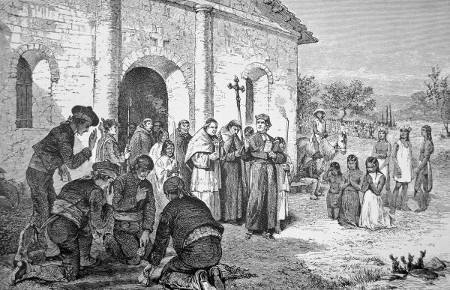 Hastened by the fierce debates over slavery going on in the U.S. Congress at the time, California was ratified as the 31st (and a nonslavery) state on September 9, 1850.

But the shout heard around the world happened a little earlier on January 24, 1848, when gold was discovered at Sutter's Mill in Coloma, in the higher foothills of Sierra Nevada, in present-day El Dorado County.

The first permanent settlement of a single, non-native family in the Mokelumne River area now known as Lodi probably took place in 1846. But the population dramatically swelled during the months immediately following the discovery of gold. In 1848, there were reportedly 7,000 people of Mexican or Spanish descent in all of California, plus 700 Americans and 200 Europeans. By the end of 1849 there were more than 100,000 people, the newcomers pouring in from across the country and around the world. By 1852, the official count was 224,435. 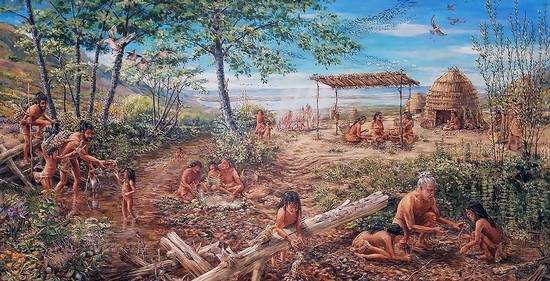 Many of the fortune seekers disembarking in San Francisco never made it to the mining camps in the Sierra Nevada. Instead, they settled on the coast or the areas between the Delta and the foothills, beckoned by, as Christi Kennedy wrote in Lodi, A Vintage Valley Town, "the rich land along the lush banks of the Mokelumne River." Kennedy writes that in 1849 Roswell Sargent, one of the Mokelumne's earliest settlers, "saw that the only sign of habitation by a white man was an abandoned log cabin apparently built by fur trappers," and so they set down roots in this "wilderness land still dominated by oak trees, grizzly bears, and elk, just west of present-day Lodi."

What was missing, however, was any sign of the region's original habitants, the tribal families identified as speakers of the Plains Miwok language. Their story, as you might surmise, was not a pleasant one. By the time gold was discovered in Mother Lodi Country, native occupants of the Mokelumne River area had been decimated by a succession of disastrous encounters — Spanish military, Franciscan missionaries, Mexican ranchers, and diseases. 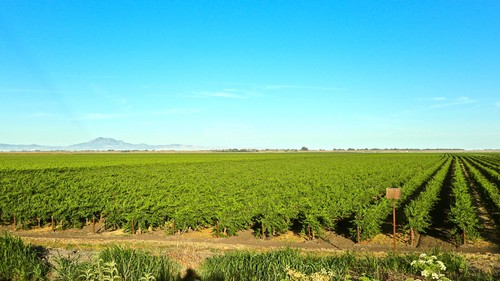 Mount Diablo overlooking the Ripken family's Guard Road ranch at the western edge of the Lodi AVA, in the Sacramento-San Joaquin River Delta area that was once the home of the Plains MIwok.

In his recently published (2016) book An American Genocide: The United States and the California Indian Catastrophe, Benjamin Madley, an associate professor at University of California Los Angeles, describes the federal and state sanctioned pressures put on native California tribes between 1846 and 1873:

The primary reasons for driving out the few remaining Plains Miwok from the Mokelumne River area was, as usual, money and land. Native people did not fit into the economic plans of the newly minted 31st state. 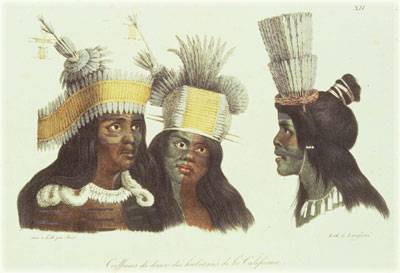 In her 1994 book on Lodi, A Vintage Valley Town. Kennedy picks up the story in the late 1700s, while making note of the verdant natural environment predisposed to successful farming, including the conditions that would eventually turn Lodi into the largest winegrowing region in America...

The first white men to gaze upon the lands of the Miwok were believed to be Spanish explorers in 1772. Traveling from Monterey, Captain Pedro Fages and Father Juan Crespí traversed the coastal mountains in the area of Mount Diablo and saw the great valley before them. They went as far as the present site of Antioch on that expedition.

Map of trails taken by Lt. Gabriel Moraga during the early 1800s, exploring much of the Central Valley, including the Sacramento, Cosumnes, Mokelumne and San Joaquin river areas. California Explorers Fact Cards.

In 1806 Gabriel Moraga left the Mission San José to explore the interior lands. Although it is not known if his expedition came close to the Lodi area, his journey is note-worthy because he gave the name of San Joaquin to the mighty river south of the Mokelumne. The name comes fromn St. Joachim, the father of the Virgin Mary, and it signifies "preparation of the Lord." In later years, the county was named San Joaquin.

Father Narcisco Durán was the next explorer of note. Traveling through the delta by boat with Lieutenant Luis Argüello in the spring of 1817, Durán encountered the Indians of the general Lodi area. He wrote in his journal:

"We had traveled but a short distance when we found waiting for us 113 natives, part Yatchicomnes and part Muquelemnes, half of them painted and armed, with an aspect of war. We overtook them, and, after we had spoken to them, they put aside their arms and asked for peace... They reach to the slope of the Sierra Nevada, and inform us that that which appears white is rock and not snow... At six o'clock we took leave of them, giving them wheat, etc., and they promised us that they would come on a trip to the mission." 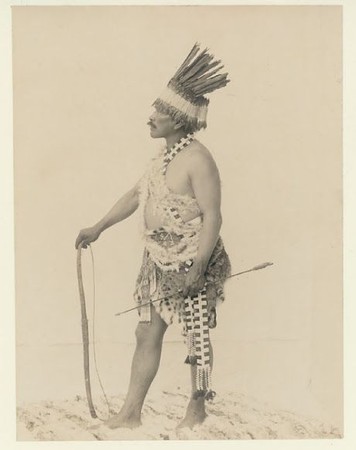 Durán is credited with making the first recorded use of "los Muquelemnes" in naming the natives. The term, which had many inventive spellings over the years, was applied to the Indians of the Lodi area because the Miwok village of Mukkel. In the Miwok language, "umni" means people, hence the word "Mukelumni" meant "the people of Mukkel." The name, Rio Mokellemos, was applied to the river by the Wilkes party in 1841 (Gudde, 1960). Today's spelling of Mokelumne was presented by the explorer John C. Frémont in 1844.

After Durán's first exploration, there were frequent treks into the valley by Spanish military officers and missionaries searching for Indians to convert to Christianity. When food was scarce in the valley, the hungry Miwok were known to travel west to the missions along the coast where they knew food would be given to them. Later the Miwok would escape the grasp of the Spanish missionaries by hiding in the tule swamps. As Richard Levy reported, "The Plains Miwok were by no means willing converts" (Kroeber 1952). However, from 1811 to the end of the mission period in 1834, mission records show more than 2,100 Plains Miwok were baptized.

Photograph of Miwok family from around 1880.

In 1827, five years after California changed from Spanish to Mexican rule, trapper Jedediah Strong Smith became the first American to travel overland to California. Smith and his trapping party explored parts of the Central Valley. Moving north to Washington and Fort Vancouver, outpost of the Hudson Bay Company, Smith told stories of the valley's abundant beaver population and lured more trappers to the region. Trappers occupied the valley until the mid-1840s when Mexican rule began to crumble and a few settlers built tule huts and log cabins.

The Miwok population suffered as the white man drifted closer. In 1832-33, an unidentified devastating illness swept the valley and many natives died. American trapper J.J. Warner wrote in the summer of 1833 that the valley was depopulated. He found many bodies but only six or eight live Indians from the headwaters of the Sacramento River to the San Joaquin River. 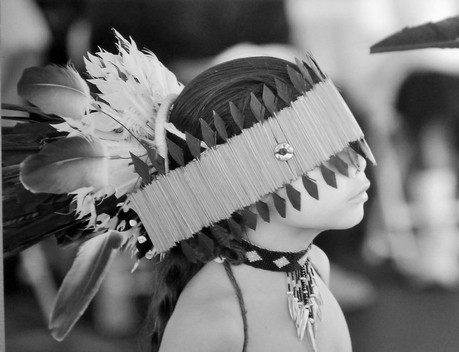 While some observers described the Miwok as largely peaceful, it is apparent the Miwok did fight other Indian groups and the white man on occasion. The white man laid claim to the land and distrubed the Miwok people's hunting and culture. The number of Miwok dwindled. Some of those remaining worked inlater years at the growing number of ranches. Mostly, the scattered Miwok retreated to the foothills where the land was less desirable to settlers.

While the valley was still the domain of the Indians in the early 1840s, people across the continent began to learn about the rich promise of the land called California from pioneer accounts, letters, and journals of early explorers. 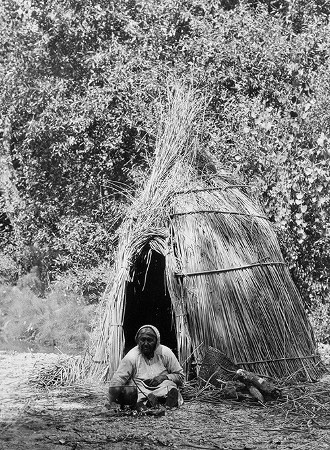 Early 1900s photo of Miwok shelter made from indigenous tule.

In 1844, Frémont made his first California expedition and traveled south through the San Joaquin Valley. On March 25, he reined in the iron gray stallion named Sacramento given to him by Capt. John Sutter of Sutter's Fort [site of present-day Sacramento] and stopped at the Mokelumne River just west of the present-day Lockeford. Waves of native grasses, golden poppies, and blue lupines trimmed with mighty oak trees entranced Frémont's poetic nature as he traveled through the fertile valley. As he wrote in his journal:

"One might travel the whole world over, without finding a valley more fresh and verdant — more floral and sylvan — more alive with birds and animals — more bouteously watered — than we had left in the San Joaquin." 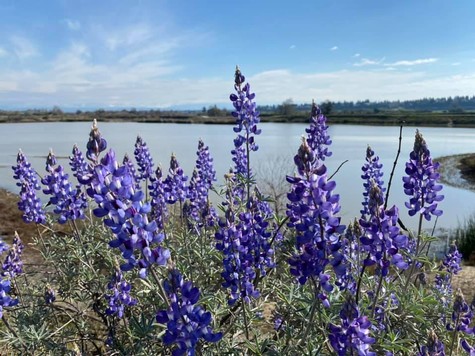 Richard Henry Dana wrote in 1840 of California's "good harbors... fine forests in the north; the waters filled with fish, and the plains covered with thousands of head of cattle..." Dana even went on to boast that the land was "free from all manner of disease." And rancher John Marsh, one of the first American settlers in California, wrote numerous letters urging settlers to come to his ranch at the eastern base of Mount Diablo.

A young man named Charles Weber read those letters. He joined the famous Bidwell-Bartleson party in 1841 to be among the first settlers to make the overland trek. In the late 1840s, Weber founded Tuleberg, later called Stockton, about 14 miles south of present-day Lodi, and was instrumental in attracting settlement to San Joaquin County. 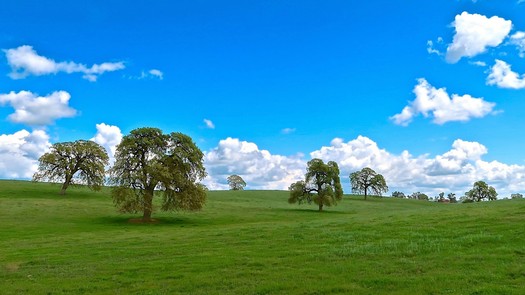 Grasslands with ancient oaks — acorns from which were a primary food source for Plains Miwok tribes — in the rolling hills along the eastern edge of the present-day Lodi AVA, near the Mokelumne River.

Perhaps one of the most eloquent California admirers to attract an audience among Easterners was Hall J. Kelley, who was described as "an apostle of westward expansion." In 1839, Kelley submitted a report and urged the annexation of California.

"When I remember the exuberant fertility, the exhaustless natural wealth, the abundant streams and admirable harbors, and the advantageous shape and position of High California, I cannot but believe that at no very distant day a swarming multitude of human beings will again people the solitude, and that the monuments of civilization will throng along those streams whose waters now murmur to the desert, and cover those fertile vales whose tumuli now commemorate the former existence of innumerable savage generations."

It was almost within "one decade," Kennedy concludes, that "Kelley's prediction came true." Those native "savages" had indeed disappeared while this "exuberantly" fertile land endured, quickly emerging as one of the most productive and prosperous farming regions in the entire country — including the appellation known as Lodi. 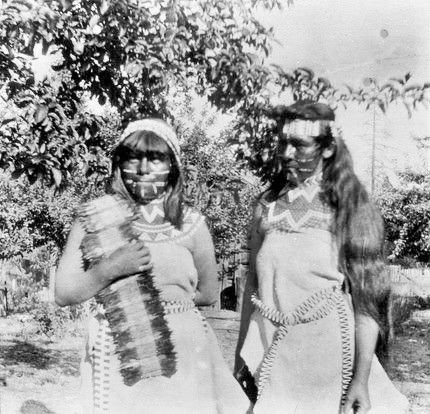