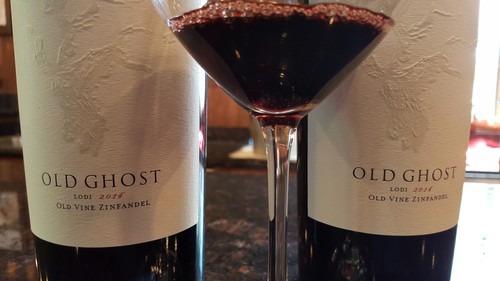 Klinker Brick's Old Ghost is born from a tale worthy of Halloween.

On a dark, foggy morning long ago

In a place few would dare to go

There stood a grower in the eerie light

Gazing at a frightful sight

Causing the grower to wonder, what is this?

As the sun rose, it became all too clear

The grower had nothing to fear

The shadows cast were old and true

For their fruit went into bottles loved far and near

No one could have known on that dark, foggy morn

A beautiful wine would be born

So, what to name this wine crafted from its spooky host?

But simply and aptly ... the Old Ghost

The story behind Klinker Brick’s Old Ghost is kind of spooky — a perfect Halloween tale.

Actually, the name, Old Ghost, was inspired by a vineyard.

More than a decade ago, in the foggy, pre-dawn hours, Steve Felten looked over an abandoned vineyard along the Mokelumne River planted to head-trained Zinfandel. He said some of the vines were missing and other parts appeared to be dead.

"It was a mess and there was a little fog sifting through it," said Felten, winegrape grower and owner of Klinker Brick Winery in Lodi. “It looked kind of eery and I said, ‘It looks like a ghost takes care of this place.'” 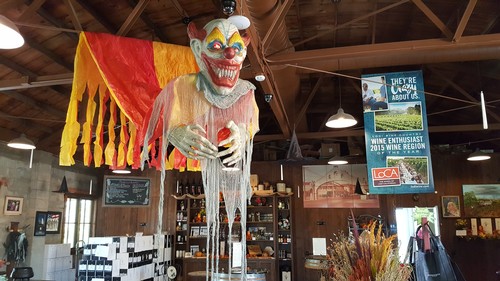 A scary clown overlooks the tasting room at Klinker Brick Winery for Halloween.

The 2003 Old Ghost was the first vintage from the spooky vineyard. Since 2007, the vineyard sources, all of them Klinker Brick estate properties, have changed, but the mission has remained the same.

“The Ghost isn’t tied to one vineyard,” Felten said. “It’s whatever we feel is the best, like a reserve wine.”

The Old Ghost label is etherial — embossed white on white. The wine sees 60 percent American and 40 percent French oak. Felten describes the wine as being elegant with layers of flavor that shows the versatility of the grapes and vineyards in Lodi, and what growers and winemakers can do with them.

Klinker Brick makes about 5,000 cases of Old Ghost and sells out every year.

“It’s our cult wine,” he said. “It has a tremendous following.”