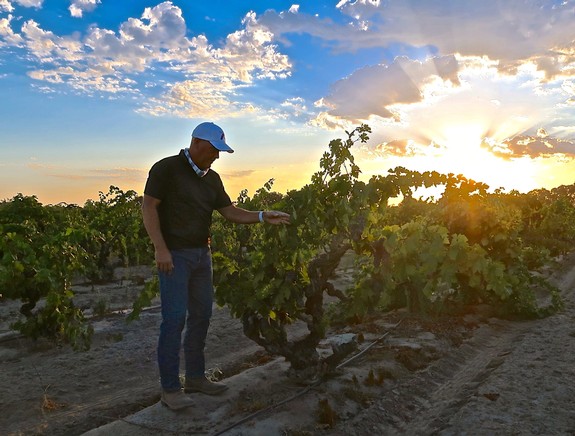 McCay Cellars owner/grower/winemaker Mike McCay in his Lot 13 Vineyard (own-rooted Zinfandel planted in 1915) at the break of dawn on August 11, 2020

Earlier this week (August 11, 2020) we asked to tag along with McCay Cellars owner/grower Mike McCay during part of his early morning vineyard walks.

Typical of most of 2020's summer days so far, the early morning started off in the lower 60°s, barely hitting 72° by 9:00 AM. Perfect morning constitution weather. Weather is dry as a bone with high wispy clouds at the most, and the gentle breeze blowing in from the Sacramento-San Joaquin River Delta has been consistent during the early morning hours, picking up at the end of each day. Lodi winegrowing weather. 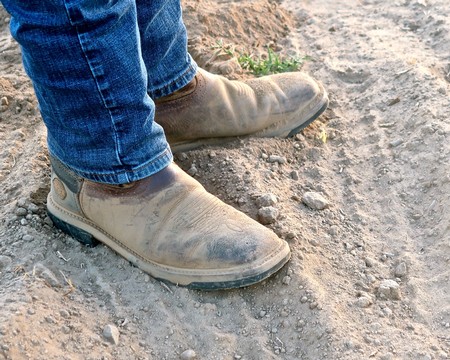 In his own words, Mr. McCay's observations of vintage 2020 thus far...

This year I've been doing something different at Lot 13 (McCay's estate grown Zinfandel and Tempranillo planting), and the vineyard has been responding a little differently.

For the past three years I've been farming part of it for Ridge Vineyards, pulling leaves and dropping fruit to get them a little more of what they're looking for — more tannin structure which you get from smaller clusters and berries.

But in doing so, I think we lost a little of the brightness that we'd been getting from the vineyard in previous vintages. Even my own Lot 13 "Faith" Zinfandels have been coming out a little "big." The wines are more intense, but I'm not sure if this is what the vines want to be. So in 2020 I've left more canes and fruit on the vines in hopes of getting back a little more of that light, bright, sexy side of the vineyard, a little more of those flowery, lavender notes, and that perfumey red fruit which is a basic component of this vineyard. 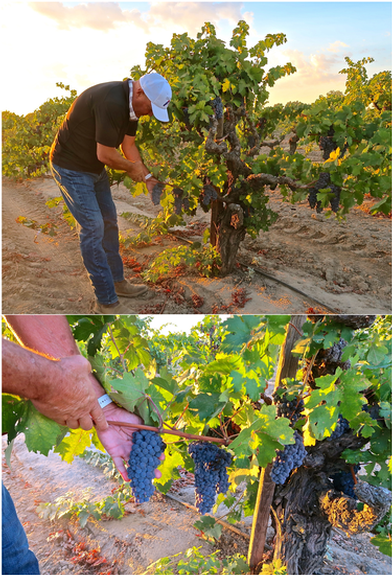 2020 Zinfandel in Lot 13 Vineyard: healthy clusters (yet small and cylindrical, typical for this vineyard) and leaf canopy

You've often heard me say, "round hole, round peg." I wanna get back to a more natural fit for this vineyard.

This year, especially, the vines are responding to that heavy rain event we had last year. These old vine roots go down at least 30, 40 feet, and I think they're still sipping that water from back then. Clusters are a little bigger, and leaving the extra canopy gives the vines a better balance. This year we'll shoot for 23.5°, 24° Brix (i.e. sugar reading), about a percent less sugar than previous years to get more vineyard expression in the wine. Then we'll compare vintages and see what happens.

Of course, every year is different. If anything, so far 2020 has been a home run vintage. We haven't been getting those consecutive days of 100°-degree temperatures in early and mid-summer like we've been getting in recent years, although we expect that to happen at the end of this week. But there's been some nice cooling off at night, no rot issues and few problems with mites, which can brown the leaves. 2020's veraison (i.e. changing of color in black skinned grapes) was a little later and longer than last year. 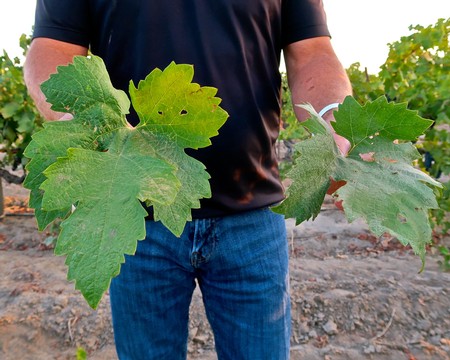 Leaf size variation from Lot 13 Vineyard plants growing right next to each other — not unusual in ancient vine growths of varying morphology, populated by material planted over the course of over 100 years

Last year we dry farmed because of the heavy spring rains, but this year we've given the vines a little water to push the canopy. We can't water a lot because then this vineyard would grow big, hairy Chewbacca vines, which I've seen before we took over the vineyard, in 2011. Still, the vineyard is healthier than ever. Many of the weaker vines that used to grow just two or three canes, and barely one or two clusters, are back to giving us at least three times more. Composting has helped a lot, and just working hard on each vine.

I'm looking forward to the harvest, maybe by mid-September — I can see the wines getting back to the vineyard's red-berryish, bouncy character that has made it so unique, even compared to Zinfandels from right next door (i.e. Tegan Passalacqua's Kirschenmann Vineyard along Lot 13's west side, and the late Ross Schmiedt's Dairy Vineyard to the east, alongside the Mokelumne River). 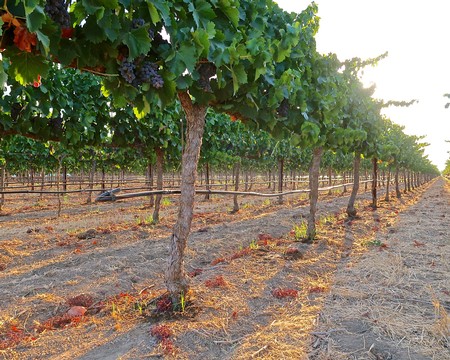 Every vineyard and every year is different. That's what makes things so interesting.

Here, in Phil Abba's Grenache block, the vines are just now getting through veraison, as of August 10. We've picked these vines as early as August 20 in some years. It's not going to happen this year (our note: owner/grower Phil Abba's current 2020 prognostication is a picking for rosés probably happening during the first week of September, and red wine programs probably starting in the third week of September).

Also, I've never seen the Grenache clusters so small, and the canopies are a little lighter. I see Phil has removed one of the catch-wires on the south side of the rows to allow the canes to flop over. This opens up the canopy a little, while at the same time gives the fruit facing the sun on the south side a little more protection. 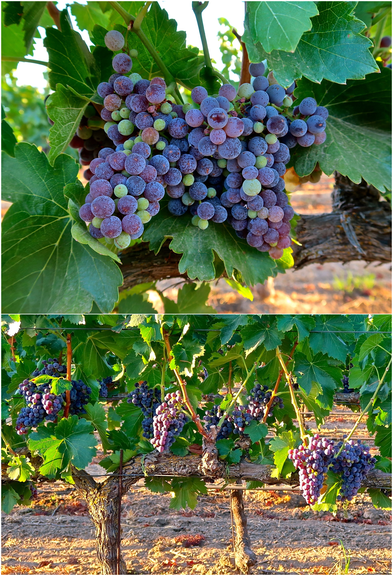 Every year Grenache becomes more and more important to our program which I want to be more Rhône focused, and Abba's the best I've seen. At our home vineyard on Bruella Rd. (jut over a mile from Abba Vineyard) we took out a chunk of our Petite Sirah, and last year we planted an acre each of white Rhône varieties — Roussanne, Marsanne, Picpoul blanc and Clairette blanche. We also planted red Rhônes— Mourvèdre, Grenache, Cinsaut, plus a little Tannat. Part of the new plantings, about 5%, are also inter-mixed so that we can do some mixed field blends.

The home ranch is like Abba Vineyard, on extremely deep, super-sandy soil. Pretty ideal. This will be an exciting "new" direction for our brand. 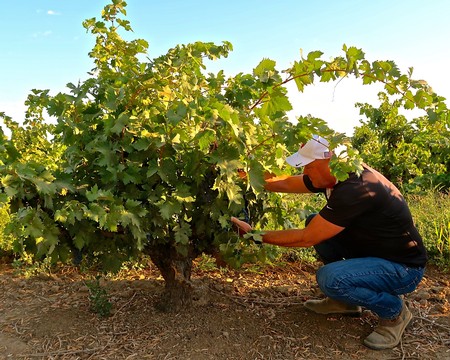 Feel that? (making note of the cool Delta breeze touching our faces). We didn't quite feel that on the east side. The west side of Lodi's Mokelumne River appellation is definitely different from the east side. Soils are similar, but each vineyard has its own character, and weather is not exactly the same in each spot. That's the reason I make wines from both sides, from so many vineyards. Why would I want them to be all the same?

Everyone talks about east and west sides of Lodi, and for good reason. 2020 will be our fifth year producing a Bonnotto Vineyard Zinfandel. The comparison with, say, Lot 13 on the east side is that the cluster and berry sizes in Bonnotto are bigger. It ends up making a "bigger" Zin — darker fruit, less red berry perfume, and a heavier feel, even showing off a little "muscle." 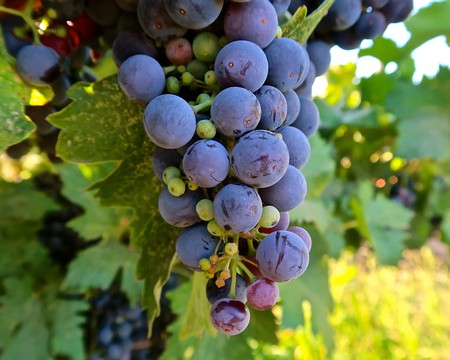 Close-up of loose clustered 2020 Zinfandel in Bonnotto Vineyard, showing the large berry morphology typical of the vineyard plus a large percentage of "jacks" (green seedless berries) that will drop out at the destemmer when grapes reach the winery

The differences in the vineyards is that you have bigger canes and more canopy on much smaller vines in Bonnotto. The soil is a little richer than most of the east side. The vines were originally planted in the 1930s by Ernie Spenker (a cousin of the Spenker family who own the nearby Spenker Ranch/Jessie's Grove estate), and the Bonnottos have been very good about keeping their original, short, gobelet (i.e. "goblet"shaped arms extended from a single head) style training.

This year we're seeing quite a bit more "jacks" (i.e. green undeveloped, seedless berries due to the after-effects of spring millerandage) in Bonnotto, which can be good because it can make a looser cluster, meaning less rot. I do see a little rot here and there, but I think it's more from bird pecks. 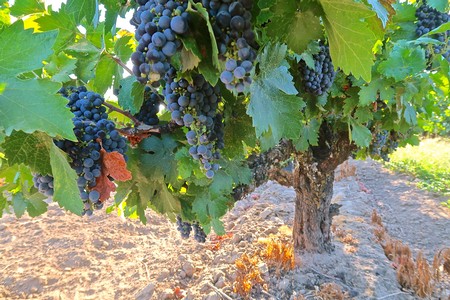 Bonnotto is usually our first vineyard to be picked on the west side — typically in early September before we pick Lot 13 on the east side, and before TruLux Vineyard on the west side, which has considerably larger vines producing a bigger crop. Our first Zinfandel to be picked each year is almost always Rous Vineyard (planted in 1909 on St. George rootstock), which has a similar type head trained vines like Bonnotto's, but ripens faster because of lower yields and that super-sandy east side soil. 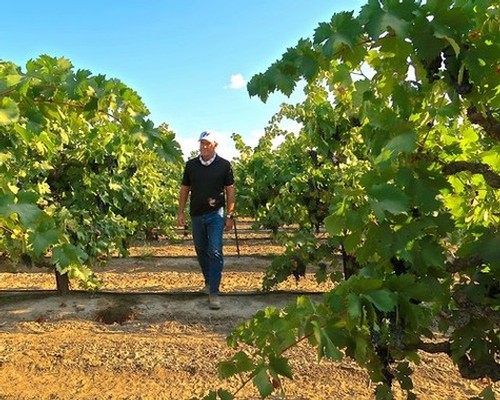 These are the "giants" — 6-foot tall vines, every one of them higher than my head, and weightier than what you just saw in Bonnoto Vineyard.

My first impression is that the vineyard is looking really nice in 2020. The vines have a good, healthy canopy, which is very open and airy enough for the Delta breeze to blow through, because the spurs are growing up and down a single trunk, which makes for more of a "ladder pruning" — a child could can climb up these arms. 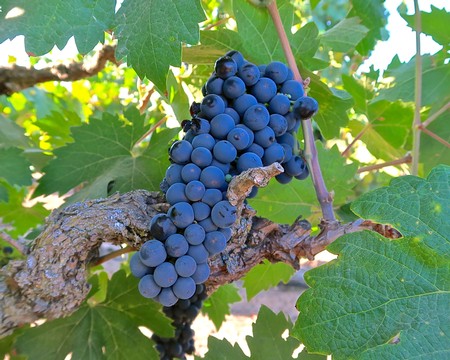 You can see that Keith (owner/grower Keith Watts) has been doing minimal leaf pulling or cane trimming because he hasn't had to this year. In most years the canes in TruLux grow so long that they start to grab on to each other between the vines, making it so you can barely walk through the block. This year it looks like the vines stopped growing most of their canes on their own, which means they've been focusing on maturing their fruit a little sooner. The fruit looks a little bigger, more voluptuous than in years past — maybe a few more "jacks" than usual, but in long, loose clusters typical for TruLux. 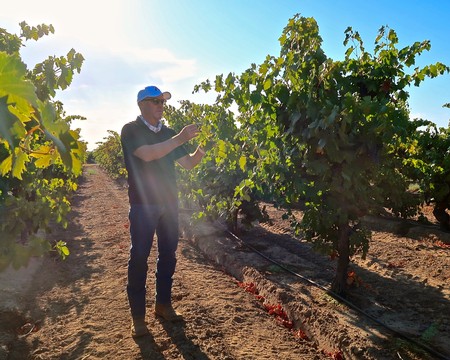 What you're seeing is the reason why TruLux has always been one of most interesting Zinfandels. It always has more "spice" and earthiness than our other Zinfandels, and more of a cola/black cherry fruit quality. It's also a little more of a structured wine, typical "west side," almost the opposite of Lot 13 on the east side.

Because of the tall size and shape of these vines, a balanced vine for TruLux usually means about 5 tons or more per acre. Compare that to Rous Vineyard on the east side, which has typical head trained vines — 3 tons for Rous is a "big" year. 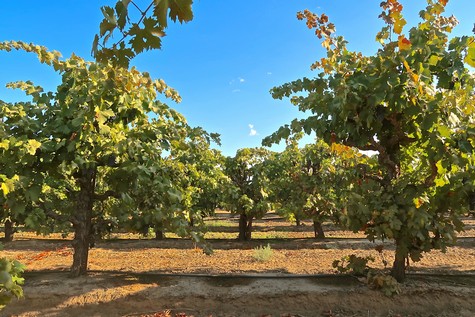 We'll probably end up picking TruLux around our normal time this year, which is usually about the third week of September, if not a little later. We have a week of 100°-degree weather coming up, which will slow things down (our note: grapevines typically shut down when temperatures climb above 90°, which prolongs the maturation process), so we'll see.

Otherwise, 2020 is looking like it will be an interesting year because vineyards on both sides of the Mokelumne River appellation are looking very happy! 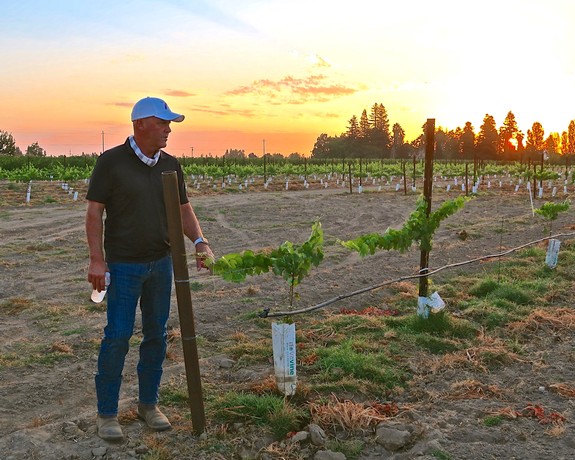 McCay Cellars' Mike McCay in his home vineyard on Bruella Rd., replanted in 2019 to 4 white and 4 red varieties of Rhône cultivars