Lodi grapevines during the merry, merry month of May 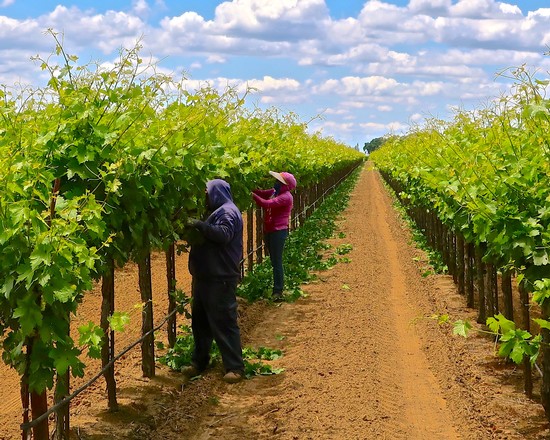 What is happening out in Lodi vineyards today, during the merry, merry month of May? Pretty much the same as in most of California's vaunted wine regions, since vineyard growth patterns in Lodi mirror all but the most extreme regions of California (more extreme examples being the tiny pockets of ultra-cool climate zones in Santa Barbara, nosebleed ridgetops in Mendocino or Santa Cruz Mountains, or super-hot regions like Kern County).

But in moderate regions like Lodi, Sonoma County, Napa Valley, Livermore Valley, or most of San Luis Obispo County — all sharing the commonality of a coastal Mediterranean climate — shoot growth on grapevines is currently somewhere between 1 to 4-feet in length, and pushing out further at a rate of about an inch a day. 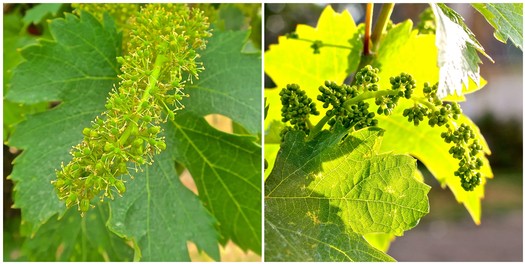 Zinfandel in May: (left) during mid-bloom, and (right) fruit set immediately after bloom

Late afternoon temperatures are rising to near-summer highs, skies are less cloudy, and rainfall, once again, is becoming a distant memory. Among the grapevine shoots, the bunches of little, green nibbles that are destined to become grape clusters are just starting to pop into demure and delicate flowers with a discreet, fragrant scent of their own. This stage of grapevine growth is called "bloom," which leads directly to self-pollination and fruit set, happening all within a matter of a few days.

Out in the vineyards the work that is primarily going on in mid-May while vines enter bloom is shoot thinning and leaf pulling. Grapevines always require a good amount of leaves, or "canopy," to perform the basic physiological function of photosynthesis — the process of converting energy from sunlight captured by leaves into chemical energy needed to fuel the metabolic growth of plants. 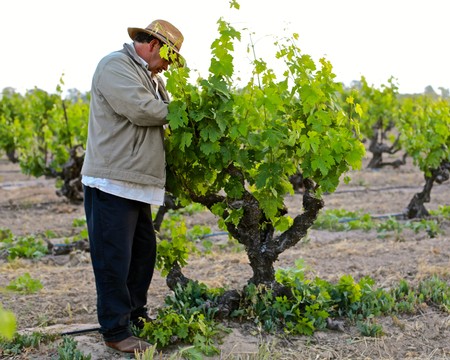 But for grape growers, a shrewd, selective removal of shoots and leaves can also enhance the ratio of fruit to leaf canopy, which can ultimately increase quality of fruit. Even in super-large wine regions like Lodi's (easily the largest in the country), a lot of this work is still done by hand.

A couple of years ago around this time a visiting Sonoma County-based winemaker named Greg La Follette met up with a number of Lodi's top growers at Acquiesce Vineyards to talk about something he calls "carbohydrate repartioning strategy," or "CRS." 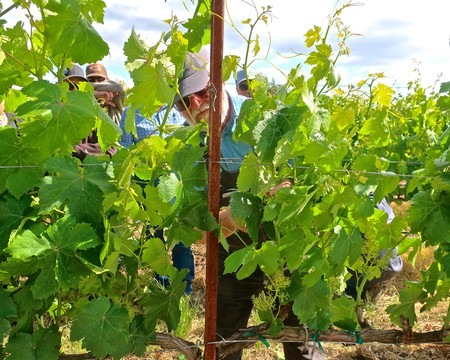 According to La Follette...

I use a carbohyrdate repartitioning strategy in the vineyard, which is achieved through selective leaf pulling and water deficits very early in the season, in order to steer vines toward reproductive rather than vegetative growth [i.e., away from shoot and leaf growth and more towards growth of grapes, which contain seeds that every plant harbors for possible reproduction]. This also limits the number of clusters and the berries’ cellular division and expansion.

According to La Follette, the sooner a grapevine can be triggered to make this transition from vegetative to reproductive mode, the better. That is, the sooner you can get a vine to enter a fruit ripening stage, the sooner a high quality fruit maturation process can begin. 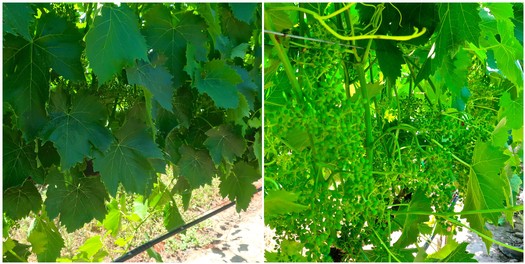 One of the ways recommended by La Follette to accelerate this phase during spring bloom is by artfully removing leaves directly opposite and subtending the grape clusters while they are still green (or before black skinned grapes turn color). This action creates a momentary carbohydrate deficiency during flowering and berry cell division, changing the flow of carbohydrates from the leaves above the cluster, and thus redirects carbohydrates from shoot tips and back to clusters. The advantage of this, especially in warm climate regions like Lodi, is that grapes can reach an optimal level of aromatic flavor and phenolic content sooner rather than later — that is, before sugar levels get too high, which results in wines that are lower in alcohol, and thus with a better sense of balance. 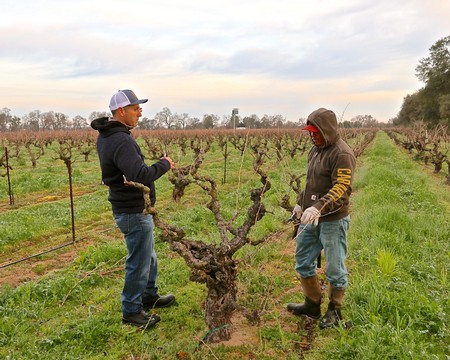 Jeff Perlegos, who farms Zinfandel and other varieties on both the east and west sides of Lodi's Mokelumne River AVA, as well as in the Clements Hills AVA just outside the little community of Clements, talks about the last two vintages where he has applied Mr. La Follette's strategy of pulling leaves around the fruit zones as early as during May bloom:

I pull leaves right at the start of bloom because it temporarily starves the clusters of carbohydrates. The only thing is, it can also induce shatter [i.e., when not all the flowers self-pollinate, leaving small percentages of unset fruit in the clusters). I also learned this can happen from Cornell University where they studied this quite a bit in their area [Finger Lakes, New York]. It can happen if you do it too soon, during 'trace bloom' [i.e., just as flowering begins]. In our Stampede Vineyard in Clements Hills, we did it to loosen clusters up [which has the benefit of diminishing rot in Zinfandel, which can grow in tightly packed clusters], but last year [in 2020] it shattered more than we anticipated, which gave us lower yields. We got zero rot, but not as much fruit as we'd like to get. 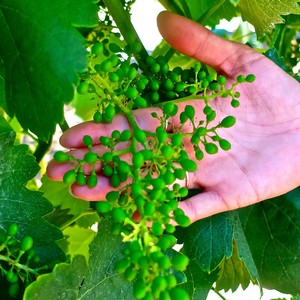 Lodi grape clusters in June, not long after bloom and fruit set

I think Greg La Follette probably pulls leaves right after bloom has finished, which is what we have also done in our west side side vineyards where we rarely get rot, so never really needed to aim for looser clusters. Last year we had our best year ever on the west side, by pulling leaves just after bloom.

The last two years we pulled all the leaves from the base leaf all the way to the leaf opposite the second cluster. It made a big difference in grape quality for us, like night and day — almost no rot and better fruit than ever. But because we're also concerned about yield — especially in Stampede Vineyard, where vines are so old that they tend to self-regulate, and can draw water from the ground even after we stop irrigating because their roots are so deep — this year we plan to pull leaves only around the opposite clusters, and we'll wait until after bloom to do it.

In areas where higher yield is desired or shatter is already more prevalent (as is the case in many of our Sonoma Coast vineyards), it is indeed better to pull leaves right after bloom, which will still affect berry cell division and berry cell expansion, also opening up clusters due to smaller berry size. The quality increase can still be quite dramatic. For the yield, the grower will indeed see a reduction for the first year, but with the pulling of the leaves, there will be more solar exposure to next year's fruiting zone, meaning an increase in bud fruitfulness. After year 3, the vines will balance and there may be an increase in yield due to increased cluster count. But still with smaller berries and more open cluster achitecture. Higher quality, same or even increased yield.

And that, if anything, typifies the thoughts churning around in the minds of grape growers, especially during the warm and fragrant days of the merry, merry month of May! 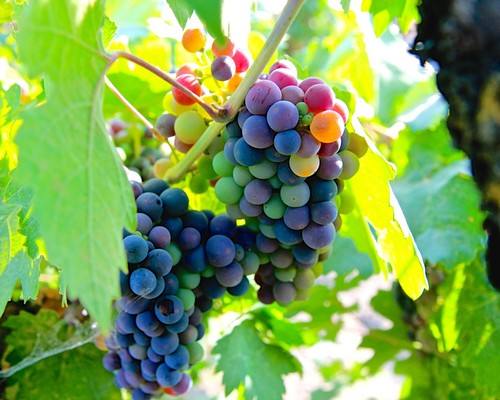