August 2020: moments before dawn this past week in Lodi's Vino Farms, a mechanical harvester gets maintenance work after a night of grape picking

To everything there is a season. Especially at the start of each year's harvest, which is the height — the culmination — of all seasons. At least in Lodi, America's largest winegrowing region.

Lodi is the largest because most of its wine grapes go into wines that most Americans actually drink. The bottlings you see on the grocery store or volume retail shelves, landing in the shopping cart. These, admittedly, are wines that are more like "products" reflecting consumers' expectations of varietals or brands, often with eye catching labels.

More and more Lodi grown wines, however, are being handcrafted — many of them au naturel, or with minimal manipulation. Native yeast ferments, picking earlier to avoid acid "adjustments," aging in neutral tasting oak or with no oak at all... typical practices leading to wines more likely to achieve sensory qualities that remind you that every region is utterly unique. Each vineyard — each block, row or vine — now finding individual expressions in the bottle simply because, at its roots, it can't be duplicated. Very Lodi wines. 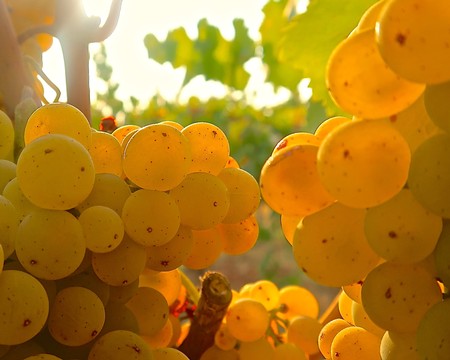 August 2020: golden, luscious Ribolla Gialla grapes in Clements Hills-Lodi's Mio Vigneto Vineyard this past week, just about ready to come off the vine

In the case of Lodi, it is vineyards that have been loved and expanded, for the most case, by caretakers with ties to the land going back two or three, and sometimes five or six, generations. Not too many American wine regions can say this is more common than not. Lodi can. This is a farmers' region. It reminds you of that enduring fact: the best wines are not "made," they are grown. They come from fruit and vines, and taste like that. The farmer is the man.

Every vintage, as it were, is as much a reflection of Mother Nature's whims as "man's foibles (as the famous wine importer Kermit Lynch once put it). In 2020, for instance, Mother Nature said "harvest starts in August." These are marching orders, never requests.

Lodi, when all is said and done, is a wine region like many others, producing the finest possible Lodi wines the same way that Napa Valley produces the finest Napa Valley wines or Bordeaux produces the finest Bordeauxs. Truly catholic wine lovers know this, which is why these kinds of aficionados may be the happiest of them all. Their appreciation of the world's best wines knows no bounds.

Some photos of the past year so far, showing Lodi at its own particular best, following the natural rhythms of the seasons... 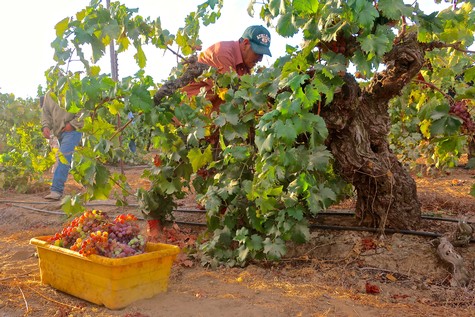 Last year in September 2019, harvest of Lodi's oldest vines — here, ancient vine Flame Tokay planted in Jessie's Grove in 1889 — was in full swing, as the oldest vines carrying the smallest loads of fruit are usually the vines that ripen the fastest 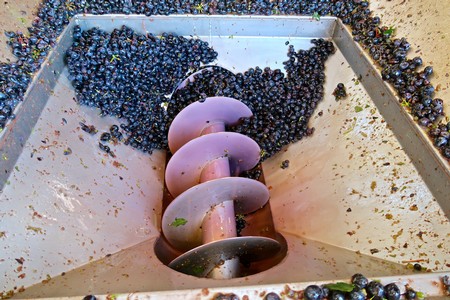 Sangiovese, another fairly early ripener, being destemmed and transferred to a fermenter in the Oak Farm Vineyards winery 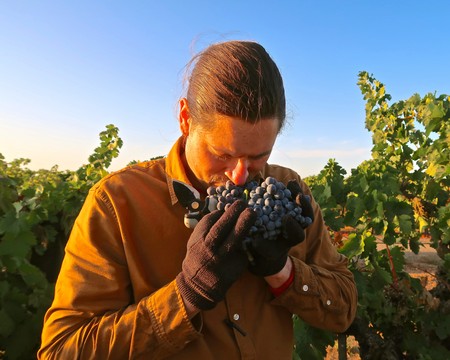 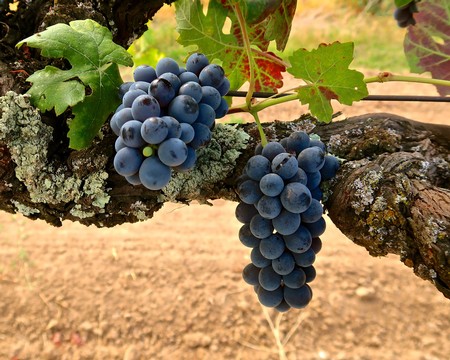 Barbera, known for having the highest natural acidity among all black skinned grapes, is usually an October pick — even smaller-than-typical clusters grown in Lodi's Leventini Vineyard, an "old vine" planting (for Barbera) dating back to the 1970s 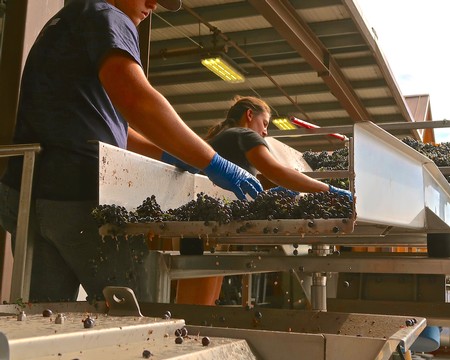 High tannin grapes like Cabernet Sauvignon (in this photo, being sorted at the destemmer in Oak Farm Vineyards) also usually take until October to come to optimal maturity

Nebbiolo (in Lodi's Anaya Vineyards), a black skinned grape that is high in both acid and tannin, takes until late in October to come into balance, when many of the leaves on the vines are already turning into fall colors 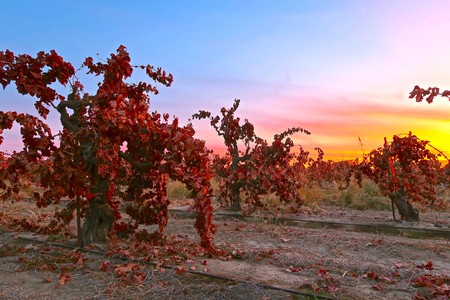 By November, when virtually everything is picked and the air grows damp with fall weather, leaves are drained of their green color and turn into bright yellows, oranges and reds — particularly ancient vine Alicante Bouschet (in this photo, in Lodi's Rauser Vineyard, planted in 1909) which is already predisposed towards premature coloring 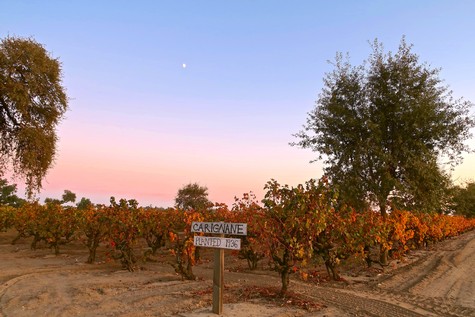 Fall colors in Mokelumne River-Lodi's Bishofberger Vineyard Carignan block (planted 1936), owned and farmed by one of Lodi's oldest families (the Bishofbergers, cousins of the Phillips and Maleys, all descended from Andrew Harshner who arrived on Lodi's west side in the 1860s)

Lodi days grow grayer, foggier and chillier by the end of November, as grapevine leaves prepare for their demise and winter is nigh 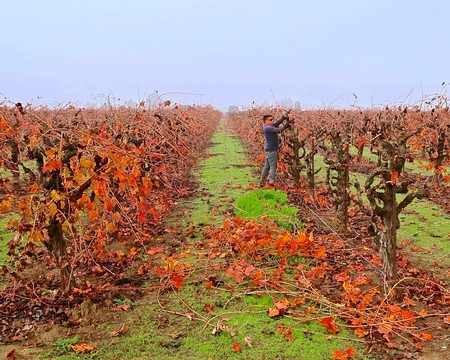 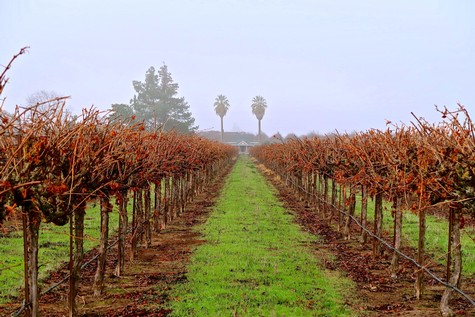 This trellised Mokelumne River-Lodi vineyard was mechanically pre-pruned (long canes cut and removed) in early December — when possible, pruning crews will come through to finish the job by hand 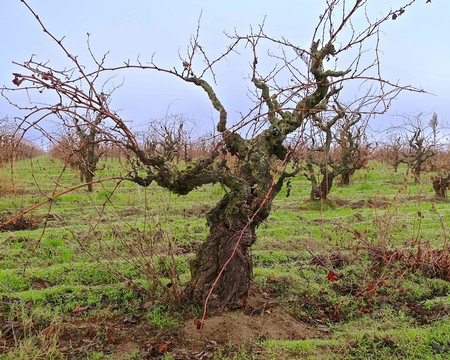 This east side ancient vine Zinfandel (in Turley's Steacy Ranch, planted in 1907) is still awaiting its winter cut in mid-December 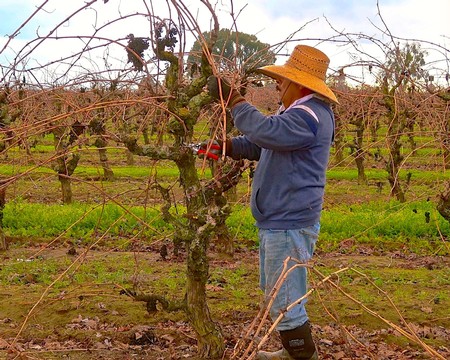 The never-ending work of winter 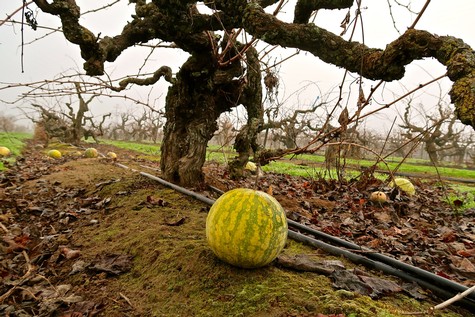 Among Jessie's Grove's ancient Zinfandel vines (this block planted in 1889), "wild" melons pop up as vestiges of the 1880s when Lodi was, for a brief time, known as the "Watermelon Capital of the Country" 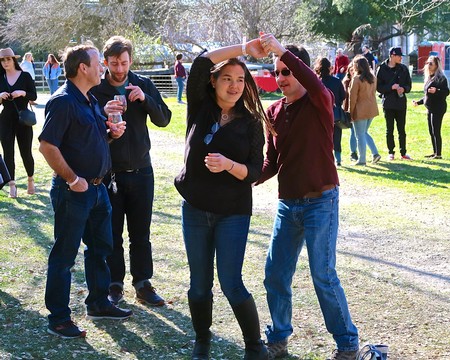 Remember these footloose and fancy-free days? This was Lodi's "last hurrah" only last February, during the annual Lodi Wine & Chocolate Weekend, before being shut down by the coronavirus pandemic along with everyone else in the world 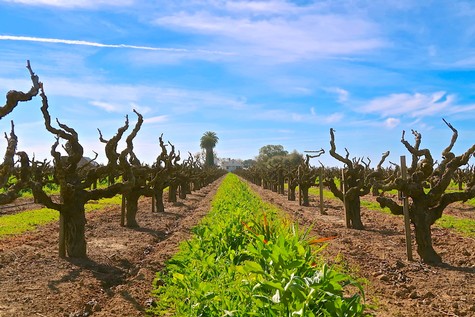 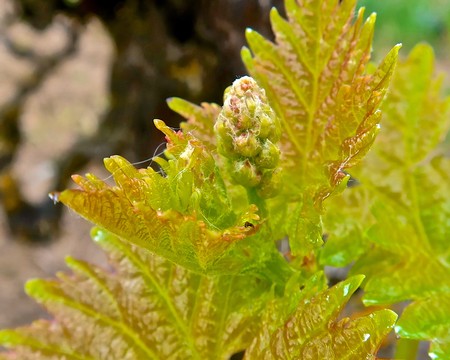 March marks the season of warmth, the arrival of spring, and bud break among the vines — here, the emergence of leaves and what will soon be a grape cluster in one of Lodi's fabled ancient vine Tokay plants 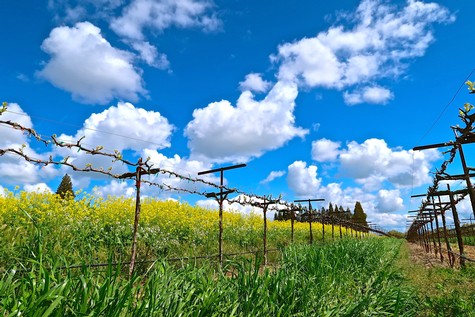 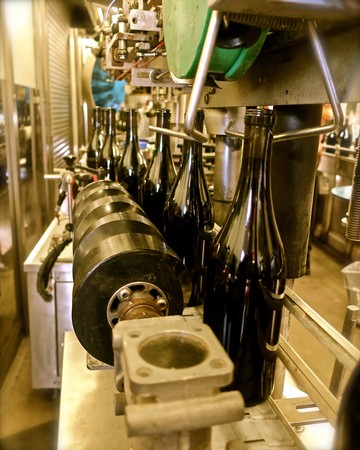 While the days just before spring are relatively quiet in the vineyards, as grapevines just begin to bud out, many wineries are busily bottling both the previous vintage's white wines and also reds that have been in barrel for over a year or two 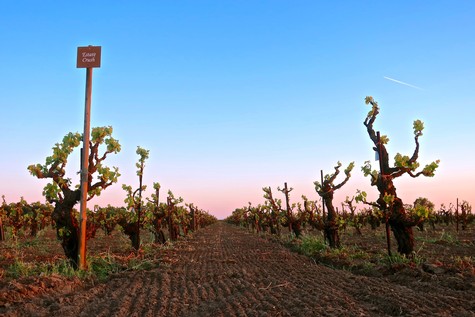 During April tall cover crops are usually mowed to allow grapevines to push their spring growth, as in Lodi's venerated Bechthold Vineyard, Lodi's oldest vines (Cinsaut planted on its own roots in 1886) 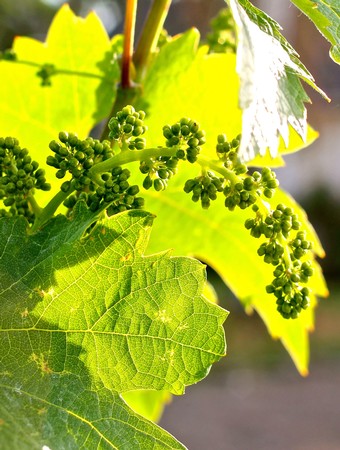 Things move quickly during the warm and merry month of May, as in this old vine Zinfandel growth's emerging grape cluster in pre-bloom, happening while leaves on lengthening canes open up to the sun to convert its light's energy into growth 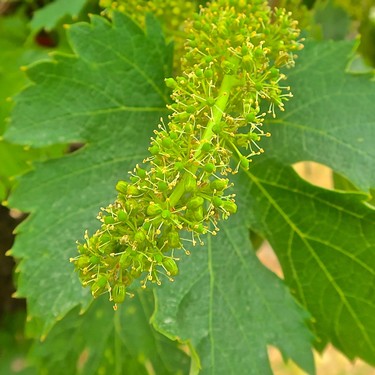 Now for May's magical moments, when flowers bloom and self-pollinate and then voilà, the grapes that are eventually converted into the wines we love 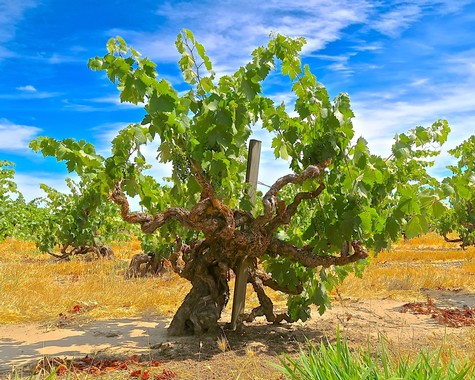 Magnificent "old man" Zinfandel in Mokelumne River-Lodi's Marian's Vineyard (planted in 1901), beginning to push the ripening of its still-green clusters, given impetus by the leafy canes growing from its long, elongated ancient spurs 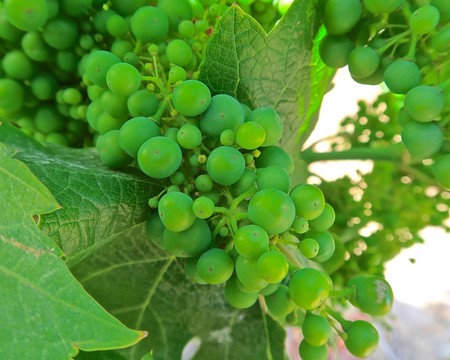 Close-up of Marian's Vineyard's 2020 Zinfandel cluster in June, the uneven berry sizes (caused by a varying number of seeds) a reflection of both the vintage and the varietal ("hens and chicks" sized berries being typical of the variety) 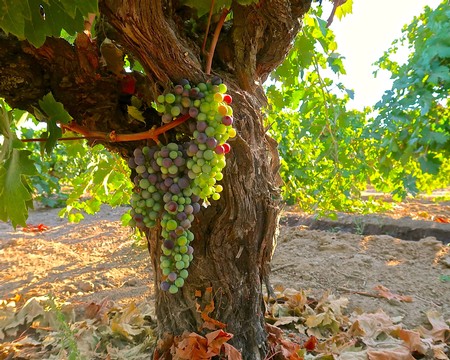 In July 2020 it was magic moment #2 — as in this 1940s block of head trained Grenache in Lodi's Manassero Vineyard — when black skinned grapes turned color during a process called veraison, and vines shifted their energy from growing canes and leaves to building sugars and flavors in their clusters 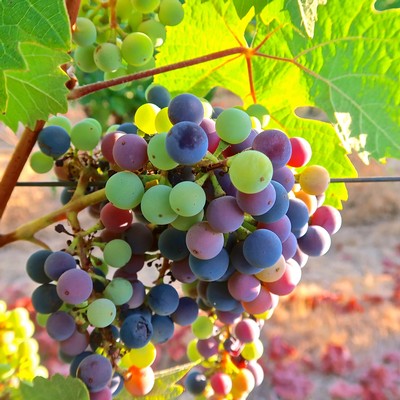 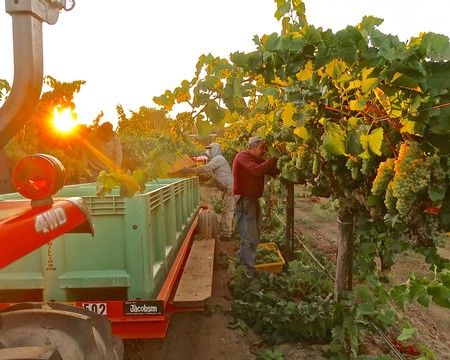 Although each year's California table wine harvest doesn't start until August, the first pick — Chardonnay grapes harvested at lower sugars (less than 19° Brix), with higher acids, specifically for sparkling wines (which require high acidity to be crisp and light) — often takes place towards the end of July, as it was in Phillips Farms' Bare Ranch (for Michael David Winery's sparklers) 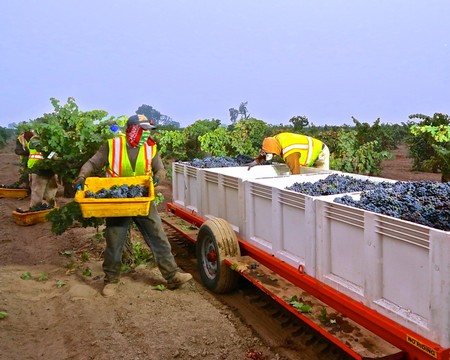 Lodi's oldest vines typically ripen first — hence, Lodi's oldest vineyard (Bechthold Vineyard Cinsaut, planted in 1886) was harvested just before dawn by Phillips Farms for Turley Wine Cellars during 2020's third week of August, although in many years this vineyard is picked in September 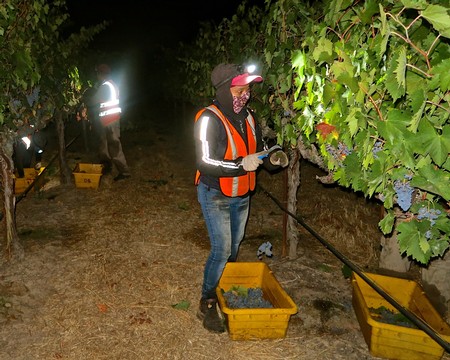 Vino Farms' 2020 pick of River's Edge Vineyard Sangiovese came earlier than usual this year because of the lighter fruit set and cluster weights; and like many of Lodi's major farming companies, Vino Farms now does almost all of its hand picking during the night (typically starting at 8 AM and knocking off by 4 or 5 AM) to reduce heat stress and fatique, and also to make it more convenient for women (many of them mothers) to work 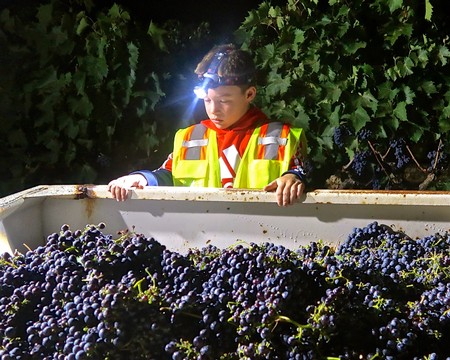 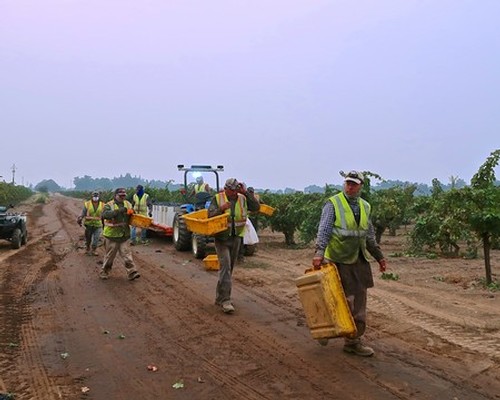