Lodi in the 2018 national news

Lodi is undoubtedly California’s oldest “up and coming” wine region. Although wine grapes have been cultivated here since the 1860s, its reputation for artisanal style, small-production, sustainably farmed wines has emerged only within the past ten to twenty years.

Today, the sleeping giant (there are more wine grapes grown in Lodi than, say, Napa Valley and all of Sonoma County combined) has fully awakened, and the national wine media is taking notice. Some of the more significant stories coming out over the past year...

Says Wine Enthusiast, “Something subversive is afoot in the vineyards of Lodi”

According to a July 2018 transcript of a podcast sponsored by Vivino, widely read Wine Enthusiast Magazine contributing editors Jameson Fink and Jim Gordon discussed how “forward-thinking winemakers are embracing experimentation by working with Lodi grapes that will surprise you.”

Mr. Fink talked about how “while I was doing some reading on Lodi... I came across this phrase... something subversive is afoot in the vineyards of Lodi, California.”

Lodi growers in a pre-"subversive" era

As Gordon opined: “I kind of think they’re trying to go 180 degrees from what people think of Lodi. People think of it producing sort of fat, lazy Zinfandels or big Chardonnays that are kind of soft and buttery. I think a lot of them are trying to do something the opposite of that, like crisp or tannic or biting or more vivid, not just a big softy like the mass market ones, but something more artisanal, more interesting, more intellectual (our italics) in a way.

In response to Fink’s story about one of his “Lodi eye opening” moments – in a “hipster, natural wine bar” in New York City, where he enjoyed a Lodi grown Cinsaut from a vineyard planted in 1886 – Gordon described these phenomenal wines as “almost like Pinot noir... elegant... kind of ethereal... not very dark colored … even though it’s a Rhône grape variety... they make something kind of beautiful out of it.”

Something is definitely "afoot" in Lodi. Countless Lodi wine lovers can’t be wrong, and mainstream wine media is catching on!

To get in more on this podcast conversation, see What We’re Tasting Podcast: Embracing Lodi Wines, Unique Grapes and Ancient Vines. 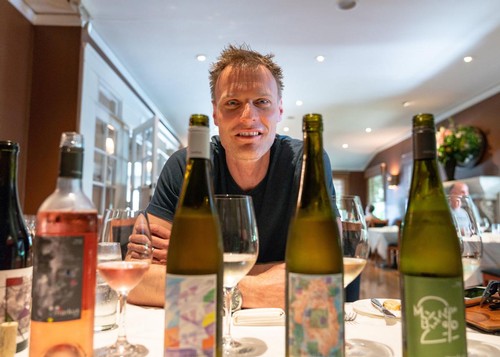 In other words, not much escapes Mr. Carl’s eyes, and this is what he saw in Lodi: “A new breed of winemakers and grape-growers have lifted Lodi wines to a whole new level. Unlike other regions that may be limited to a handful of viable different grape varieties, Lodi grows a plethora of different wine grapes — more than 100 — which has allowed vintners to explore, tinker and find unique niches for their brands...

“Lodi’s rapid rise is largely due to three factors: 1) the cost of land is relatively low; 2) Lodi is large (over 110,000 planted acres, compared to Napa's 45,000), displaying a wide diversity of microclimates that can grow everything from heat-loving Zinfandel and Cabernet Sauvignon to cooler-climate varietals such as Kerner and Gewürztraminer; and, 3) the culture encourages wine experimentation.”

Adds Carl: “The world is watching,” and there are “more and more quality winemakers producing a staggering array of different wines... consumers and vintners are taking Lodi more seriously.”

To read more of Carl’s article, see Lodi rising: The region's wines are taking off and the world is watching.

This past November, Wine Enthusiast named Adam Mettler of Lodi’s Michael David Winery its 2018 Winemaker of the Year. Mind you, this nationally read magazine selects its yearly “best of” nominees on an international basis. Mettler was pegged out of four other finalists, which included acclaimed winemakers working in Australia, Italy’s Barolo region, France’s Champagne region, and Napa Valley.

According to the magazine: “As director of wine operations for a fast-growing California winery, it’s Adam Mettler’s job to oversee a wine-production team of about 45 people, including winemaking teams in both Lodi and Sonoma...

“The winery is anticipating a total production of 900,000 cases this year, with an average price of $18 per bottle, and Mettler says his main responsibility is to make sure the whole range ‘overdelivers’ on quality. Consumers often associate Michael David’s bottles with big flavors, brash labels and tongue-in-cheek names like Rage, Freakshow and Inkblot. But the quality of the juice inside should not be underestimated.

“’I am not the fun guy, the creative guy,’ says Mettler. ‘I am the get-things-done-behind-the-scenes guy. I like to think that our wine quality has gotten better over time even with the growth, which doesn’t always happen for people. That’s an awful proud thing and a testament to all the people working for me here.’”

You can read more about Adam Mettler: Winemaker of the Year on this Wine Enthusiast page.

No question, sustainability has become a big deal in all aspects of agriculture, all over the world; and in 2018 a California Green Medal was awarded to Lodi’s KG Vineyard Management owned by Ben Kolber and Kris Gutierrez, who farm over 2,000 acres – primarily in the Lodi Viticultural Area – certified by LODI RULES for Sustainable Winegrowing.

Each year, the California Green Medal is awarded to vineyards and/or wineries who lead the winegrowing industry in the “2 E’s’ of sustainable farming: environment, economic and social equity.

In recognizing the KG Vineyard Management, the Sustainable Winegrowing Leadership Awards committee cited how “KG is active in the area’s leadership roles and strives to fulfill a vision of success for Lodi and the surrounding community... fostering strong relationships with clients, employees and neighbors,” including the "implementation of safety training in Urdu," the Pakistani/Indian language spoken by over half of KG Vineyard Management's full-time employees (60 to 80 at any given time of year).

This past May 2018, the influential San Francisco Chronicle helped burnish the burgeoning reputation of Lodi wine country for alternative wines – that is, a huge variety going beyond the usual California litany of Chardonnay, Cabernet Sauvignon, Pinot noir, Merlot and Sauvignon blanc – by saying: “Today, wines made from Lodi fruit encompass a full rainbow, from fresh, bright, high-acid white wines to earthy, light bodied reds. Of course, there’s lots of Zinfandel, much of it bottled as single-vineyard wines from pedigreed old-vine sites.”

For the lowdown on more of Lodi's exciting, alternative wines, read Tasting Notes: The diverse, dynamic wines of Lodi.

In a lavish 6-page December 2018 spread entitled Lodi Looks Ahead (California's grapegrowing dynamo is adding fine wine to its résumé), the Wine Spectator – America’s most widely read wine magazine – Lodi is described as “the engine of California’s wine industry,” where there is a “strong sense of community, and camaraderie is high... Lodi’s tide appears to be rising.”

As Spectator reporter Aaron Romano points out, Lodi has a long legacy of “family farmers,” many of whom “have started their own wineries, committed to transforming Lodi’s workhorse reputation with fine, bespoke bottlings... a quiet movement that has been gaining momentum.”

Lodi, continues Romano, is also led by relative newcomers (since the 1990s) in the region such as Bokisch Vineyards; saying, “Markus Bokisch has opted for diversity, pursuing his passion for Spanish varieties such as Albariño, Tempranillo and Verdejo... there are also hidden gems such as old-vine Carignan and Cinsaut that are now being tapped by innovative and ambitious winemakers.