Lodi by the numbers, and where it stands among the rest of the world 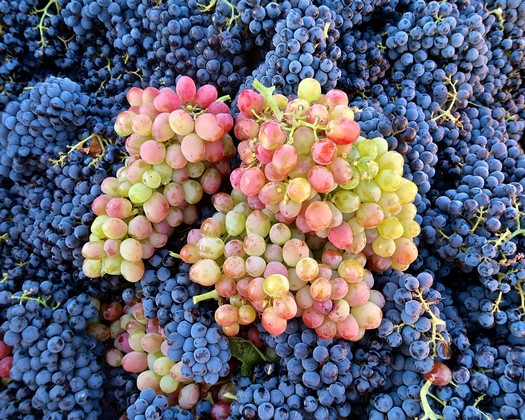 To get a true grip of the role Lodi plays in the world of wines, you need to see where the state of California stands in it. According to California Wine Institute's Discover California Wines website, California has a 60% share of the entire U.S. wine market by volume. This means about 3 out of every 5 bottles sold in the U.S. — including all imports — is grown and produced in California. California, which has (according to the Wine Institute) an estimated $114 billion economic impact on the entire country, also accounts for 95% of all American wines exported to other countries.

According to the most recent USDA statistics, the Lodi Viticultural Area crushes approximately 20.5% of all the wine grapes in California. This means just over 12% of all wine sold in the U.S. — again, including imports — is grown in Lodi. Not all the bottles may say "Lodi," since the region supplies most of the grapes going into value-priced bottles sold as "California" wine. Still, Lodi is... kind of a big deal.

Although it's been a moving target in recent years, the total acreage of wine grapes in California currently hovers around 635,000 acres. Lodi's 100,000 acres accounts for 15.7% of those acres.

Here is a fun visual we put together marking 1986, the year Lodi became an official AVA (i.e., American Viticultural Area), which happened at a time when the California wine industry was in the middle of its big push to meet the dramatically growing needs of American wine consumers, which necessitated the move into regions like Lodi — with its warm, consistent Mediterranean climate (wine grapes, after all, originated in the Old World's Mediterranean Basin) and grape-friendly soils — for its grape supply. 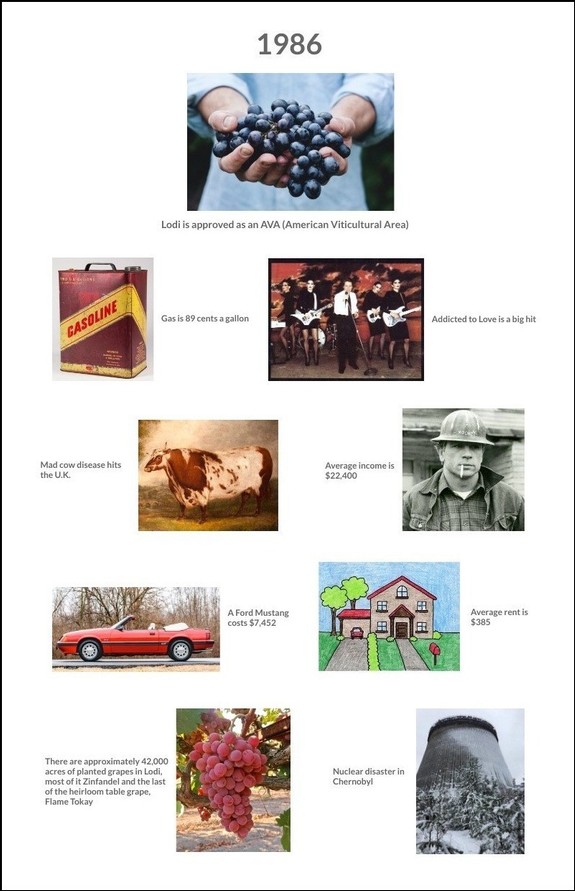 Since then Lodi has grown quite a bit, although primarily as a grape growing region. Inevitably, independent Lodi-based wineries have popped up, beginning with wineries like Borra Vineyards (established in 1975, but closed in in 2018), The Lucas Winery (1978), St. Amant Winery (1979), and Phillips Winery (founded in 1984, and quickly renamed MIchael David Winery).

The total number of Lodi area wineries has grown from about 10 to 85 over the past 20 years. But this is a drop in a bucket compared to the total number of bonded wineries in the entire state of California — over 4,200, according to the Wine Institute. The California Wine Institute also states that there are approximately 5,900 wine grape growers in the state. And so if Lodi's 85 wineries adds up to only about 2% of all the wineries in California, Lodi's 700 or so growers make up nearly 12% of all the growers in the state. Lodi, as previously stated, is primarily a grape growing region.

Another visual, painting the picture of where Lodi stands as a region within the state of California. 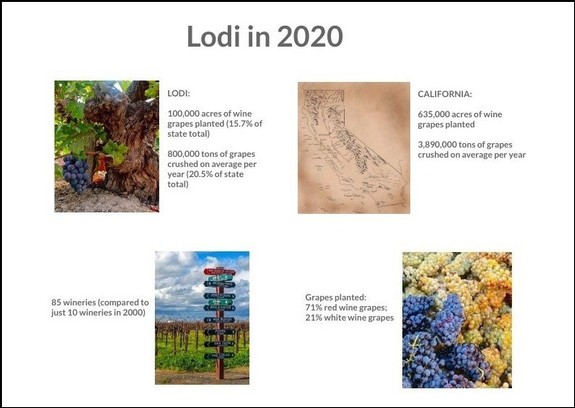 The last time we checked, there are over 125 wine grapes commercially grown in Lodi. Why? Because Lodi's climate and soils allow for it, and also because wineries, both big and small, like a good variety of grapes. The six most widely planted grapes in Lodi, however, represent what the American wine market in general is drinking the most. Yes, this includes Zinfandel despite the fading popularity of White Zinfandel. While an estimated 4,000 acres of Lodi Zinfandel have been pulled out of the ground over the past ten years, Lodi's heritage grape is still finding a home in wineries that specialize in the grape as a premium red varietal, and is also still valued as a component in red wine blends (a role that Petite Sirah also plays), which have been increasing in popularity.

Our final visual, giving a good idea of the role Lodi plays as a supplier of grapes going into the wines that America and the entire world currently love to drink the most. 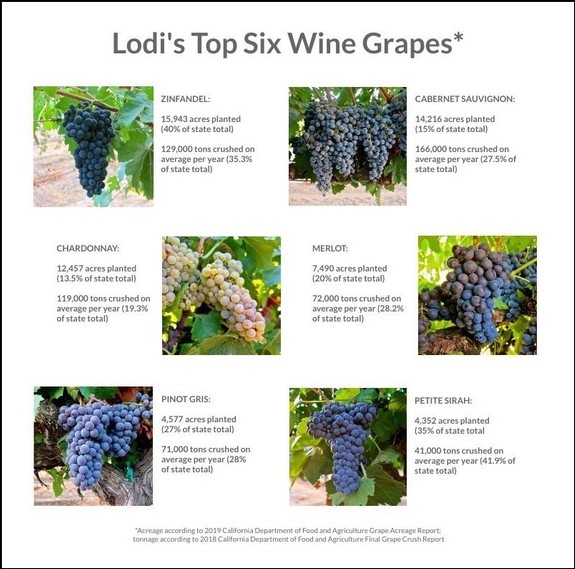