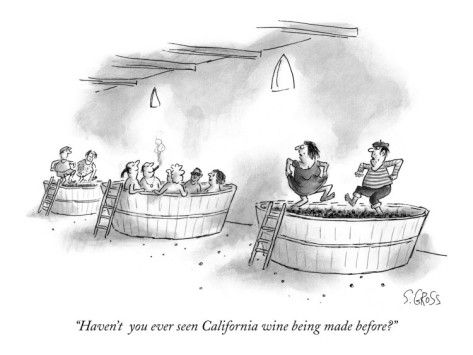 Can wine appreciation be funny? You would think not, going by the seriousness of the overwhelming number of wine scribes scratching away on their online blogs or in all the lifestyle magazines or catalogue-like, numerical wine reviews.

But when you think about it, wine should be the funniest thing out there. Especially since wine is a social drink, and it has alcohol. It stimulates conversation, and makes people feel like they're a lot smarter or wittier than they actually are. Theoretically, rife for humor. 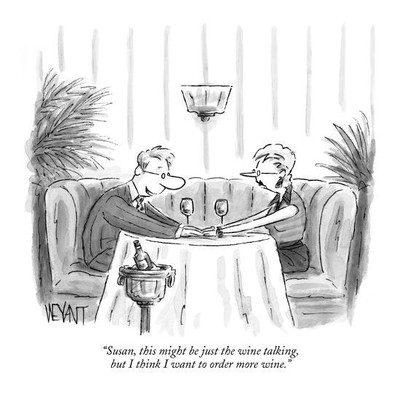 Take movies centered on wine. "Sideways" had some really funny moments ("Are you chewing gum?"), and some tender ones ("I like to think about the life of wine"), although it may have gone, well, sideways once the brutal, slobbering, uncomfortably pitiful parts ensued. Just like life, I guess, but not something you want to relive, or watch over and over again. Other movies with a focus on wine and possibilities for humor have, instead, ended up being insufferably boorish ("Bottle Shock"), sappy ("A Walk In the Clouds"), or just plain improbable ("A Good Year"... Russell Crowe, the "Gladiator," the sensitive owner of a French château?).

I oh-so-wanted last year's "Wine Country" to be hilarious because it starred some of my favorite female comedians; but alas, to describe it as an hour and 45 minutes of endlessly flat jokes is to be kind. A movie that literally drives you to drink.

From the movie "Sideways"

Years ago — for me, going back 30, 40 years — we'd get a sense of wine's droll yet perpetually unfulfilled potential for humor through literary works. In Julian Street's Table Topics, for instance, you can read about an old fashioned French oenophile:

An old French gentleman, a great gourmet, was preaching the gospel of the grape to an American. "Wine is the only safe and sanitary beverage," he declared. "Look at me. At the age of eighty-seven I am in perfect health. And why? Because water has never touched my lips."

"You mean that literally?"

"What about brushing your teeth?"

"For that," replied the old gentleman blandly, "I use a very light, dry wine." 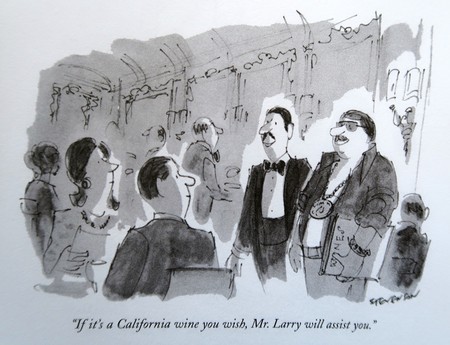 A gourmet ordered with dinner in a restaurant a bottle of magnificent old vintage Burgundy. the waiter who brought it handled the bottle carelessly.

"Look here," exclaimed the gourmet, "you haven't shaken that bottle, have you?"

And that's as "funny" as wine used to get. 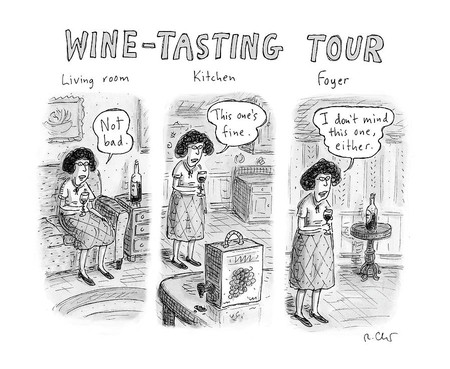 People who talk seriously about wine, of course, are intrinsically funny, even if they have no idea they are. Derek Cooper, a British journalist, once wryly commented on wine terminology:

You can talk about wine as if it were a bunch of flowers (fragrant, heavily perfumed); a packet of razor blades (steely); a laborer (robust, powerful); a troupe of acrobats (elegant and well balanced); a successful industrialist (distinguished and rich); a virgin in a bordello (immature and giving promise of pleasure to come); Brighton beach (clean and pebbly); even a potato (earthy) or a Christmas pudding (plump, sweet and round). 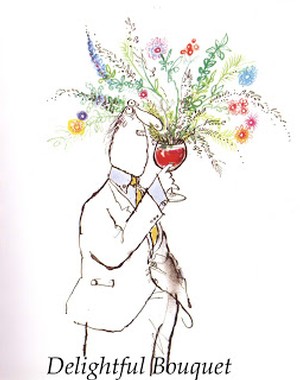 From Ronald Searle's The Illustrated Winespeak

I have enjoyed Bouquet by G.B. Stern, a literary critic who wrote about a 1926 tour of Southern France with her husband; particularly a scene that reminds me of many an idle conversation over glasses of wine with family and friends:

We dined at Saint-Remy, on the open veranda over the garden, and drank a Châteauneuf-du-Pape which tasted like nice chewed grass. This was Rosemary's definition, and Johnny and Humphrey said she was right. Personally, I found as little suggestion of chewed grass, even of nice chewed grass, as I had found of rose-petals in Tavel, or of gun-flint in Saint Péray. By this time I was growing humble about my indiscriminating olfactory nerves, and content to accept the verdicts of my friends. 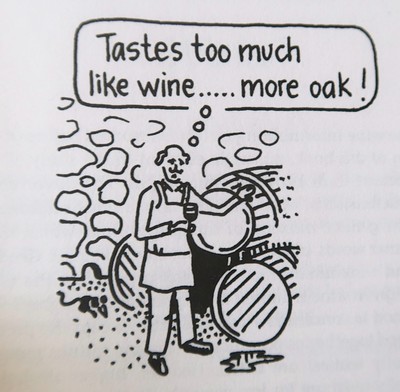 I could go on and on about the wine world's droll — that is to say, very dry without being sharp or mushy (it's movies that tend to make wine mushy) — sense of humor, but would prefer to save space for a classic tale once spun by the beloved, Pulitzer Prize-winning columnist at The Washington Post, Art Buchwald. Just the idea of an American humorist — a high school dropout who was raised in foster homes in New York, before breaking into journalism by dint of a college degree courtesy of the G.I Bill — tasting through the hallowed, great châteaux of Bordeaux would seem unlikely to the legions of readers of Buchwald's nationally syndicated columns. But it happened, and his words — worthy of Supreme Court candidates at Senate hearings for their art of nothingness — are worth savoring, even after 60 years:

"There are not in this world any lords of higher lineage than the great wines of Médoc, which form the first nobility of the vintages of France, whether they be Margaux, Saint-Julien, Saint-Estèphe, Pauillac, or Moulis. They rival each other in their incomparable elegance and in their rich, ruby-red color." 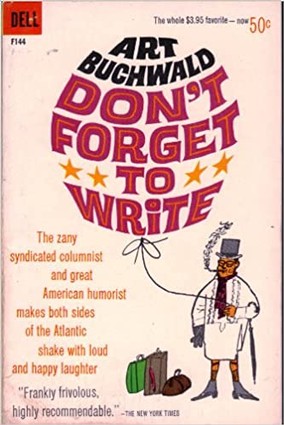 This is what they would have told you if you had gone to Bordeaux for the harvesting of the 1959 grapes. As a guest of Alexis Lichine, proprietor of Château Prieuré-Lichine and Lascombes, I spent a few days in the Médoc, watching one of the great vintages being brought in. The sight was one to make the heart beat faster. The dry French summer and fall, which had played havoc with vegetables and dairy products, had been a boon to the grapes. Not only was it a great year in quality, but in quantity as well.

In one of those inexplicable French economic explanations we were told that the price of wine would not go down because it had been a very successful year. The previous years, 1956, 1957, 1958, were bitter and cold years for the wine growers, and very little wine was made. The shortage sent the price up. this is reasonable. But last year, with wine in quantity, the price still went up.

I made the mistake of asking one of the growers why.

"Because," he said, as if talking to a child, "it is a great year and everybody wants it."

So much for the economics of wine.

M. Lichine promised to take me on a tour of the Médoc and we started, quite naturally, with his own Château Lascombes. He told me that in the course of the tour I would be asked to taste some wines and he didn't want me to disgrace him.

I practiced by tasting some wine from one of his vats. It tasted good, and I swallowed it.

"Clockwise. Counterclockwise is for Burgundy. And then spit it on the floor."

I practiced a few times until I got it right.

"Now say something," he said.

"it sure puckers the inside of your mouth." 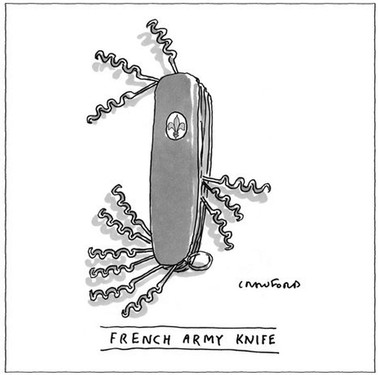 "Okay, but it still puckers the inside of your mouth."

Our first stop was Château Margaux, one of the four greatest wine châteaux in France. We visited the chai, the long shed where the grapes are put in vats and barrels. The master of the chai asked me if I wanted to taste some. I nodded, and he gave me a glass.

I swished it around and spat it out. Lichine looked pleased at his pupil. "It has a texture all its own," I said. "It tastes like cotton."

Lichine kicked me in the leg. "What he means," he said to the master, "is that it tastes like velvet."

After we were shown around the Château (I discovered that no one in Bordeaux presses wine in their bare feet any more) Lichine took me to the Château Latour, another of the four greatest vineyards in France.

I tasted the Latour wine and said, "A great wine. It has such a rich, soft flavor."

"Could I have some water?" I asked of the owner, Count Hubert de Beaumont.

"Water?" The count looked puzzled. "Do you want to wash your hands?"

Before I could say I wanted to drink the water, Lichine dragged me away.

"Never, never, never ask for water in Bordeaux," he admonished me.

"But I tell you my mouth is all pucked up. My cheeks are stuck to my teeth."

Lichine would have none of it. The last château we visited belonged to Philippe de Rothschild, owner of the Mouton-Rothschild vineyards. M. Rothschild, a gracious host, showed us through his caves and invited us to have a glass of champagne with him in his house, one of the most beautiful in France.

We went upstairs and a servant served us each a bubbling glass. Lichine toasted his host and we sipped some. Then as Lichine looked on in horror, I swished it around my mouth.

But it was too late. I spat it on the floor.