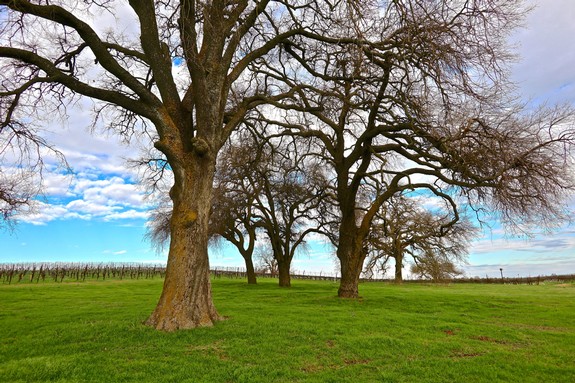 The natural, verdant oak savanna now planted with vineyards throughout Lodi's Clements Hills AVA — a far cry from the more arid landscapes of the southern half of California's Central Valley

Is the Lodi Viticultural Area (i.e., AVA) a Central Valley wine region? Geographically, yes, in the same way that San Francisco is a city in California, and the same for the City of Lodi.

All the same, when you say the name "Central Valley," you are usually suggesting a flat, arid, desert-like area, even if much of the Central Valley between Stockton and Bakersfield is sufficiently irrigated to support one of the world's largest agricultural regions.

When the first settlers of European descent arrived to farm and settle in what was once known as the Mokelumne area (changed to Lodi in 1873), what they found was not parched desert sands, cactus and cowhorned skulls. Instead, they found a verdant oak savanna fed by teeming river waters rushing down from the Sierra Nevada and into the Sacramento-San Joaquin River Delta, which empties out into San Francisco Bay.

The boundaries of the Lodi AVA (left) juxtaposed with the rivers of the Mokelumne watershed. Lodi AVA map courtesy of Society of Wine Educators.

Mokelumne, in fact, is derived from the native Plains Miwok words for "fishnet" (moke) and "people of" (umne) — basically meaning, "people of the river." To the immediate west, the Delta region, which is now almost entirely below sea level thanks to a complex system of levees, constitutes the only break in the entire California Coast Ranges — this water and wind gap exerting an enormous impact on the climate of the Mokelumne River watershed.

California's Central Valley is actually a humongous, 450-mile-long basin that was once an inland sea, seemingly carved into the center of the state of California like a canoe from a tree, as you can see in this 1944 relief map designed by Muir Way: 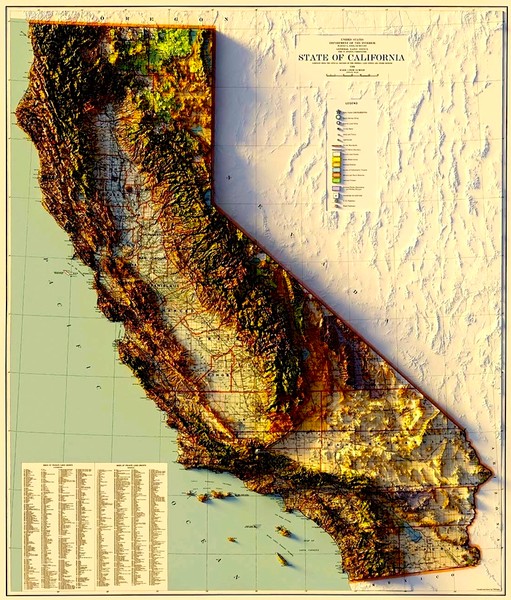 Politically, the Central Valley encompasses 19 California counties, stretching from Redding in Shasta County to the north to Bakersfield in Kern County in the south. The Lodi AVA is located in parts of two of those counties — the northern half of San Joaquin County and a good chunk of the southern end of Sacramento County. Lodi-grown wines, as a matter of fact, could be bottled as either San Joaquin County or Sacramento County wines, although county identifications are rarely used on labels (almost all Lodi-grown wines are bottled either as "Lodi" or "California" wines).

However much you can say that Lodi is a Central Valley region, wine regions, or appellations, all around the world are simply not easy to summarize by simply citing broad geographical terms. Like the Central Valley, for instance, California's key coastal winegrowing regions stretch approximately 450 miles north to south, from Mendocino to Santa Barbara, with regions like Sonoma County, Napa Valley, Livermore Valley, Santa Cruz Mountains, and all the parts of Monterey and San Luis Obispo counties in between.

It would be incorrect, however, to say that Santa Cruz Mountains is pretty much the same kind of winegrowing region as Santa Barbara, Mendocino, Napa Valley or Sonoma County, even though they are all located along the California coast. There are, if anything, more differences than similarities distinguishing each of these regions, which makes them all the more interesting.

It would be the same if you suggested that all the appellations of Southern France (Languedoc-Roussillon, Provence, Saint-Chinian, Picpoul de Pinet, Bandol, etc.) were all pretty much the same because they are "Southern French." Or if you grouped all the Northern Italian regions (Piemonte, Trentino-Alto Adige, Veneto, etc.) as being synonymous — a nonsensical notion, especially since all these wine regions (as they do in Southern France) grow different grapes and produce wines unique unto themselves.

Hence, the basic fallacy of equating Lodi with "Central Valley." Let's discuss why that is, based upon the primary way that broader wine regions are distinguished: by climatic distinctions. 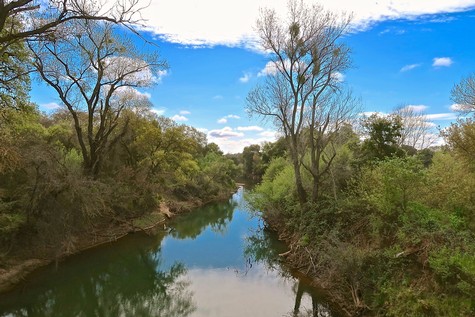 Although it is just one of several ways in which climatic distinctions between regions are made, during the 1940s U.C. Davis's A.J. Winkler and Maynard Amerine devised a system of classifying climatic regions based upon the premise that grapevines are not active at temperatures below 50° F. (10° C.). Each day during the growing season — April 1 through October 31 in the Northern Hemisphere — is assigned growing degree-days according to the amount that the day's average temperature exceeds 50° F. All the days during the growing season are added up, with the sum total used to determine a region's climate classification.

Hence, in what is now also called the Winkler index, wine regions are classified according to the total number of degree-days in the following way, from the coolest climate regions to the warmest:

To give you an idea of how much California's key winegrowing regions can vary climatically, this is a snapshot of growing-degrees and Winkler Region classifications, listing examples of the coolest climates to the warmest:

Two conclusions that can be drawn from this summary:

• Although they are all coastal regions, Santa Barbara's Santa Maria Valley is considerably cooler, on average, than coastal regions such as in Mendocino and the centers of Napa Valley and Sonoma County. Although all these regions grow grapes like Chardonnay, Pinot noir and Cabernet Sauvignon, the sensory qualities resulting from these varying climates produce wines that are so different, they almost taste like they are made from different grapes.

• The regions to which Lodi is most similar, and thus classified as Region IV, are towards the center of Napa Valley (near St. Helena) and the eastern edge of Sonoma County (close to Healdsburg). In fact, Lodi is much more similar to the Region III areas of Mendocino and Sonoma Valley (less than 680 degree-days in average difference) than to the far warmer Region V areas in Fresno and Kern counties (average differences of 819 to 1,219 degree-days). This is why it is generally inaccurate to group Lodi as a "Central Valley" region — simply because all the grape growing regions south of Stockton are considerably warmer than Lodi. 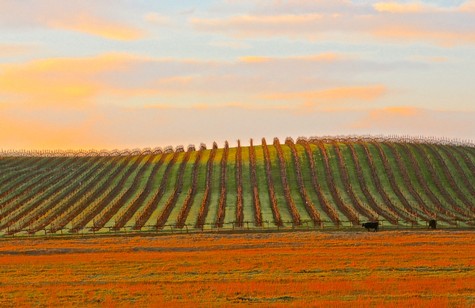 Another way to look at climatic differences in terms of temperatures is by diurnal swings: the differences between night-time lows and day-time highs throughout the growing season (mid-March through end-of-October). The reason why this is important is that wine grapes benefit from cool night-time temperatures because it allows vines to "rest," so to speak, and ultimately help grapes retain the acidity that is necessary to produce wines that taste fresh and well balanced.

Here is a snapshot utilizing data collected over the past 120 years, comparing key California wine regions: 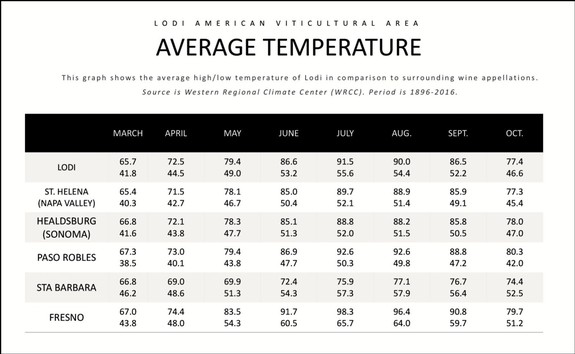 • Lodi is most similar to Napa Valley and Healdsburg, even though in peak summer months (mid-June through mid-September) it is 1° to 2° warmer on average during the day as well as night. However, the coolest wine region in this comparison (Santa Barbara) generally has much narrower diurnal temperature swings that Lodi, Napa Valley and Sonoma — manifested by nights that are 2° to 5° warmer, yet day temperatures that are 10° to 15° cooler than any of these regions. Ergo, the climates of each of these maritime-influenced regions are similar in terms of all of them having diurnal swings impacting quality of grapes, yet different in terms of actual range of the temperature swings, resulting in wines with different sensory qualities.

• The outlier in this comparison is Fresno County, which fall more in the "Central Valley" pattern of having warmer average temperatures during both days and nights — a good 7° to 10° warmer than Lodi during the peak summer months. You can still grown wine grapes in Fresno and counties south of it, but the warmer climate means grapes and resulting wines do not retain the crispness and freshness more easily grown in regions like Santa Barbara, Sonoma County, Napa Valley or Lodi. 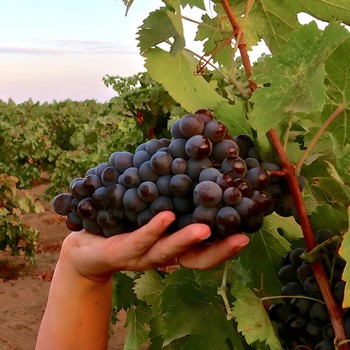 For most of the past 100 years, by the California Field Office of the U.S. Department of Agriculture (i.e., USDA) has defined California's winegrowing regions by pretty much political, largely county-defined boundaries, despite the fact that the Lodi AVA — the boundaries of which are pretty much aligned with District 11 — straddles both San Joaquin County and Sacramento County.

To give you a good idea of the full extent of the state's winegrowing regions, this is the USDA's map of the 17 California Grape Pricing Districts, which exist primarily for annual reporting purposes (particularly, grape tonnage and grape acreage totals): 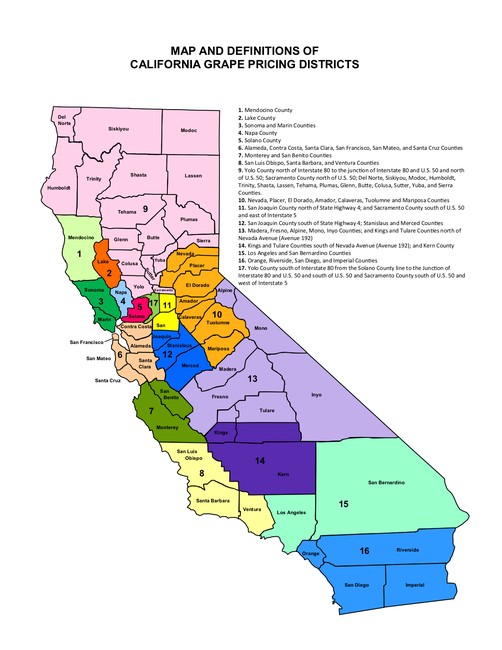 These Districts, of course, are not to be confused with regions defined as American Viticultural Areas (AVAs) by the U.S. Department of Treasury's Alcohol and Tobacco Tax and Trade Bureau (i.e., TTB). The cool thing about AVAs is that, when determining these areas, at least the federal government gave serious consideration to each proposed AVA's commonalities such as climate, topography, soil, historical precedence, etc., while allowing for variations within each AVA, similar to what is done in the appellation systems of Europe.

Actual wine-related considerations, however, were never really factors in the USDA's division of Districts; which is why, for example, there can be a District 8, which includes hugely varying wine regions such as San Luis Obispo (within which you find sub-AVAs such as Paso Robles, Edna Valley and Arroyo Grande Valley), Santa Barbara County (which contains 6 distinct AVAs) and Ventura County. 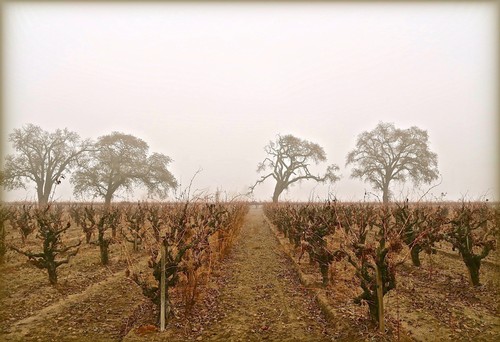 Still one more way to grasp Lodi’s climate is through the lens of Sunset Magazine — the self-described “Guide to Living in the West.” This magazine has always furnished highly detailed, time honored advice on how to garden in the Western U.S., based upon all the known variables pertaining to length of growing season, timing and amount of rainfall, winter lows, summer highs, wind, humidity, latitude, altitude, and so forth.

Therefore we also find it interesting that out of the 20-plus specific climatic zones into which California is divided by Sunset’s professional gardeners (please visit Sunset Climate Zones online), Lodi is fixed squarely in Zone 14. According to Sunset, Zone 14 encompasses “inland” areas moderated by “marine air” — especially those influenced by the “opening in Northern California’s Coast Ranges created by San Francisco and San Pablo bays.” A broad look at these climate zones: 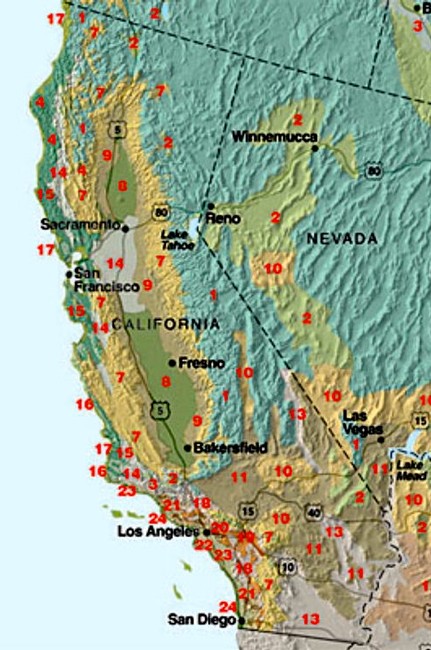 The moderating marine effect characterizing Sunset's Zone 14, of course, entails all the areas falling within the sphere of influence of the Sacramento-San Joaquin River Delta and its famously consistent "Delta breeze." This would include Lodi as well as the farmlands and neighborhoods between Pittsburg, Sacramento and Stockton — the latter three, grown into sizeable seaport municipalities due to their access to river channels wide and deep enough for seagoing vessels.

Sunset's marine-influenced Zone 14 areas also include Napa Valley between the cities of Napa and Calistoga; the valley areas running through Sonoma, Santa Rosa and Healdsburg; in Mendocino, most of the areas near Ukiah and east of Boonville; and in the Central Coast of California, the hills around Paso Robles, the Salinas Valley south of Soledad, and most of the areas near Santa Barbara County’s Santa Ynez and Solvang. 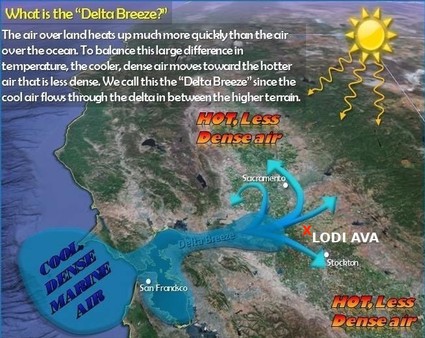 The Central Valley areas south of Stockton, on the other hand, are classified by Sunset as Zones 8 and 9, and are regarded as decidedly warmer thermal belts which are also prone to cold winter temperatures. The essential difference between these areas and Zone 14 is, according to Sunset, a low degree of marine influence.

If there is any conclusion to make from these different ways of comparing climates, it's that Lodi, if anything, is far more similar to the coastal regions of California than to the warmer areas of San Joaquin Valley, occupying the southern half of the Central Valley. 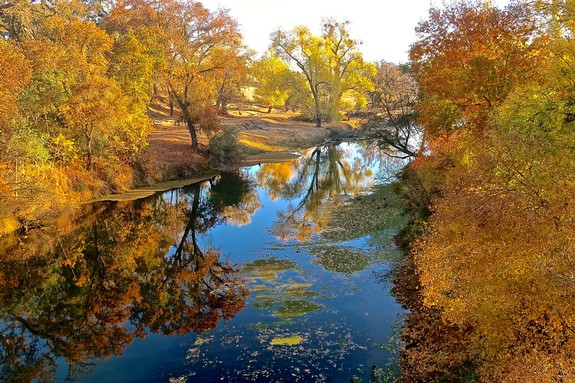 The Mokelumne River where it winds through Lodi's Clements Hills AVA