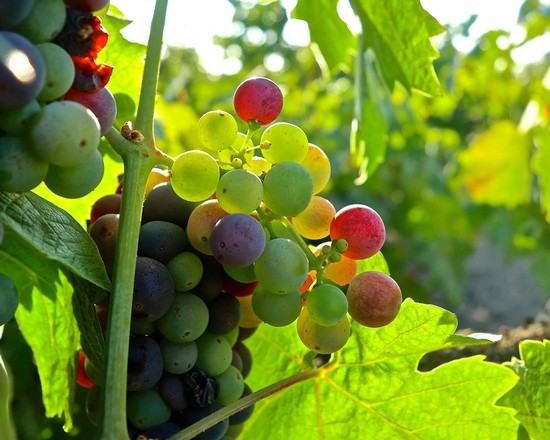 It's that time of year again, here in mid-July. Red wine grapes are in the midst of exchanging their green skin colors for coats of red, blue, purple, black, and all the shades in between. This stage of a wine grape's development is called veraison, from the French word véraison (simply meaning "change of color").

Veraison is also a signal that a grapevine is half-way through the process of yielding fully ripened grapes. Once red wine grapes turn color, they are usually picked within the next 40 to 50 days. 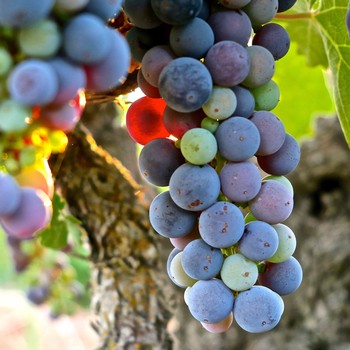 Last week we spent two days in the coastal regions of Mendocino and Sonoma counties with winemaker Greg La Follette, who currently produces wines under his Marchelle Wines label (including a Zinfandel, Cinsaut and Carignan from Lodi old vines). Out on California's far western coast, red wine grapes are still about a couple of weeks from veraison because vineyards in those regions bud out and bloom a little later than in Lodi. But looking at vines during the second week of July gave us a good opportunity to chat about the seasonal development of grapes. 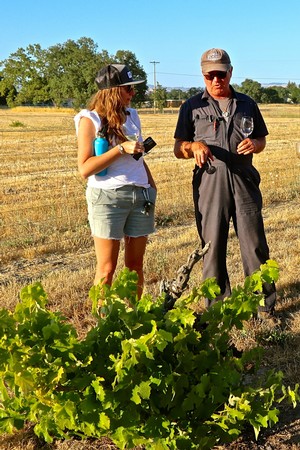 While walking through vines bearing beaded, green clusters and canes still growing in length, leaves and tendrils, La Follette commented, "Grapevines at this stage are still in their vegetative stage. Instinctively, each vine is trying to outclimb its neighbor, competing for sunlight and more energy. If they were in the wild, they would essentially be trying to grab more territory, which is one way that a vine can propagate." Left unchecked in the wild or a backyard, in fact, an unpruned grapevine can simply send its shoots into the ground to root and create new plants. 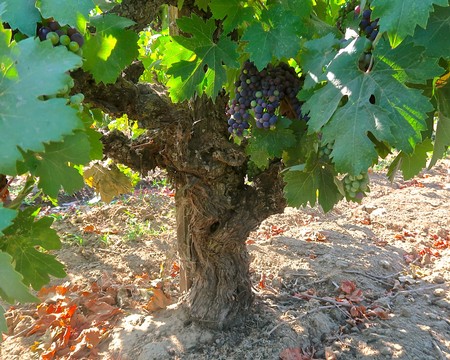 "But the normal behavior of a grapevine," says La Follette," is resort to a reproductive strategy, in order to be more fruitful and multiply. It's like vines starting to say to each other, 'Guys, things are getting pretty tough around here and we’re not going to be able to do much more of this lumber production, so let's start using what little resources we have left to start making our fruit a lot more attractive for the birds [more colorful and sweeter] so that they will come and grab our seeds.'"

The advantages of birds eating grapevine berries, of course, is that they'll also disperse the seeds hither and yon, enhancing grapevines' ability to spread over wider ranges. As Charles Darwin wrote in his groundbreaking On the Origin of Species: “[fruits’] beauty serves merely as a guide to birds and beasts in order that the fruit may be devoured and the manured seeds disseminated.” 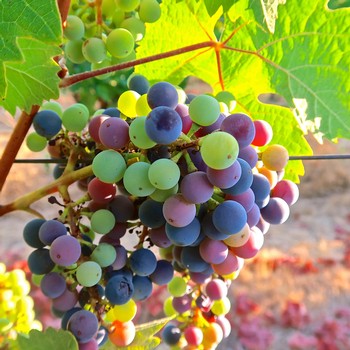 Technically, the colorful stage of veraison is the outward sign of berry cell expansion in berries. From this point on, the grapevine begins to direct the energy accumulated through photosynthesis activity in the leaves to an accumulation of sugars, proteins, phenolic content (i.e., anthocyanin and tannin), and flavor and aroma compounds in the grapes. Grape acids also become metabolized following veraison, and pH (i.e., measurement of strength of acidity) slowly rises as sugar content increases. 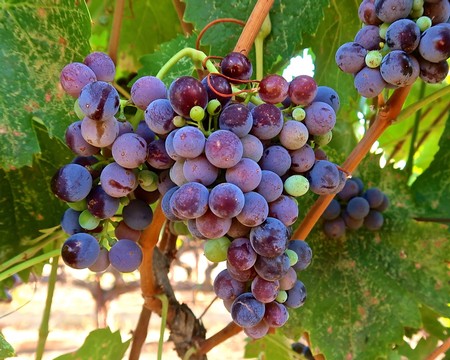 Also at this stage, compounds in grapes such as methoxypyrazine, which give green, vegetal flavors, start to decrease, and components like monoterpenes which give many wine grapes flowery aromas begin to increase. The fruit, in other words, starts to become attractive to not only birds and other wild animals (bears and deer, for instance, love to make picnics out of ripening grapes in vineyards), but it also draws intense interest from one of the animal kingdom's more interesting species: winemakers. 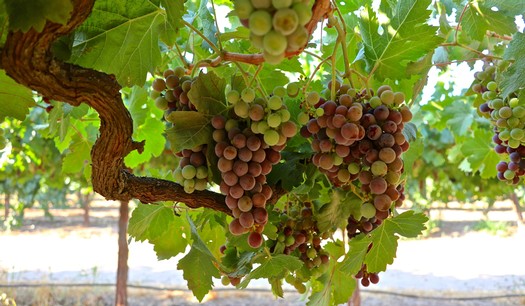 Merlot under a split-canopy shifting into veraison colors on the west side of Lodi's Mokelumne River AVA.

"Have you heard about the winemaker who died and went to heaven?" asked La Follette. "I haven't either," he answered himself. Actually, that sounded more like a lawyer joke. Ah, but winemakers certainly come in handy. While grapevines certainly did just fine for thousands of years before humans with ulterior motives came along to begin domesticating choice variants of the Vitis family, it's the conscious decisions of both viticulturists and vintners that have been giving us better and better wines. Glory be.

A colorful, and promising, time of year indeed. 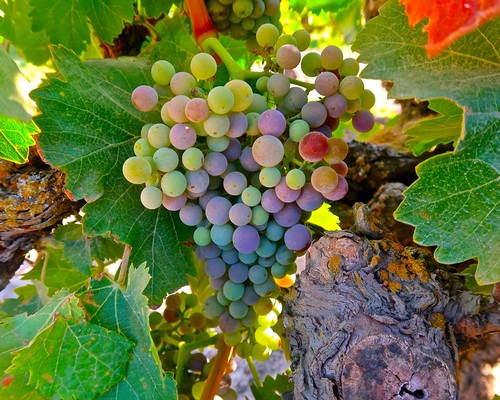