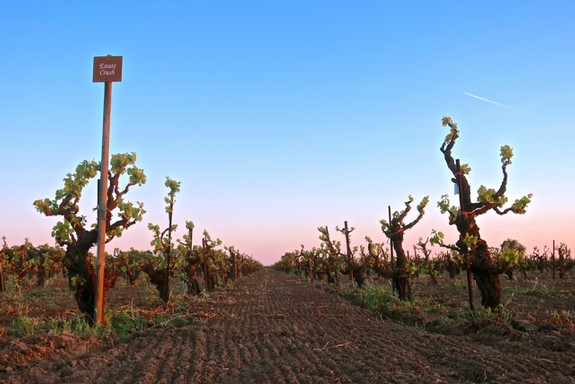 How do you describe the latest wine produced by Lodi’s Estate Crush, Downtown Lodi’s custom crush facility (serving over 60 winery/clients, on top of wines sold under its own brand)? The 2018 Estate Crush Lodi “Carbonated” Cinsault Rosé ($26) is so many things that it is practically “ironic,” as Alanis Morissette once sang, citing a slew of things that can go wrong, and often do go wrong, in our workaday-to-wonderful lives.’’

The wine itself is unabashedly spritzy and positively exudes strawberry/cranberryish fruit in a perfume of remarkably fruit centered purity and in its light, razor-sharp and zesty-prickling sensations, bracing the palate with just a whisper of residual sugar (barely half a gram). 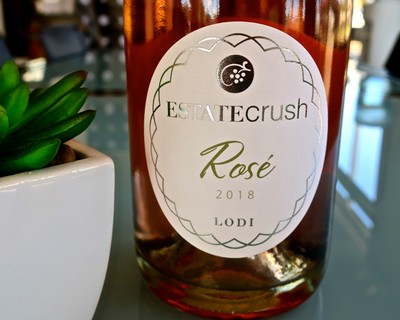 There is definitely a light, breezy, almost frivolous quality to the wine; yet at the same time, there is an authentic feel to its transparency. It’s like the wine is saying: I’m pink and I’m pretty, and lots of fun, but this is a product of a lot of hard won work – in fact, you won’t find anything like me anywhere else in the world!

In fact, 100% of this sparkly, salmon-pink wine comes from a Lodi AVA vineyard that has lived the most ironic of lives, spanning 133 years. That’s one hundred and thirty three years! It’s called Bechthold Vineyard, and it is the world’s oldest continuously cultivated planting of Cinsaut (a.k.a. Cinsault), originally planted on its own roots by Joseph Spenker in 1886, and totals 25 acres.

Here’s the story: During most of this vineyard’s first 100 years, hardly anyone wanted these Cinsaut grapes. A big reason was because it was originally planted under one of the grape’s nineteenth century synonyms, Black Malvoisie. The receipt confirming delivery of the original cuttings, which came from El Pinal Winery’s nursery in Stockton, actually read “Black Malvoisier.” 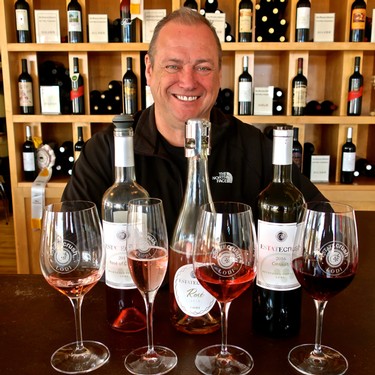 By the 1990s, in many years the farming of this obscure "Black Malvoisie" grape was costing Al Bechthold (who passed away in 2014) and Wanda Woock Bechthold (Wanda is the great granddaughter of Joseph Spenker) more than what they were getting for the grapes, which at the time were being packed in lug boxes and sold primarily to home winemakers across the country. The Bechtholds were ready to throw in the towel and pull up the entire vineyard.

But lo and behold, in 2004 a U.C. Davis professor/winery consultant confirmed that all 25 acres of the vineyard were planted to Cinsaut, one of the major black skinned grapes of Southern France which was (and still is) in great demand in California. Overnight, Bechthold Vineyard became “famous” – the “latest sensation” – with about a dozen top wineries (Lodi based as well as outside the Lodi region) standing in line to pay about 10 times more for the grapes than what Al and Wanda were getting for them, just 20 years ago. The California State Fair judging committee named Bechthold Vineyard California’s “Vineyard of the Year” in 2014. Isn’t it ironic?

All the same, consider the fact that Bechthold is now one of California’s most revered vineyards – Bechthold Vineyard Cinsauts are now served in Michelin starred restaurants from the West Coast to Chicago, New York and Atlanta – and yet the average retail price of these wines is still under $30. The vineyard is so universally acclaimed by winemakers, critics and consumers alike (re the most recent San Francisco Chronicle article on The world’s oldest planting of Cinsaut), you would think that people would be willing to pay $100 or $200 for such rarities. 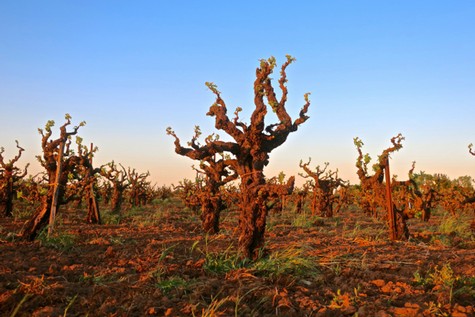 The south end of Bechthold Vineyard near the canal, where larger vines produce Cinsaut fruit more ideal for rosé production

Another irony about Bechthold? The fact that these ancient vines produce both red wines and dry rosés that are very much “Cinsaut” – an essence of the grape with a twist of terroir (i.e. a “sense of place” pointing specifically at Lodi’s Mokelumne River appellation). Bechthold Vineyard reds are soft, round and accessible in its teeming fruit qualities, which typically suggest a strawberry freshness with rhubarb-like zestiness, often mingling with notable spice (particularly clove and black pepper) and a faint, loamy earthiness typical of west side Mokelumne River grown wines. The dry rosés exude the same fruit qualities, only with crisp, silken, seamless sensations suggesting minerals and spice.

The reason the vineyard lends itself well to both reds and pinks is because there is a canal – almost always brimming with chilly waters diverted from the Mokelumne River, originating from the high Sierra Nevada to the east – that skirts the property’s south side. The vines’ roots closest to the canal have always had easier access to water – the plants on the south end have grown to be slightly larger, yielding slightly lighter colored berries than the clusters produced by the smaller vines further from the canal – and subsequently, have always been more suitable to rosés than to reds. Whether red or pink, all wines coming out of Bechthold are usually phenomenal. 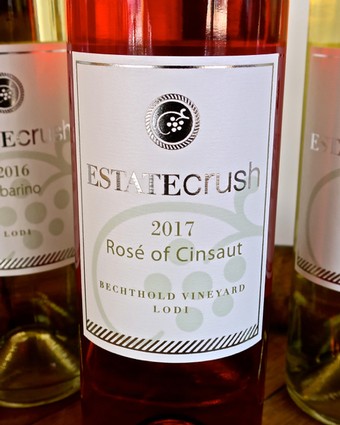 Besides their new carbonated style of Bechthold Vineyard Cinsaut, Estate Crush produces classic styles of both a dry rosé and red wine from these ancient vines. Estate Crush co-owner Bob Colarossi tells us, “We’ve been working with Cinsaut from Bechthold since 2009. In the beginning, we produced the reds and rosés for Jillian Johnson (of Onesta Wines), and then a red for (the Clarksburg based) Miner’s Leap Winery. By 2012, we managed to snag 6 rows of Bechthold Vineyard for our own brand, Estate Crush. When I last counted, between ourselves and our clients’ wines we’ve produced 41 different lots of Bechthold Cinsaut over the past 10 vintages.”

While Bechthold Vineyard consists entirely of free-standing, spur pruned vertical cordon plants (essentially, a layered variation of the traditional head trained, or gobelet style, vines), its “rows” run north-south, and therefore about a quarter of Estate Crush’s allocated vines fall within the “rosé block” closer to the canal. 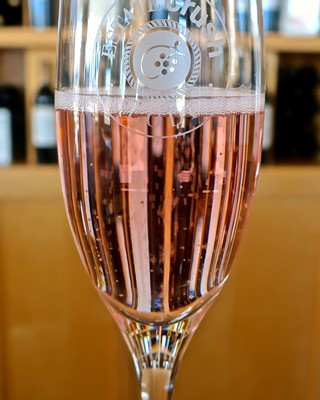 According to Mr. Colarossi, the decision in the latest vintage to compliment their rosé and red versions of Bechthold Vineyard Cinsaut with a carbonated iteration reflects a “next new thing” mentality. “When we started producing Cinsaut rosés in 2009, dry rosés were not the thing, but obviously it’s a big deal now. The idea of doing a ‘forced carbonation’ of the Cinsaut – which is different from traditional Champagne or Charmat method sparkling wines, which get their carbonation from a secondary fermentation – seemed pretty exciting because it allows us to produce the wine as a full flavored rosé, to which we add the bubbles to make the wine’s fresh fruit qualities even more attractive.”

The 2017 Estate Crush Lodi Rosé of Cinsault ($21) is the current vintage of classic, dry, still rosé coming from vines at the south end of Bechthold Vineyard: it is a brighter, more vivid pink colored wine than Estate Crush’s 2018 carbonated style Cinsaut rosé, and also dryer and fleshier – its mineral qualities holding sway over a more subtle strawberry/watermelon fruit tone.

Tasted out of the tank, the winery’s regular 2018 Cinsaut Rosé (which will be bottled later this month) has the transparent salmon-pink color of the carbonated 2018 Cinsaut Rosé (it is the exact same wine, except without the carbonation), and is showing the lifted strawberry/cherry fruit and nuanced mineral/fruit sensations found in the sparkling bottling, only softer and dryer. 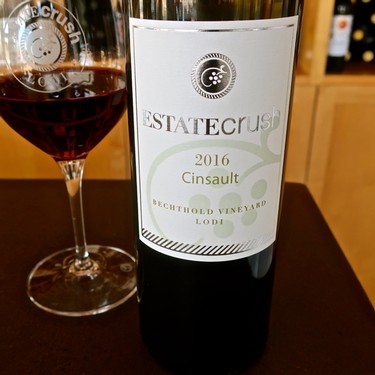 The current vintage of the red – the 2016 Estate Crush Bechthold Vineyard Lodi Cinsault ($26) – has the classic rhubarb/strawberry pie-like aroma of Bechthold grown Cinsaut, with a subtle but notable interplay of cracked blackpepper, cardomom/clove-like spice and earthy/lavender-ish qualities in the nose as well as in the wine’s rounded, soft, plump palate sensations, unencumbered by anything like oak or excessive “winemaking.”

Says Colarossi, “We take a traditional approach to our red Cinsaut – whole berry fermentation (fruit destemmed, but not crushed) preceded by 48 hours of cold soak, and strictly neutral French oak aging to play up the pure character of the grape.

“We love the story of Bechthold – its heritage, the fact that it’s Lodi’s most famous vineyard, and produces wines that are so uniquely ‘Lodi.’ This is why being able to express these grapes in three different ways is so exciting to us.” 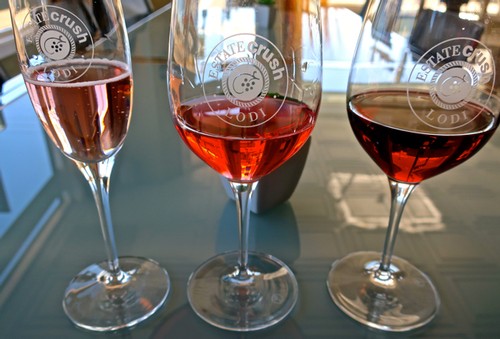