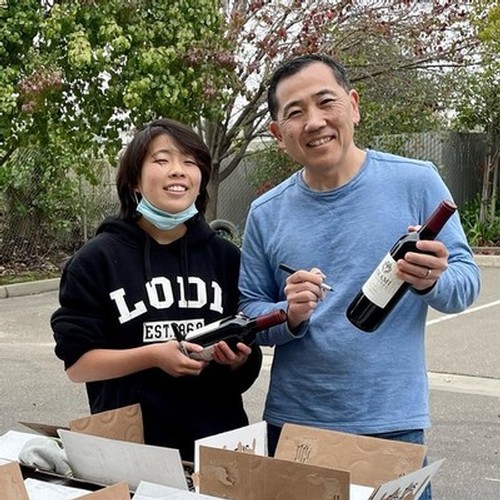 Mikami Vineyards owner/grower Jason Mikami with his daughter Kate, hand-numbering each and every one of the Mikami label bottles. Photo courtesy of Mikami Vineyards.

At this past January's San Francisco Chronicle Wine Competition, a total of 12 Lodi-grown wines were selected as Best of Class winners. "Best of Class" means exactly that: After judging all the wines, judges select their favorites in each class and price category

Petite Sirah as a varietal generally appeals to wine lovers with a penchant for big, dark, bold, and even blustery red wines. But increasingly, over the years, we have noticed that the biggest and boldest wines are not necessarily chosen as Best of Class winners. Mike Dunne — the former Sacramento Bee wine columnist who also compiles the official tasting notes for the San Francisco Chronicle Wine Competition — has made note of the fact that the 2019 Mikami Petite Sirah is "an extraordinarily sleek and lively" example of the varietal. 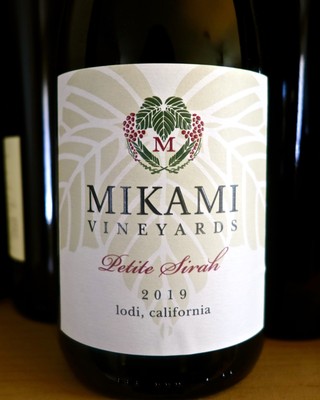 The 2019 Mikami's tannin structure is generous — Petite Sirah lovers tend to look for "big" tannins — but Dunne accurately describes it as "limber." More like the musculature of a svelte dancer than a burly offensive lineman's. Aromatically, Petite Sirahs are typically deep, particularly in blue and black berryish aromas, with a tinge of peppercorn in the nose, often amplified by strong, toasty oak qualities. The 2019 Mikami's nose mixes in additional notes of black tea and a faintly loamy earthiness with the expected spiced berry aroma, and its oak profile is faint at most (like a discreetly transparent backdrop rather than a thick, garishly carved, and varnishy frame).

It's the sense of restraint in these sensory qualities that probably appealed to the San Francisco Chronicle judges; and it's these sensory qualities that, in fact, make the Mikami Petite Sirah very much a "Lodi" style of wine — balanced, supple, not the biggest in the world, with a nose that is multifaceted rather than powerful or "hedonistic" (the latter, a favorite description among 100-point counters). 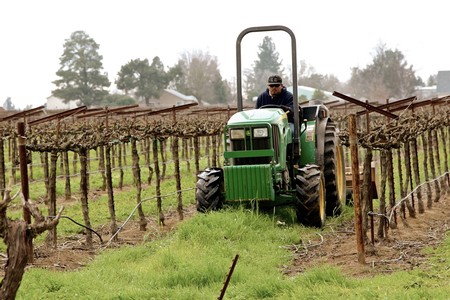 Winter mowing between rows of split-canopy Zinfandel in Mikami Vineyards.

Wine competition judges, of course, taste wines blind. For all they knew, their choice of Best of Class Petite Sirah could have come from Sonoma County, the Sierra Foothills, or Texas Hill Country (a Petite Sirah from Texas, in fact, took Best of Class in the $40-$45.99 category).

Mikami Vineyards' Petite Sirah is not just a wine to celebrate for its attributes and accolades. It is also caused to celebrate a heroic story, about a family that overcame considerable obstacles to survive and prospers as grape farmers in the Lodi region. The Mikamis' story, in fact, goes back 127 years, when the grandfather of current owner Jason Mikami arrived in Lodi from Japan to pursue the American dream of becoming an independent farmer. 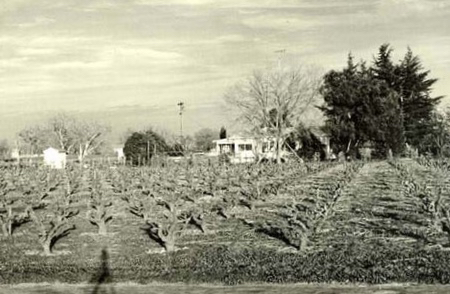 In the January 2022 issue of Wine Enthusiast Magazine, Jason Mikami is quoted in an article entitled "A Centuries-Old Law Preventing BIPOC Vineyard Ownership Still Resonates Today." Said Mikami: “Asians [were also] restricted by various laws, in particular the Alien Land Law of 1913. My grandfather was not able to own land even years after his arrival in 1895. After [World War II Japanese] Internment, my grandfather purchased a vineyard in 1949.”

Although Jason Mikami has forged a successful Bay Area career in the fields of Software Development and Cloud Storage Infrastructure, he continues to farm his family's property on Sargent Rd., in the heart of the west side of Lodi's Mokelumne River AVA. 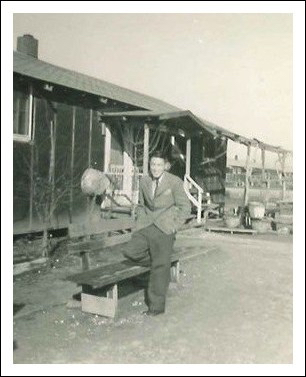 Why? Because, says Mikami, "It honors my father and grandfather who toiled in the vineyards for many years. My father single-handedly managed our 15 acres, taking care of all aspects (pruning, irrigation, fieldwork, etc.) before passing on in 2005. Unfortunately, he never saw the release of our wines [first vintage in 2008], but we continue to honor him with our efforts in the vineyard."

The Mikami family farmed Flame Tokay (starting in 1902) and Zinfandel (the latter, first planted by the Mikami's in 1923) for the exact same reason why the majority of growers farmed these two grapes in Lodi — because they are eminently suited to the region's warm Mediterranean climate and deep sandy loam soils (a soil series, as it were, officially called "Tokay fine sandy loam"). 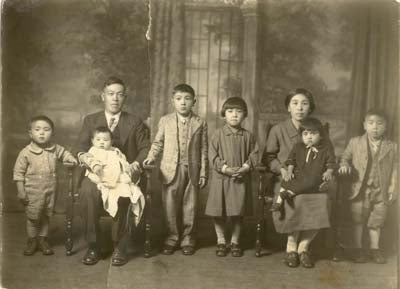 The Flame Tokay is long gone, but a small amount of Petite Sirah was added in 2005 when old head-trained vines were replaced by trellised rows of split-canopy vines, planted with 4-foot spacing, according to Mikami, "to force greater competition among the vines, helping to create more concentrated fruit."

Zinfandel remains the Mikamis' bread and butter and is a perennial gold medal winner at the San Francisco Chronicle Wine Competition. The gold medal-winning 2019 Mikami Vineyards Lodi Zinfandel ($39) is a worthy successor: an exuberant red wine with aromas that leap from the glass — peak season cherry and raspberry aromas, notes of black tea, touches of dried herbs in an earthy tone — and a silky medium-bodied feel couching an impeccable balance of tannin, acidity and bright, buoyant flavors. There is also a tinge of vanillin oak in the profile, but this is pushed far back behind the fruit and earth expressions. 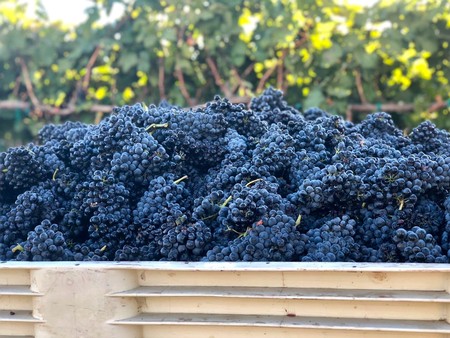 This, you can say, is what Lodi Zinfandel is all about. It's a kinder, gentler, more flowery iteration of the grape, totally avoiding the plodding, fruit-jammy weightiness almost expected out of standard varietal bottlings. Lodi old-timers will tell you it's the flowery red fruit, the touch of tea, and the faint earthiness that make Lodi Zinfandels different from any others grown in California. Francophiles would ascribe it to terroir, a "sense of place." And among the better wines of Lodi, it's reached the point where bigger is no longer considered better — it's the more "Lodi," the better.

The Mikami story is also what this wine region is all about: Generations of families sticking to the land, often more to honor their forebears rather than for the almighty buck. Perhaps even more so for the MIkamis, who couldn't even own their own land until after the Second World War. The love of the hardscrabble life of farming — the love of Lodi — will do that for you. 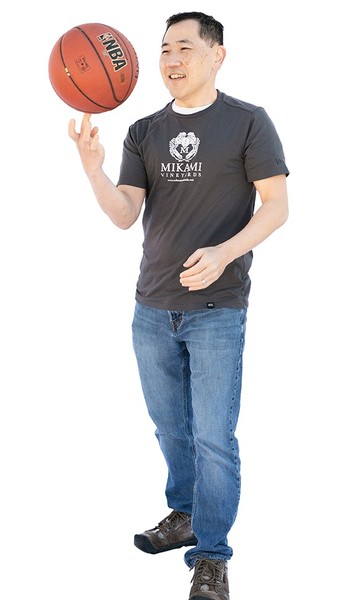 Mikami Vineyards' Jason Mikami, photographed for a Lodi Winegrape Commission profile (in which he confessed to once having a dream of being an NBA basketball player).