At bucolic Heritage Oak: the birdmen of Lodi 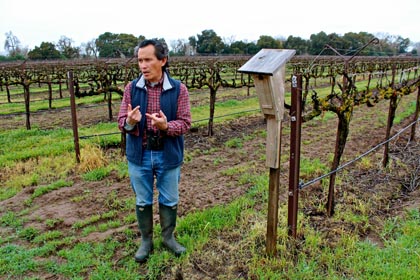 David Yee, talking about the secret life of the Western Bluebird

The vineyards belonging to Heritage Oak Winery are tucked atop a particularly bucolic bend of Mokelumne River, just east of the town of Lodi.  Out of Heritage Oak’s 186 acres, 105 is devoted to wine grapes, and the rest to fauna and flora:  a beautiful convergence of riparian woodlands and vines, teeming with life — circumstances developed by design as much as by natural extension. 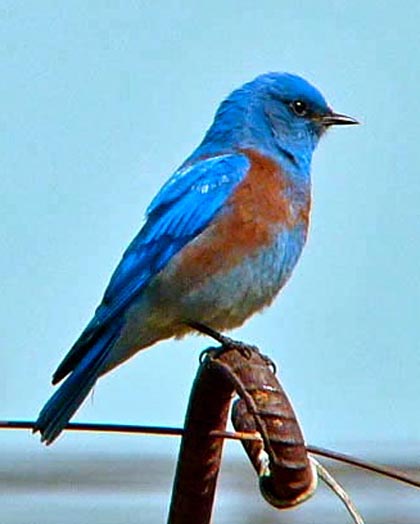 For several generations since 1868, the Hoffman family has attended to this farm with an eye on preserving the beauty of what was there before their arrival.  The property’s current custodian, winemaker/proprietor Tom Hoffman, has always harbored a special love of birds.  He talks of species like the Western Bluebird and Golden-crowned Sparrow as being “our friends… we invite them to live here because they eat insects, which helps our vineyard, and because they are beautiful.”

Heritage Oak is also unique in that several times a year they sponsor bird walks, led by David Yee, who grew up (and still lives) in nearby Morada.  Mr. Yee is San Joaquin County’s foremost bird watcher.  You could call him an ornithologist, although by trade he is a chemist in the cosmetic industry (in the seventies when he went to college, he tells us, “there weren’t a lot of career opportunities associated with ornithology”).  What matters is that his life’s all-consuming passion has been birds.

In early March 2012, on a still-chilly, grayish yet dry morning following a late winter spell of rain, Yee gathered a small group of nature and wine lovers for a walk through Heritage Oak, during which we observed and identified over 40 different species of birds.

We started by standing in one place, just outside the winery doors, besides the Hoffmans’ giant 200+ year old blue oak, prominently adorned with, of course, a Barn Owl box.  These birds are also accommodated in an old silo next to the winery because of their particularly specialized role as a vigneron’s helper:  one family of owls can consume over 2,000 mice, gophers, shrews and moles per year.

It was not exactly a quiet morning at Heritage Oak – what with with the cacophony of chirps, calls and songs coming from over a dozen different birds filling the air, encouraged by a host of different feeders installed by Mr. Hoffman.  Yee started off by telling us, “Tom Hoffman is responsible for almost single handedly bringing back the Western Bluebird to Northern Joaquin Valley, which for a while had become very rare. 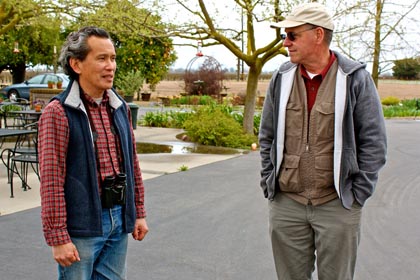 “Before starting his winery (Heritage Oak was established in 2007),” Yee says, “Tom was in the business of building birdhouses.  I didn’t meet Tom until about 1990; but about five years before I began noticing nest boxes appearing all over the county, with entry holes measuring exactly 1½ inch diameter – the perfect size for bluebirds, but too small for starlings, which had evicted bluebirds from most of the natural nesting holes, usually made by woodpeckers.  Thanks to Tom’s boxes, the Western Bluebird was able to make a comeback, and you can see them everywhere once again.” 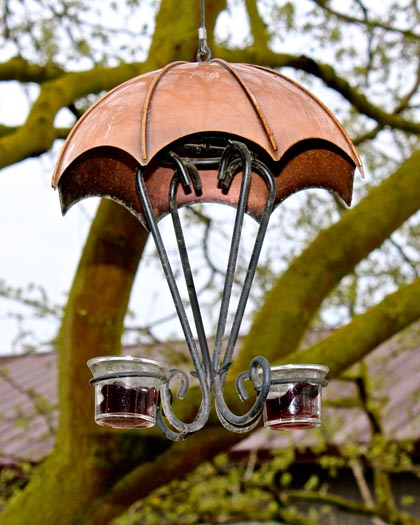 Talking about the almost frenzied bird activity around the winery, Yee explains, “at the end of winter and early spring, the songs of birds fill the air because suddenly they are hormonally driven, and ready to begin nesting.  In a matter of weeks all birds will double their weight, their feathers will color up, and they become more flamboyant, and more territorial.

“We identify many birds by their sound as much as sight.  Those loud coo-coos that you hear right now, for instance, draws our attention to Eurasian Collared Doves off in the distance, sitting on wires along the road.  These doves are non-native, originally imported from Florida.  We don’t have to see them to hear a flock of American Goldfinches in the vineyard, on the other side of the winery from us.”

We hear a fleeting buzz of a hummingbird, passing by to hover at a nectar feeder, hanging from a tree next to the Hoffmans’ home.  “That’s an Anna’s Hummingbird,” says Yee, “which stays here all winter.  So does the Black Phoebe flycatcher that we see over there.”  Swarms of smaller birds come and go between larger tray feeders, which Yee tells are House Sparrows and House Finches.  Behind the winery lies an open field of bare dirt where vines used to stand – Hoffman has recently pulled up some Chardonnay vines, and he plans to replant the area with Petite Sirah, Malbec, Chenin Blanc, Charbono and other grapes – where flocks of European Starling and blackbirds (according to Yee, Brewer’s Blackbird and Red-winged Blackbird) are pecking at the ground.

The Eurasian Collard Dove, the House Sparrow and European Starlings, according to Yee, make up the “big three” of non-natives now commonly seen in San Joaquin County.  Starlings are in the same family as Mynah birds; and so besides having a huge vocabulary, they have a knack for mimicking many other birds.  At another tray, Yee points out, is a Hooded Oriole, which he says “has probably just come back from wintering in Mexico.  Orioles are actually in the blackbird family.  They love nectar, but Tom buys grape jelly at Costco by the gallon to feed them – they’re voracious eaters.” 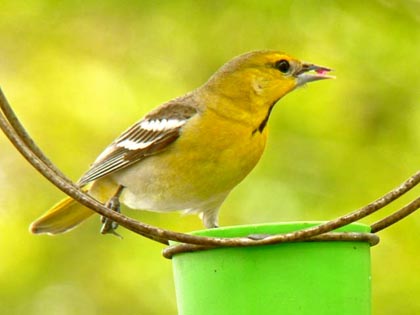 Walking us out into the vineyard, Yee points out the numerous nesting boxes Hoffman has set up at the end of the vine rows – a perfect time to talk about the sex life of the Western Bluebird.  “The Western Bluebird’s spring courtship phase is very long and drawn out,” says Yee.  “A male can expend a lot of energy, flickering back and forth, in and out of the nesting holes, to attract a female, who either shows some interest by taking a peek at the hole, or else pooh-poohs the entire idea of taking up with that male.

“If for some reason she is interested, she’ll accept the invitation to nest.  If it’s not happening – off she goes, flying away, thinking there’s plenty more where that comes from.  The behavior is very anthropomorphic – not much different than our own.  What makes a female choose one male over another?  Perhaps she rejects one because he’s not aggressive enough, or because he’s just not attractive.  It can be a mystery for birds, as much as it is for us.”

From the vineyard, we walk into the riparian woodland and wetland between the vineyards and river, occupying 50 or so acres.  “The existence of this stretch along the river is a tribute to the Hoffman family’s dedication to preserving this natural habitat of mostly native plants,” says Yee, and “a lot of that is because of Tom’s love of birds.  These paths are also what we birdwatchers call a ‘very birdy spot’ – the place to go to see rare birds, or birds that may be common in other areas but rarely seen here in Lodi.” 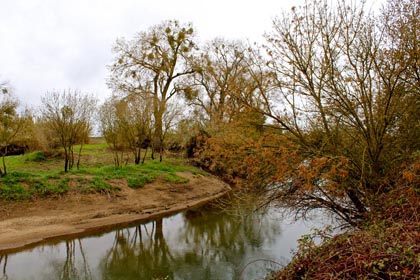 Near the river we see the head of a Great Horned Owl poking out from a large, deep nest between the limbs of a valley oak.  “The nest was originally built by Red-tailed Hawk,” says Yee, “ but it’s been used by this family of owls the past two years.”  A Great Egret forages in open grass, a Northern Flicker (the largest of woodpeckers) takes flight, and Fox Sparrows zip through the weave of willows, cottonwoods, nettles, rosehips, and Himalayan blackberry bushes (the latter a non-native, but used for pies by several generations of Hoffmans). 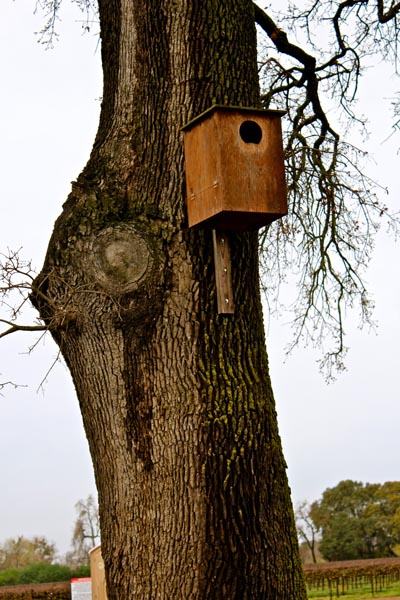 Yee adds, “not all the plants you see are indigenous, but since 2005 Tom has been making a concerted effort to replant with as much native trees, shrubs and grasses as possible.  The further along he gets with native plant restoration, the sooner we’ll see a return of native birds, like orioles, Bushtits, the American Robin…”

Following our walk, we warm ourselves up in the winery with glasses of 2008 Heritage Oak Lodi Vino Tinto ($16) – a deliciously smooth, star bright, woodsy smoke nuanced, soft and easy blend of Zinfandel, Syrah and Petite Sirah.  While Mr. Hoffman sits in front of the piano to play a selection from his favorite eighteenth century Italian composer, Domenico Scarletti, Yee talked about how he first got hooked on fine feathered friends.  “As a kid I was into star gazing; and so for Christmas in 1966, my parents gave me a telescope, which came with several guides on various subjects – one for stars, one for planets, as well as one on birds.

“I set up my new telescope at my bedroom window, and the first thing I saw when I looked through it was a bird on a tree in our yard.  I looked it up in the guide, and identified it as an Acorn Woodpecker.  It was fascinating, being able to see a bird close-up, for the very first time.  I turned my telescope towards our neighbor’s yard, and I saw a hummingbird.  Then I saw four other birds.  After that, that was it.  I never did use that telescope for star gazing – for me it was all about birds.

“When I attended Lodi High, friends would always tease me because I was never seen without my grandpa’s binoculars hanging from my neck.  We went on a field trip to Camanche Reservoir, for instance, where I saw a Bald Eagle.  Everywhere I’d go – on the Coast, or in the Sierras – I would be looking for birds, and so I had to have those binoculars ready at all times. 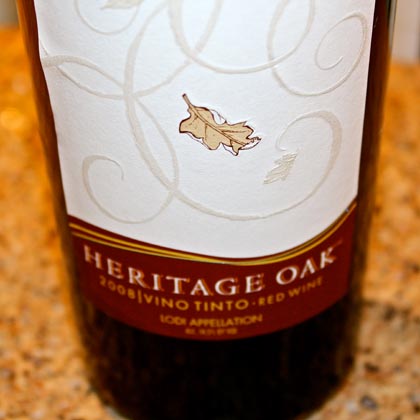 “From there I would travel all over the country to watch birds, but for the longest time I ignored San Joaquin County – until one day, in the eighties, when an ornithologist friend challenged me to rethink my approach.  I was married by then, and my wife reinforced it by saying the same thing:  instead of looking for birds everywhere else, why don’t I stay home and become an expert on birdlife here in San Joaquin County?

“So I took up that challenge, and over a two year period I managed to add over 50 new birds to the list of those seen in the Central Valley.  It’s gotten to the point where, nowadays, once I get to the county line I stop – I’m no longer looking for birds.  I’ve become provincial…”

For more information on walking Heritage Oak’s activities, please visit their page on Outdoor Activities.  Being provincial, you will find, has never been so broadening! 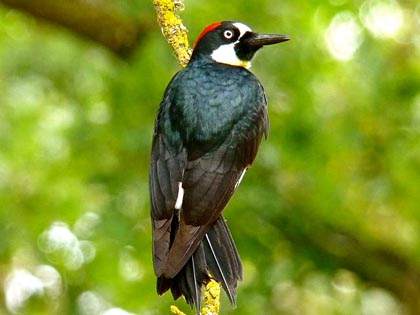