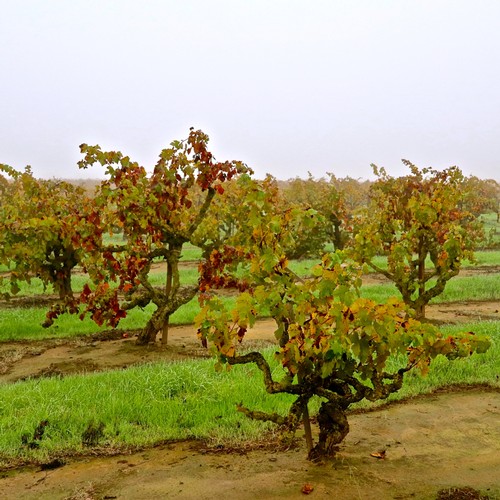 Varying colors of autumn in the Fry family's Marian's Vineyard — elongated-spurred, own-rooted head-trained Zinfandels that have seen no less than 120 yearly cycles during the course of their lives.

The trees say they're tired, they've borned too much fruit
Charmed all the wayside, there's no dispute
Now shedding leaves, they don't give a hoot
La-di-da, di-la-di-dum, 'tis Autumn

In Lodi, it is well known, grapevines can live long lives. While historic regions like Mother Lode Country in Amador County have grapevines planted as long ago as 1853, there are more vines over 50 years old in Lodi than anywhere else in the U.S. 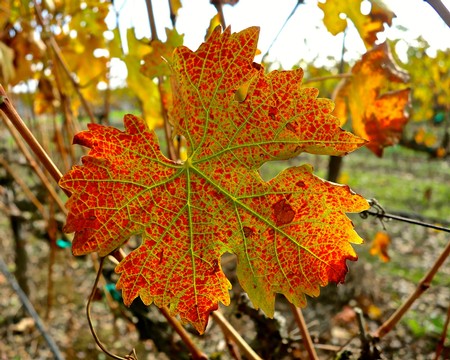 One big reason, out of several, why grapevines live so long in Lodi is the region's particular iteration of Mediterranean climate, defined by cool, wet winters and warm, dry summers. While coastal California wine regions from Santa Barbara County all the way up to Sonoma County are also defined by a Mediterranean climate, in Lodi it is even milder. Meaning no killing frosts during winter or punishingly parched summers.

For Vitis vinifera, or wine grapes, which are native to Europe's Mediterranean Basin, the absence of extreme seasonal weather makes living in Lodi for grapes almost like living in Hawaii for people. Did you know that the state with the highest average life expectancy is Hawaii? Hmmm, I wonder why... 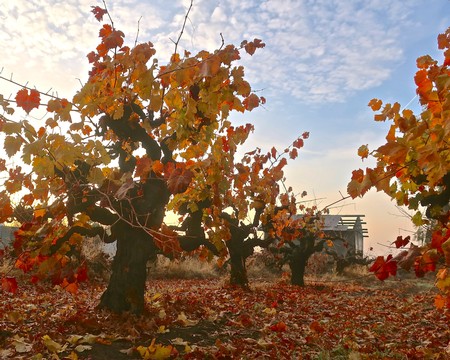 The region's location smack dab in the middle between the Sierra Nevada and the California Delta spilling out into San Francisco Bay has a lot to do with it. For instance, the chances of snow in Lodi are practically nil. It is only the old-timers who can recall the last time it snowed in Lodi: Dec. 20, 1968. The recorded low on that day was 30° — a piece of cake for folks who live in Montana, Colorado, or upstate New York — and the snow, less than half an inch, lasted just a few hours. An inch and a half of snow fell on Lodi back on January 12, 1930, but other than trace amounts recorded in 1950 and 1972, that was it for Lodi over the past century.

Otherwise, Lodi is actually approaching its coldest month of the year on average, which is December, averaging highs of 55.2°and lows of 40.8°, far above the freezing threshold (32°). Not exactly "Hawaii," but as mild as it gets for California. 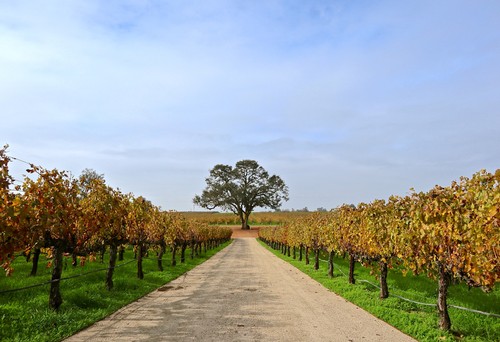 Cold enough, however, for us to enjoy something of an annual visual feast of autumnal colors on our trees and grapevines. Technically, what we see during every autumn is the leaves of flora being drained of chlorophyll, the green pigments that allow plants to absorb energy from sunlight (i.e., photosynthesis) during the growing seasons. The shorter days and nights transitioning from cool to cold temperatures are what trigger the decline of chlorophyll and subsequent bursts of colors — yellows, oranges, and reds — before leaves finally give up the ghost and fall to the wayside, forcing us to dust off our leaf blowers or thrust rakes into the hands of groaning kids. 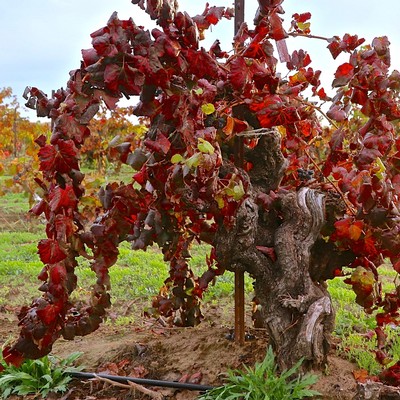 In Lodi's Rauser Vineyard (planted in 1909), close-up of the pure, blood-red colors of Alicante Bouschet, a teinturier (i.e., red pulped) cultivar that is prone to leafroll virus stunting photosynthesis even before its fruit is fully matured.

Out in the vineyards, grapevine leaves typically transition into yellow and orange hues before floating away. As you glide through the foggy mornings (unlike coastal wine regions, Lodi experiences no fog during the growing seasons — another reason why grapes luxuriate in Lodi sunlight) and gaze at the prettier vineyard blocks with their bright reddish colors, what you see are actually symptoms of plants beset with grapevine diseases, such as leafroll virus and red blotch. You'll find reddish colors in both younger vines on trellises and in older, free-standing vines held up on stakes (up until the mid-1960s, almost all the vineyards in Lodi were staked as head-trained or vertical cordon spur pruned vines). 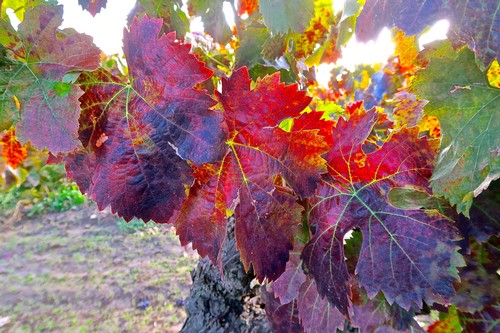 Vivid purplish-red leaves on 112-year-old Carignan in Rauser Vineyard, on the east side of Lodi's Mokelumne River AVA.

Red blotch, for one, is a disease that has been plaguing vineyards throughout California during the past 10 or 12 years. Grapevine scientists are still trying to figure out exactly what it is, and why it comes and goes or varies in proliferation from year to year, but when it occurs before grapes are fully matured it is definitely considered detrimental to the quality of fruit and, ultimately, subsequent wines. Despite their compelling colors, red blotched leaves are indicative of underperforming vines. 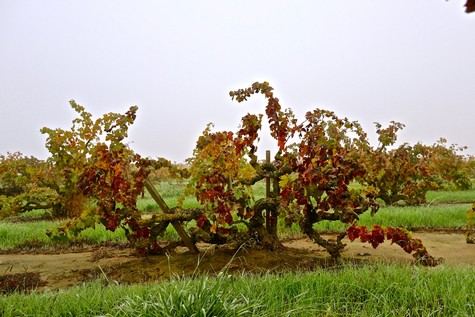 Like a hobbled, indefatigable battleship creeping out of the fog, this 120-year-old, own-rooted, productive Zinfandel in Lodi's Marian's Vineyard has, seemingly, not yet begun to fight.

All the same, it is a good time of year to drive through Lodi vineyards; and perhaps, sample the liquid wares of local wineries. Our Novembers may not be quite as spectacular as Vermont's Octobers, but wine country has its own autumnal beauty, particularly for wine lovers.

If or when you do, you might want to whisper your fond thanksgivings to the gnarly wooded plants, standing in rows like bloodied, indefatigable soldiers, for another year of heroic labors, and for bringing the prosperity that has made Lodi the largest winegrowing region in America. You may even want to sing them, as they make their leafy beds in preparation for another wintry nap. For many of Lodi's oldest vines, marking the end of another cycle, going on 100 years or more. La-di-da, di-la-di-dum, 'tis Autumn! 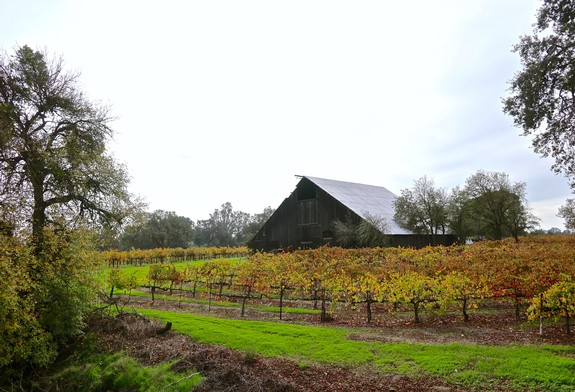