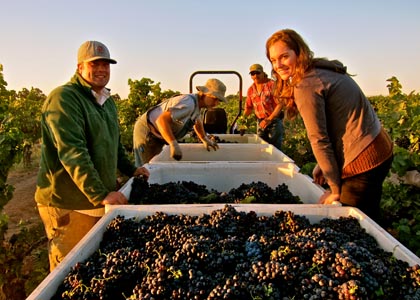 The well known phenomenon of “old vines” is, first of all, the fact that they tend to produce more intense wines because older vines naturally set lower crops.  Bechthold Vineyard, planted in 1886, is as old as it gets for Lodi – an American Viticultural Area replete with vines planted prior to 1960 (although the label designation “old vines” is unregulated, for our purposes what we call old vines would be vineyards with vines planted over 50 years ago — but there is more, much more, to the story.

Although Al Bechthold, who personally farmed the Bechthold Vineyard from the mid-seventies to 2007, tells us that these Cinsault vines still produce as much as 4 tons per acre in a good year, in actuality the yield in this 25 acre vineyard’s upper half – where the water table runs lower and the vines are smaller (1 to 2 feet shorter than the vines on the other side, closer to the drainage canal) – is closer to 2 tons. 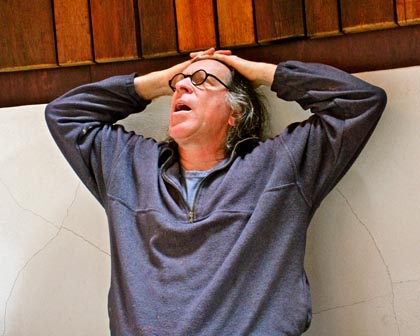 Bonny Doon Vineyard’s Randall Grahm, who gets the lion’s share of the north side of the vineyard, knows the significance of Bechthold’s old soldiers, as well as its Lodi provenance, through his experience with the grape grown elsewhere. He has planted Cinsault in his own vineyard in Salinas Valley, and he tells us that, when young, Cinsault vines are “a beast… we’d have to beat it back to get it to produce less than 10 tons an acre, and then beat it back some more to get it to produce wine anywhere near acceptable quality.”

Hence, Grahm’s thorough appreciation of Bechthold’s 126 year old vines, which set down their roots deep into the region’s classic Tokay sandy loam so long ago – in the late nineteenth century when water tables beneath the Delta region farmlands were significantly higher, allowing early vignerons to dry farm with ungrafted rootstocks – that today these vines continue to thrive while regulating their own fruit production, without a lot of human intervention:  the hallmark of “old vine” viticulture, both in the U.S. and in Europe.

According to Tegan Passalacqua of Turley Wine Cellars (who gets a good chunk of Bechthold’s mid-section), “wet years, dry years, early years or late years – there’s nothing an old vineyard like this hasn’t seen, and almost nothing that it can’t adjust to on its own.” 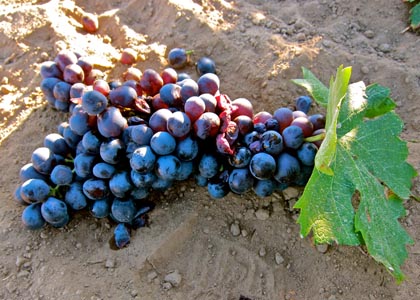 The beauty of this, adds Passalacqua, is that “Bechthold Vineyard defies what a lot of people think of Lodi wines.  It makes a red wine that is not heavy, not high in alcohol, but rather, light and refreshing.  It reminds me of crus Beaujolais in some ways – it has structure, but also high drinkability, and its aromatics are intoxicating, extremely perfumed.  Some say, as a grape, Cinsault makes a simple wine, but we do whole cluster fermentation, which adds a lot of complexity.”

Grahm is even more bullish about the qualities of Bechthold’s Cinsault, telling us “I’ve worked with other California Cinsaults, primarily from Dry Creek Valley, but these grapes really blew my mind.  We do some serious bleeding to get the flavor intensity we like, and the wines demonstrate the varietal like no other vineyard:  dark red morello cherry, with a marvelous perfume, like a confit of candied fruit, and a real elegance – feminine, sleek, graceful, savory, seductive, and strong without being tannic or blocky.  In that sense, there is more in common with Pinot Noir than other Southern French grapes – a superb gastronomic wine.  It also has magical catalytic qualities as a blender with other wines, and is fabulous for pink wine.”

But what really turns Grahm on is “that such an elegant wine can come from a warm climate region like Lodi.”  Jillian Johnson Phoenix, of Napa Valley’s Phoenix Ranch, concurs; telling us that “more and more people are liking the lighter, fruit forward style of wine that Bechthold Vineyard produces, so you can say that the time is more right than ever for this ancient vineyard.” 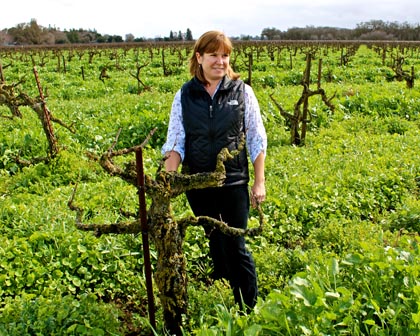 Jillian Johnson, with one of "her" Bechthold vines

If Grahm had his way, there would be more wines made with the delicacy like that of the Cinsault coming from Al and Wanda Woock Bechthold’s vineyard.  “The problem is that there is so little economic incentive for winemakers to make California wines like this.  They can’t get the respect and support of critics, and they can never charge nearly as much as they should.  Musigny might sell for $400, but a wine like Woock Vineyard Cinsault has its own pedigree, its own raving beauty… I adore it!”

What Phoenix also finds “amazing” is the fact that there are now several people making wine from the Bechthold, “and you can appreciate the differences.  Turley picks a little earlier and does a whole cluster fermentation, which gives you more of a Beaujolais style wine.  Like what we did at Bonny Doon, I like to bleed about 25 gallons per ton from the juice before fermenting, which gives the wine more concentration, and we can make a nice rosé from the saignée (i.e. the lightly pigmented portion that is bled off).” 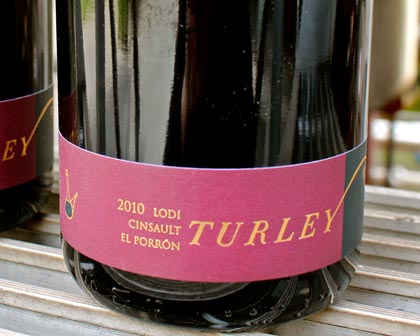 Is the “future” of New World wine behind us, found in these ancient heritage plantings?  Glean what you will, through these notes on the outstanding current releases grown in Bechthold Vineyard:

2010 Phoenix Ranch, Bechthold Vineyard Lodi Cinsault ($21) – The nose here is very flowery and raspberryish, although Phoenix herself finds “strong notes of rhubarb, like a slice of strawberry rhubarb pie.”  The entry is immediately plump, lush and round, downright soft; yet at the core there is a fairly aggressive tannin that gives the middle and overall impression of an inside-out confection, like a raspberry covered black chocolate truffle – unique among all the Bechtholds, likely because Phoenix takes 4.2 acres of absolutely the oldest, most wizened and low yielding vines on the property.  Available at Lodi’s Estate Crush tasting room.

2010 Turley Wine Cellars, El Porrón Lodi Cinsault ($17) – Partial carbonic maceration from Turley’s whole cluster approach to fermentation gives this wine an exuberantly fresh, bright, crunchy confectionary red fruit quality in the nose, with initial perceptions tinged by moderate tannin and a medium body of some delicacy.  In the middle, however, there is just enough underlying tannin to give fleshier, almost meaty sensations, although the feel remains soft and tender through a brightly fruited finish.  Visit turleywinecellars.com. 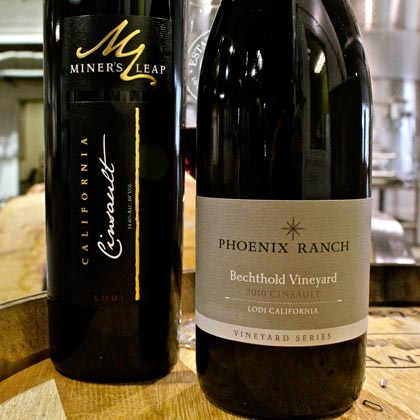 2010 Miner’s Leap, Lodi Cinsault ($25) – Like the Turley, this is a flowery, fresh and easy style of Cinsault; without, perhaps, the carbonic immediacy, nonetheless very soft, pretty, silky and perfumed, like black cherry/raspberry beret.  The middle and finish are marked by notably bright, vibrant fruit acidity, adding zesty/juicy notes to the feminine qualities of this wine’s overall appeal.  Available at Lodi’s Estate Crush, or through minersleap.com.

2009 Bonny Doon, California Cinsault ($20) – Although only 40% of this wine comes from the Bechthold (60% is from Grahm’s Ca’ del Solo Vineyard in Salinas Valley, which has recently been sold), Mr. Grahm contends that this blend is still a full fledged expression of what Lodi old vines can do:  beautifully floral fruit aromas suggesting pomegranate, black cherry, and strawberry fields forever.  The feel is sleek, silky, very feminine.  What was amazing is that the wine seemed even deeper, lusher and rounder after being opened more than 24 hours later – an anomaly consistent with what Wanda Bechthold’s son, Greg Burns (winemaker/owner of Lodi’s Jessie’s Grove Winery) has found in Cinsaults from this vineyard.  Available through bonnydoonvineyard.com, or at the winery in Santa Cruz. 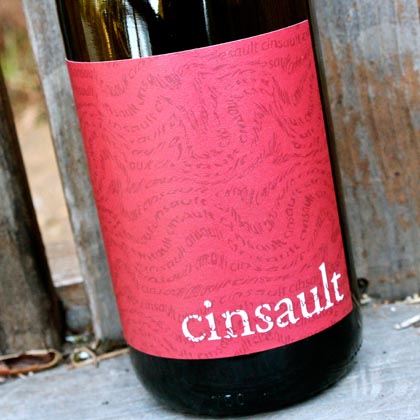 2006 Jessie’s Grove, Sin So Lodi Cinsault ($35) – Although an older vintage, this wine is a recent release; having been bottled only last year, after spending more than five years in neutral wood.  Says Mr. Burns, “the ancient age of the vines gives this Cinsault not just complexity of fruit, but also a very strong anti-oxidative power… I saw it go through peaks and valleys while it was aging, and every time I thought I might have missed its peak, it seemed to come back even stronger.”  Consequently, you’ll find in this bottling a combination of floral, fragrant red fruitiness with maple-ish, almost cararamelized dried fruit tones, like a dusty bowl of stubbornly scented potpourri on a sun splashed windowsill of dark grainy wood.  Initial flavors are lush and silken, while surprisingly strong tannins take over in the middle, giving more of a sinewy, dried flower petal sensation towards the finish.  Available at the winery (see jessiesgrovewinery.com). 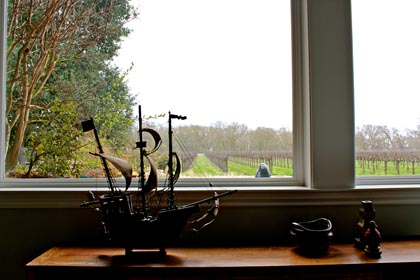 The old oaks of Jessie's Grove, through Wanda and Al Bechthold's window