Lodi enjoys a glorious, oft-times phenomenal, past. This especially goes for what occurred 108 years ago; a time when things were looking really, really good for this burgeoning table and wine grape region.

According to the Lodi Historical Society’s Lodi Historian newsletter (Fall 1990), in 1907...

The grape had replaced the watermelon. The town had just become incorporated (in 1906). Tracks for a new passenger railroad were being laid between Stockton and the 2,000 inhabitants of this proud city. It was spring and the disastrous flood of 1907 had receded...

Charles Ray (a local businessman) put forth the idea of advertising the beauty and value of the Tokay grape by having a large carnival which would make the entire central portion of the state, if not the world, sit up and take notice...

Thus, in the spring of 1907 Lodi citizens swiftly mobilized to put on what was to be a first, historical Tokay Carnival. The celebration was to last three days – September 19 through 21. 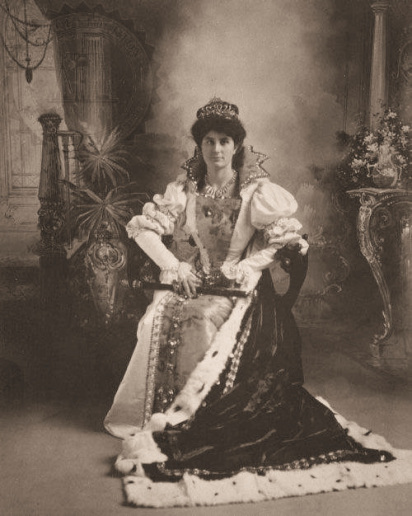 Never mind that these dates fell in middle of harvest. This was precisely the plan. The third week of September was chosen specifically because that would be when Tokay grapes were fully ripened and ready to be shown off in a parade through under no less than two triumphant archs, to be erected just for the occasion: a Mission style “Lodi Arch” with three bells (still standing today as Lodi’s best known landmark); and also extending over Pine St. on the east side of Sacramento St., a temporary wooden “fun arch” containing a bandstand and two theaters, topped by castle-like battlements and waving flags.

In a burst of civic pride and enthusiasm, the Lodi Sentinel editorialized on the citizenry’s plans in its June 8, 1907 issue:

An Executive Committee of 27 men plus some 80 other sub-committees were assembled to plan a contest for a carnival queen, a Wild West Show, live music, and myriad other details. The Lodi Ladies’ Improvement Club met to make plans to decorate a “resting room,” which was to stretch over an entire block, lined with couches and “summer seats.” 100 tents of various sizes were to be set up in Lodi's Southern Pacific Park (east of Sacramento St.) for visitors unable to procure lodging in nearby hotels or residences.

An early 20th century P.R. machine was cranked up. According to Lodi Historian, “citizens agreed to send out as many as 100 postcards to out of town friends and relatives... others took posters to nearby resorts and towns.” There was also to be a press booth; complete with telephone, telegraph desks and a stenographer to assist the press in any way possible; plus lemonade and ice cream to keep the reporters’ energy level on high.

It was to be an educational spectacle, as much as a grapeful display of the eye-opening wealth (see the bold promotional ads put out by the Lodi Board of Trade around this time) earned by this young, prodigious region’s Tokay and Zinfandel driven grape industry. Out West Magazine was one of the publications on hand to file a report in the afterglow of the Tokay Carnival. If you can close your eyes and visualize this:

Packers were at work on the streets packing grapes beneath beautiful arbors: how to plant a vine; how to spray a vine, sulphur a vine, prune a vine, make a graft, pack grapes, load cars, ice a car – in fact, a producers’ show demonstrating the history of the Flame Tokay grape... the magnitude of the product.

Lodi Board of Trade promotional ad

The search for a Tokay Carnival Queen was especially well planned and executed. A ballot box was opened on June 26 in Ross’ Candy Store – a charge of 1 cent per ballot. When the voting closed, Lodi’s Bertha De Almado – an “unusual beauty,” according to Lodi Historian, “with the stature and poise of a genuine queen” – emerged as the first “Queen Zinfandel,” and the 10 young ladies garnering the next highest number of votes (Minnie Harvey, Nina Wilson, Maple Cook, Norma Stannard, Tillie Doering, Helen Dougherty, Gladys Graham, Esther Jones, Inez Smith and Myrtle McClung) were appointed to her royal “court.”

Miss De Almado was given $300 to obtain her royal attire – a sum (adjusted for inflation) equivalent to $7,692 today. As you can see from photographs and newspaper headlines, truly no expense was spared: Queen Zinfandel was to be a living, breathing embodiment of Lodi’s beauty and richness.

20 years old at the time of her coronation and a 1905 Lodi High School graduate, Miss De Almado (later identified in Lodi News-Sentinel accounts as Bertha de Almada, described as "radiant" even into her 80s) would go on to marry Ralph L. Clark; settling down in Lodi to become a mother of two daughters, a lifelong member of the Lodi Women's Club, the White Apron Club of Lafayette as well as a Guild Wine Company member until her death in 1974.

In the morning of the first day of the Tokay Carnival, the Tokay City Band led the opening parade, followed Queen De Almado and her court riding in an “ornate carriage” drawn by four white horses (see September 20, 1907 The San Francisco Call article to the right). The royal party was taken to a platform fashioned in the shape of a large canopied throne room, where “Prime Minister” C.M. Ferdun had the honor of crowning the queen; and George E. Lawrence, Lodi’s President of the Board of City Trustees, presented her with a key to the city.

California’s newly elected Governor, James N. Gillett, and his entourage arrived at the Lodi Depot a few minutes later. He was immediately driven to the queen’s throne room to pay his respects and, of course, deliver a speech. Afterwards, the governor, the queen and her court repaired to the west side of town to enjoy the Wild West Show.

A highlight of the three-day celebration was the Tokay Grape Competition: distinguished judges poring over grapes proudly displayed in harvest boxes. For the record, the three top winners were the Tokays grown and packed by E.W. Leffler, the Sanguinetti brothers, and B.A. Towne.

On Saturday, September 21st businesses in both Lodi and Stockton closed for the grand finale of events. Southern Pacific and Traction Co. railroad cars were said to be packed with passengers headed for “the Grape City” – an estimated 10,000 people, according to The Stockton Record, adding to an estimated 30,000 people attending over all three days.

On the final day there was a “baby show,” another Wild West spectacular, vaudeville acts at the Lodi Opera House, hot air balloons and 1,500-ft. parachute jumps, bronco busting, decked-out automobiles, band concerts, and of course, another grand parade for Queen Bertha and her court, led by Grand Marshal J.W. Dougherty, the Lodi Band, the Third Artillery Brass Band as well as the Grand Army of the Republic (Civil War veterans).

Seeing that the business of Lodi was grapes, and the fact that the grape harvest must go on, growers agreed to hold off picking on the Friday the 20th so that on that in the late morning of the final day there could be a real show of force: an entire fleet of grape laden wagons, coordinated to roll through the streets of Lodi as one. According to Lodi Historian, the “decorated wagons” waited “at the corner near Siegalkoff’s Stables... their 100-plus teams of horses started at 10:00 AM... almost a mile of grapes moved through the principal streets to the various fruit sheds to unload.”

It was, however, planned to be a day of serious, never-ending festivity. At 8:00 PM, George Hogan, carrying the title of “King Tokay,” led a crowd before Queen Bertha and her ladies in waiting. At that point Her Royal Highness graciously “abdicated” her throne, and Tokay Carnival’s new ruler ordered all watches and clocks set back 6 hours. He also ordered anyone appearing on the streets of Lodi without a mask to be subject to arrest.

According to Lodi Historian, the dancing in the streets, and all manner of what-happens-stays-in-Lodi revelry, lasted until 6:00 the following morning (or midnight, according to the King Tokay’s timepiece). At the end of the festivities the Tokay Carnival organizers reportedly sustained a debt of $500, which was later balanced thanks to a benefit given at the Lodi Opera House.

Despite all best intentions, a second Tokay Carnival never took place. The1907 event was deemed a monumental success; but perhaps the idea of ever surpassing it proved daunting. It would not be until 1934 that a similar celebration, the Lodi Grape Festival, would finally take place. It was, after all, the first year following Prohibition – definitely something new to celebrate.