WARNING: Drinking distilled spirits, beer,
coolers, wine and other alcoholic
beverages may increase cancer risk, and
during pregnancy, can cause birth defects.
For more information go to
www.P65Warnings.ca.gov/alcohol . 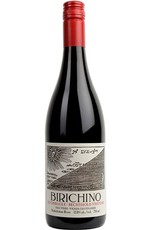 Lest anyone dispute the virtues of old vines, one need only look to Bechthold Vineyard in Lodi. Farmed organically and without irrigation, the soil is rich in granitic minerals washed down from the Sierra Nevada over millenia by the nearby Mokelumne River.

For those new to this wine, the Bechthold Vineyard, planted in 1886, reputedly constitutes the oldest block of Cinsault on Earth close to the Mokelumne River, in a climate moderated by evening breezes from the Sacramento River Delta. This is an historic little neighborhood. The Shinn Family’s old Carignane vines lay around the corner from Bechthold. The Shinns have been farming their land since the 1850s. Even the families are intertwined – Matt Shinn’s wife Evonne is a Bechthold.

No wine is more emblematic of the Birichino style than Bechthold Cinsault Rouge. These are the only grapes on which we perform saignée. They grow in a very hot area, an area beloved and derided for its large scaled, often lazy, high alcohol caricatures. So here we have a somewhat artificially concentrated wine from an indisputably hot area, already known for concentrated wines, produced by a house known for modestly proportioned wines, and yet somehow, unaccountably, it is hardly our lushest red, and indeed our most superficially diminutive. It is important to emphasize the “superficially” bit, for while it tips in at a mere 12.5% alcohol with an unimpeachably civilized greeting; the handshake squeezes more forcefully than anticipated. It acts like nothing so much as an old school Cru Beaujolais – all violets and room temperature molten rock.

Fermentation was native, and elevage was 10 months in a mix of old puncheons and neutral French barrels before we racked it for the first time up into the bottling tank, and bottled unfiltered.

Press: "Lodi’s Bechthold Vineyard may be the oldest cinsault source in California, a dry farmed site on a decomposed granite wash from the nearby Sierras. It can produce cinsault of unusual depth, and yet Birichino’s bottling consistently goes against type for such a warm place: This is just 13 percent alcohol, but punches above its weight with a peppery freshness and verve, light bodied and mildly herbal, with vibrant acids for a charcuterie board." 92 points, Patrick J. Comiskey, Wine & Spirits, February 2021